Antonia Marinucci knew the challenge she was facing in 2016 when she, husband Jeff Green and brother Dante Marinucci bought one of the oldest houses in Ohio City to renovate and sell.

Only historical and cultural significance had saved the early to mid-19th-century Greek Revival farmhouse from the wrecking ball. The Cleveland Landmarks Commission found that it had been purchased and occupied by freed slave Alfred Greenbrier.

Years of moisture accumulating in the sandstone basement rotted the first-floor joists and sheathing to the point that the floor actually collapsed under the weight of a few contractors. And 150-plus years of supporting a sagging roof had visibly bowed the side walls’ structural columns.

“As a restoration architect, the last-case scenario is demo-ing a house,” the owner and principal of Ohio City-based The Architetta architecture practice says. “This one, I will say, structurally speaking, was a wreck.”

But Marinucci was unfazed. Over the next 18 months, she and a team of contractors turned the two-story structure into a showplace that combines historic elements with a modern floor plan and renders amenities in materials appropriate to the house’s age and architectural style. 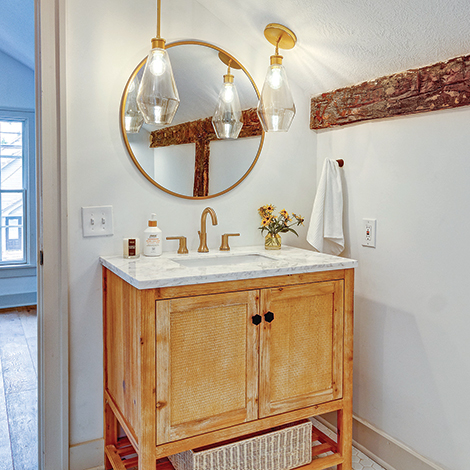 The transformation began with contractors gutting the interiors and reinforcing the fragile exterior walls with triangular wood braces to prevent the house from literally twisting onto itself. They then jacked the house up just enough to install a new first floor — a process that revealed a 4-foot-long stretch of sandstone foundation that required replacing. The visible slope on the second floor was corrected with sleepers, which she describes as thin, hand-cut wooden wedges installed so the thickest portions taper to the thinnest, from the floor’s lowest point to the walls.

A beam was installed under the roof gable. They created a vertical midpoint support and reinforced the front and back facades so they could support the roof’s redistributed weight. Contractors creatively suggested straightening the bowing side-wall columns by placing anchoring hardware on the tops, connecting them with a band, and cranking them up into place.

Outside, existing lap siding was augmented where necessary and painted a crisp white. Marinucci was able to salvage what she believes may be the original trim around the front and some interior doors.

“The keyed tops are a hallmark of Greek Revival style,” she notes.

Inside, the newel post, balusters and handrail of the foyer staircase were incorporated in the construction of a much wider, more user-friendly counterpart. “If not original, they were very appropriate to the Greek Revival style, too,” Marinucci says. The foyer and front room retained what she believes to be their original uses in the floor plan she subsequently devised. But the rest of the 1,600 square feet is clearly designed for modern living. “I like to strike a balance of not too wide open but not too closed off,” she says.

Marinucci finished the house in a timeless simplicity. She ordered the walls painted white and the trim highlighted in a soft, warm gray. The combination contrasted nicely with deep, moss-green Shaker-style kitchen cabinetry. 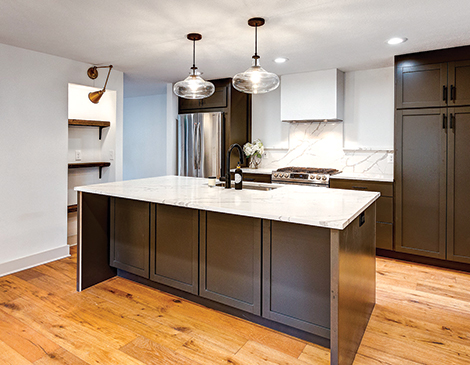 “I felt that this was an earthy, natural color that was unexpected, would age well and also felt a little rustic, like a farmhouse should feel,” she says.

Marinucci says the people who purchased the house, as well as the buyers they sold it to, were delighted with the interiors. Still, she isn’t sure what Alfred Greenbrier would think of her work.

“The two-story portion of the farmhouse is the same configuration that it would have been [when he lived in it] — that’s what historic evidence tells us,” she adds. “I would hope that he would recognize it.”