Bruce Springsteen is almost unrecognizable without his battered 1953-54 Fender Telecaster. Purchased in 1973 for $185, the guitar, a mutt with a Tele body, black pickguard and maple Esquire neck, was Springsteen’s main instrument for 40 years.

“When I put it on, I don’t feel like I have a guitar on,” Springsteen told the Rock & Roll Hall of Fame, which displays the instrument through September as part of its massive Play It Loud exhibit. “It’s such an integral part of me.” 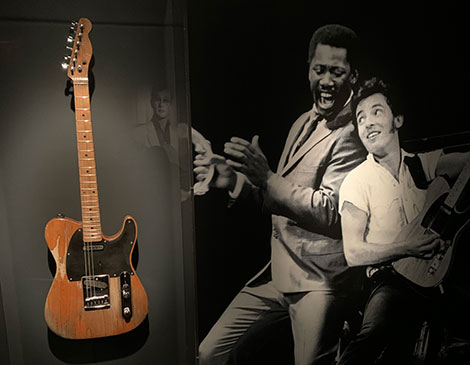 The exhibit, the Rock Hall’s most expansive yet, features more than 130 iconic instruments, but Springsteen’s Telecaster sits center stage.

The now chipped and faded hunk of swamp ash wood first appears pristine on the cover of the Boss’s breakout album Born To Run. Together, they stand bathed in the spotlight on the cover of Live: 1975-1985, commemorating the star’s globetrotting journey to superstardom.

Springsteen’s hands clutch the weathered tool still on 1992’s Human Touch and hold on through 2012, when, seven years after the guitar was taken out of tour rotation for preservation purposes, Springsteen uses it again to record and adorn the cover of LP Wrecking Ball.

“This guitar is a symbol of Springsteen’s storied career,” says Rock Hall curator Amanda Pecsenye. “It’s with him the whole way.” 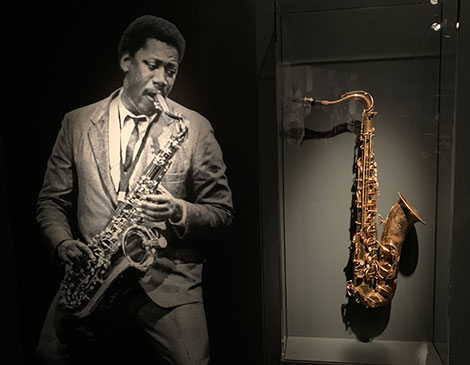 As always with the Boss, Clarence Clemons is close by, his 1967 Selmer saxophone hanging by the ax in the exhibit. The sax can also be heard on Born to Run and remained an emotive element on classics such as “Jungleland” and “Thunder Road.”

“To have that saxophone displayed next to that amazing workhorse guitar, especially with Clarence passing in 2011,” says Pecsenye, “it’s just really emotional and really special.”