Like Thor’s hammer, we deify the tools of our rock and roll gods. The Clash’s Joe Strummer is synonymous with his Telecaster, the Grateful Dead’s Jerry Garcia with custom Wolf guitar, AC/DC’s Angus Young with his black Gibson SG.

Debuting last night, the Rock & Roll Hall of Fame’s new exhibit, Play It Loud: Instruments Of Rock and Roll, gives music fans the rare opportunity to examine every crack, scratch and pick scrape of these iconic instruments. The up-close look at these otherworldly objects elevates the instruments but also proves them to be flawed, tactile hunks of wood.

Curated in collaboration with The Metropolitan Museum of New York City, the three-floor exhibit features more than 130 of the most famous instruments of the 20th Century’s most significant art and cultural movement. It’s the largest single exhibit the museum on the lake has ever displayed, and the pieces range from the first Fender guitar in 1949 to Jerry Lee Lewis’ Petite Grand Piano, to more modern tools of rock and pop, such as Rage Against the Machine guitarist Tom Morello’s innovative pedalboard rig.

“These are the actual guitars — that’s the actual guitar that Chuck Berry recorded ‘Johnny B. Goode with,’” Rock Hall president Greg Harris noted at the exhibit’s opening ceremony Nov. 21. “When you see these instruments that made the songs, you remember who you were with, the greatest road trip of your life and the time your heart was broken. The energy is there.”

We sent our resident guitar nerd to break down a few of the iconic pieces of gear that geeked him out the most and provide a few takeaways from the exhibit. 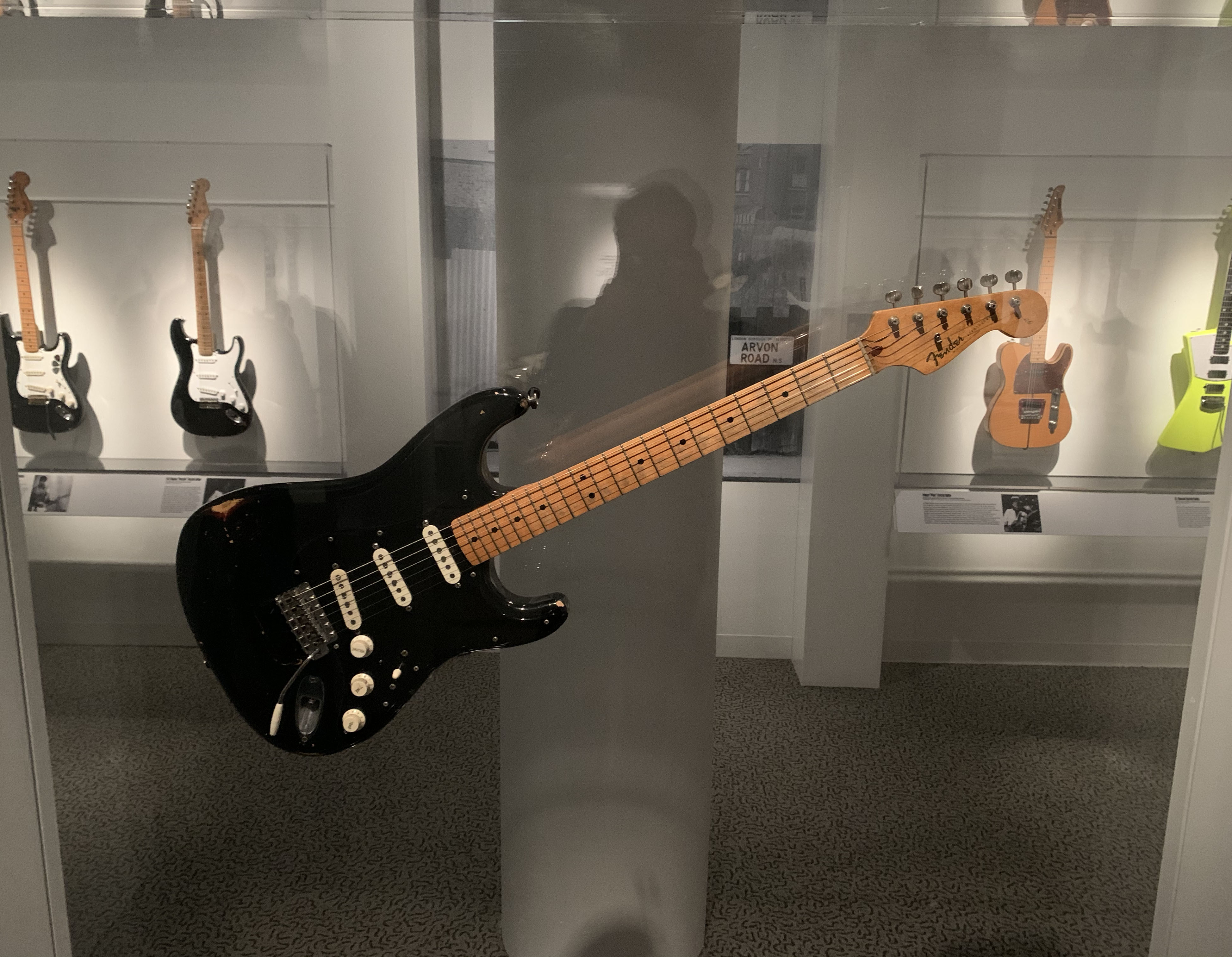 The Black Strat
It’s hard to believe the guitar that sat in the dirt with David Gilmour during Pink Floyd’s Pompeii performance sold for nearly $4 million dollars earlier this year, making the 1969 Fender Stratocaster with a maple cap fretboard the most expensive guitar ever sold. But examining every inch of the two-sided display proves the guitar heard on The Dark Side of the Moon remains in impeccable shape with gorgeous, natural relic, or wear on the wood from Gilmour’s playing hand. 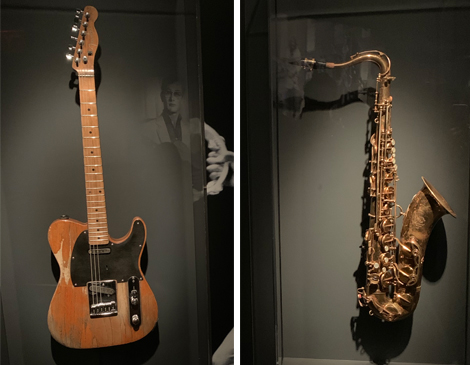 The Boss’s Axe and The Big Man’s Sax
Bruce Springsteen and the E Street Band made its bones in the clubs of Cleveland, so it was cool to see Springsteen’s iconic 1952 Telecaster-Esquire composite and the 1967 Selmer Mark VI saxophone of Clarence Clemons, who died in 2011, put on center stage. Springsteen’s guitar is the one made famous on the cover of Born To Run. 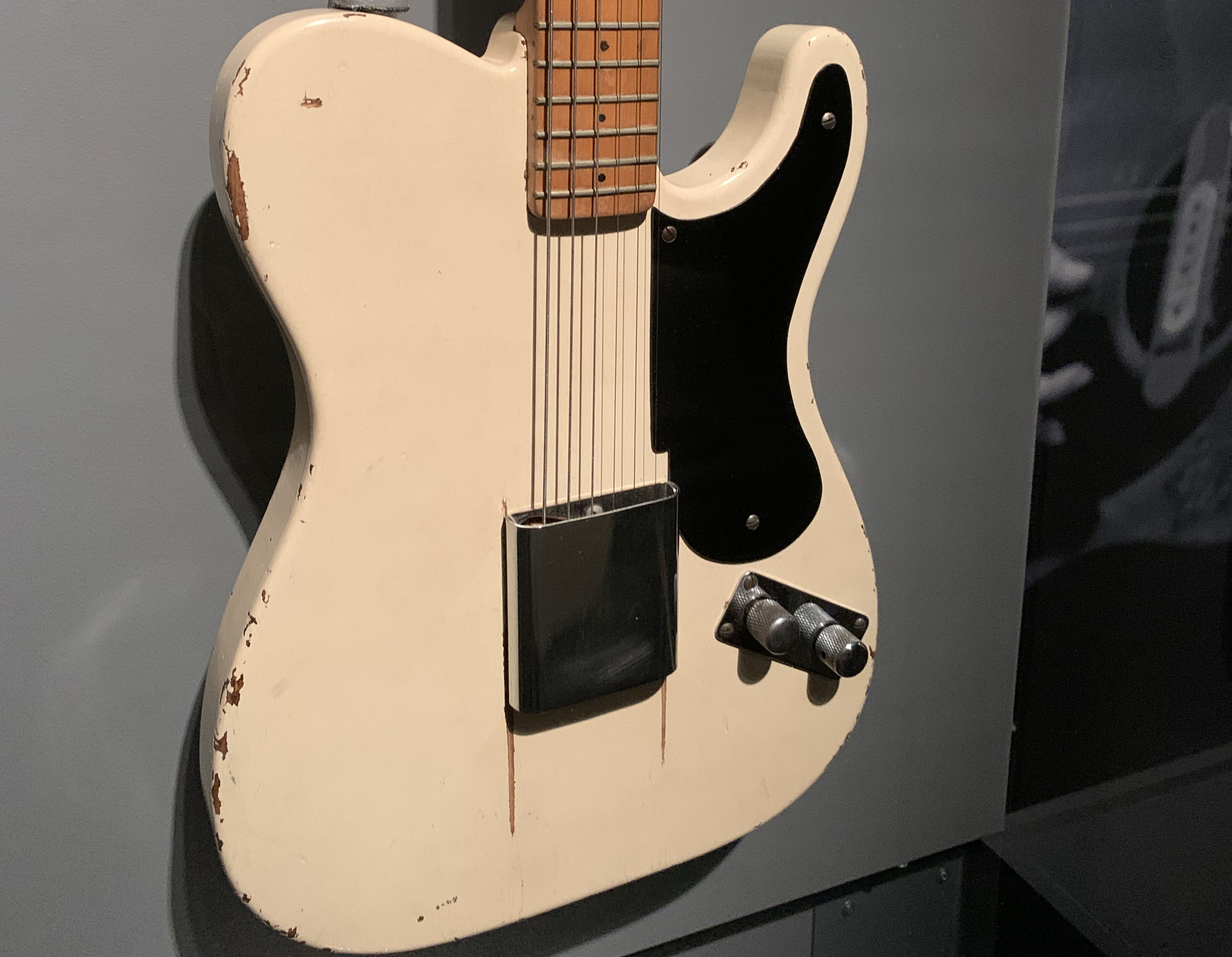 The OGs
Instead of realizing how far they’ve come, seeing some of the first guitars ever makes you realize how similar to the originals they remain. Leo Fender’s 1949 prototype, the first solid-body electric Spanish guitar is pretty similar to today’s model of Fender Telecaster. Meanwhile, Les Paul’s “The Clunker,” which features a big body and an early tremolo bar, makes you realize why the paired down model stuck. 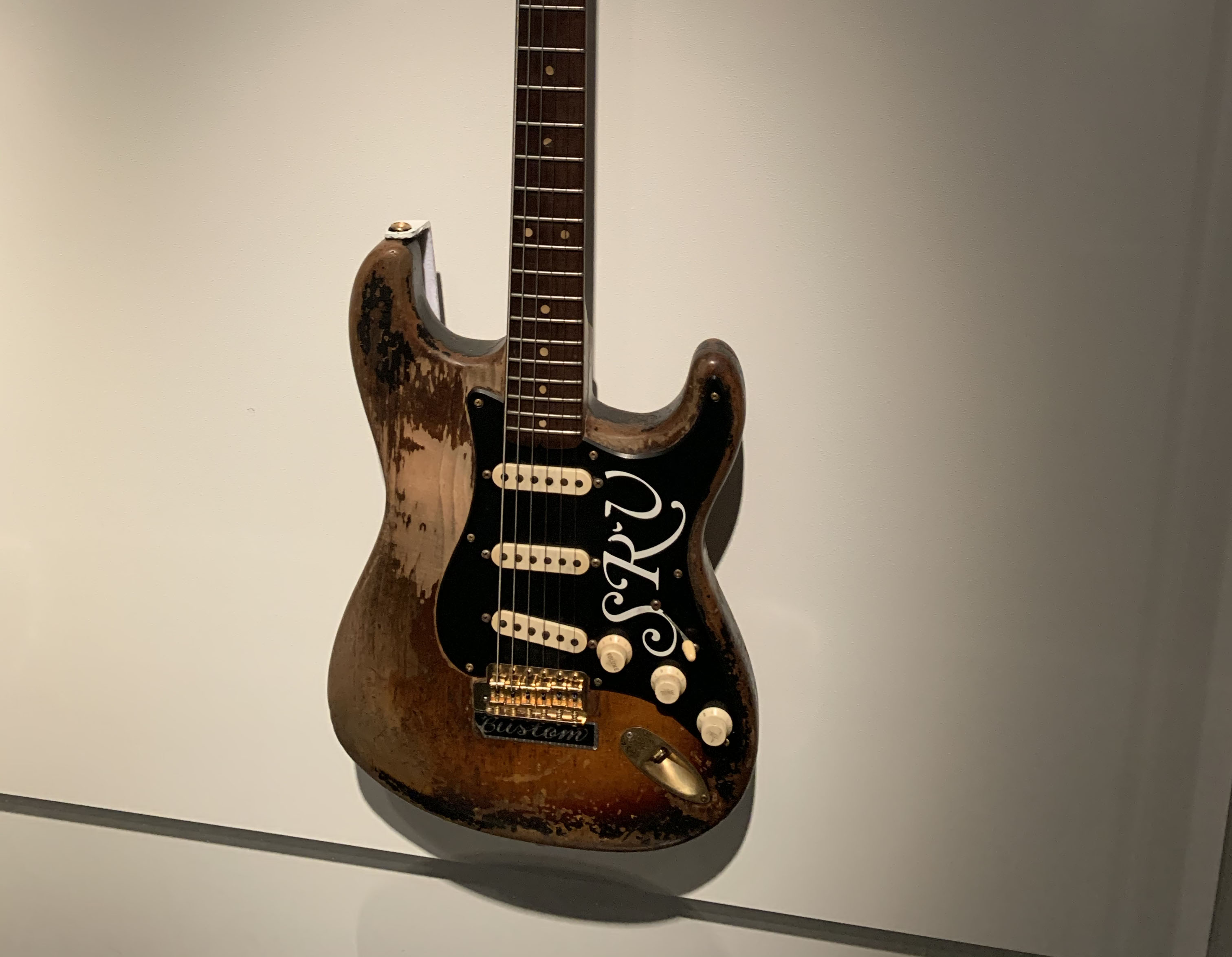 Not So Pretty
What might be surprising to many is the poor condition of most of these iconic instruments. Stevie Ray Vaughan’s “Number One” guitar looks like it’s been attacked with sandpaper. Eddie Van Halen’s “Eruption” Frankenstrat has a hole in the middle of it exposing its wiring. You can truly see thousands of hours of shows, practice and tinkering in each crack. “This stuff is actual tactile stuff,” says Harris. “These are workers’ instruments. Some of them are so beat up that they have miles and miles of use on them.” 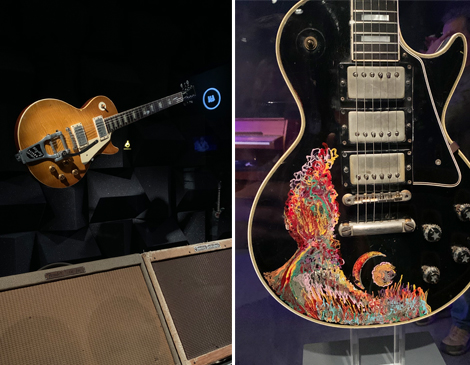 Don’t Wanna Miss A Thing
Big Rolling Stones fans might beeline to see Keith Richards’ Fender Telecaster, only to see a sign that read “This instrument is currently in use by the artist on tour.” Among other instruments that didn’t make it over from the Metropolitan Museum of Art’s version of the exhibit were Led Zeppelin guitarist Robert Plant’s dragon-painted Fender Telecaster and Supro Amp, which was used to record Zeppelin I (he didn’t want it to leave New York City), Lady Gaga’s ArtPop piano, Bob Dylan’s “gone-electric” black Stratocaster and the Beatles’ tour rig. But don't fret Stones fans, two of Richards’ Les Paul guitars are displayed along with his amps on the top two floors.

Pro Tip: The exhibit’s so overloaded with guitars and more, that it’s spread throughout the museum. Start in the back of the museum’s bottom floor, then continue up to the special exhibit areas on floors three and four for the rest of the collection.