If you’re more air guitar than seasoned shredder, fear not: the Rock & Roll Hall of Fame’s Interactive Garage still welcomes you. Opened in July, the hands-on exhibit offers more than 30 instruments for visitors to play, including total newbies.

“We wanted to be able to cater to people who’ve literally never touched an instrument before,” says Mandy Smith, director of education. In five-minute video tutorials featuring the Hall’s educational staff, 16 tracks from inductees are used to teach skills on guitar, keyboard, bass and drums. 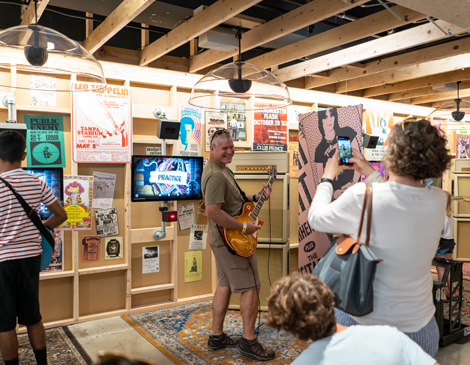 Learn the bass-ics on this example of Nirvana’s ear for moody melody. The track walks through the mechanics of string-plucking. “During the verses and part of the solo, there’s actually only two notes,” says Smith. “On the first, you just pluck it and it’s an open string. On the second, you just push down on one of the frets, or spaces on the neck, to change the note.”

Known for the iconic riff every guitar student plunks through, it illustrates power chords, the heavy two-note backbone of countless tracks. “We made it easier than what Richie Blackmore plays,” Smith says. “It’s hard for beginners to move between strings, so we moved the chords to be played on the thickest string closest to the top of the guitar.”

The Purple One’s ode to the apocalypse showcases block chords, or notes played all at once that add a rhythmic underscore to the melody. “Those exact chords don’t appear in a lot of songs, but the idea of big block chords do,” says Smith. “It also introduces what synthesizers sounded like in the ’80s.”

Feel tre cool on this alt-rock smash as you learn a standard backbeat pattern, what Smith calls the “rhythmic foundation for all rock ‘n roll.” “It lets you learn this very basic rock beat at a slower tempo. It’s the same drumbeat you’d hear in more traditional punk rock, just then, it’s a lot faster.”
Share this story:

The iconic Cleveland rapper has become an international TikTok star thanks to a snippet of a forgotten 2007 freestyle.

Led by violinist and director Ariel Clayton Karas, the genre-less strings group has performed on dozens of yards and porches across Cleveland.

With a limited capacity and safety precautions, the Rock & Roll Hall Of Fame is offering a local music spotlight with food trucks and family fun.