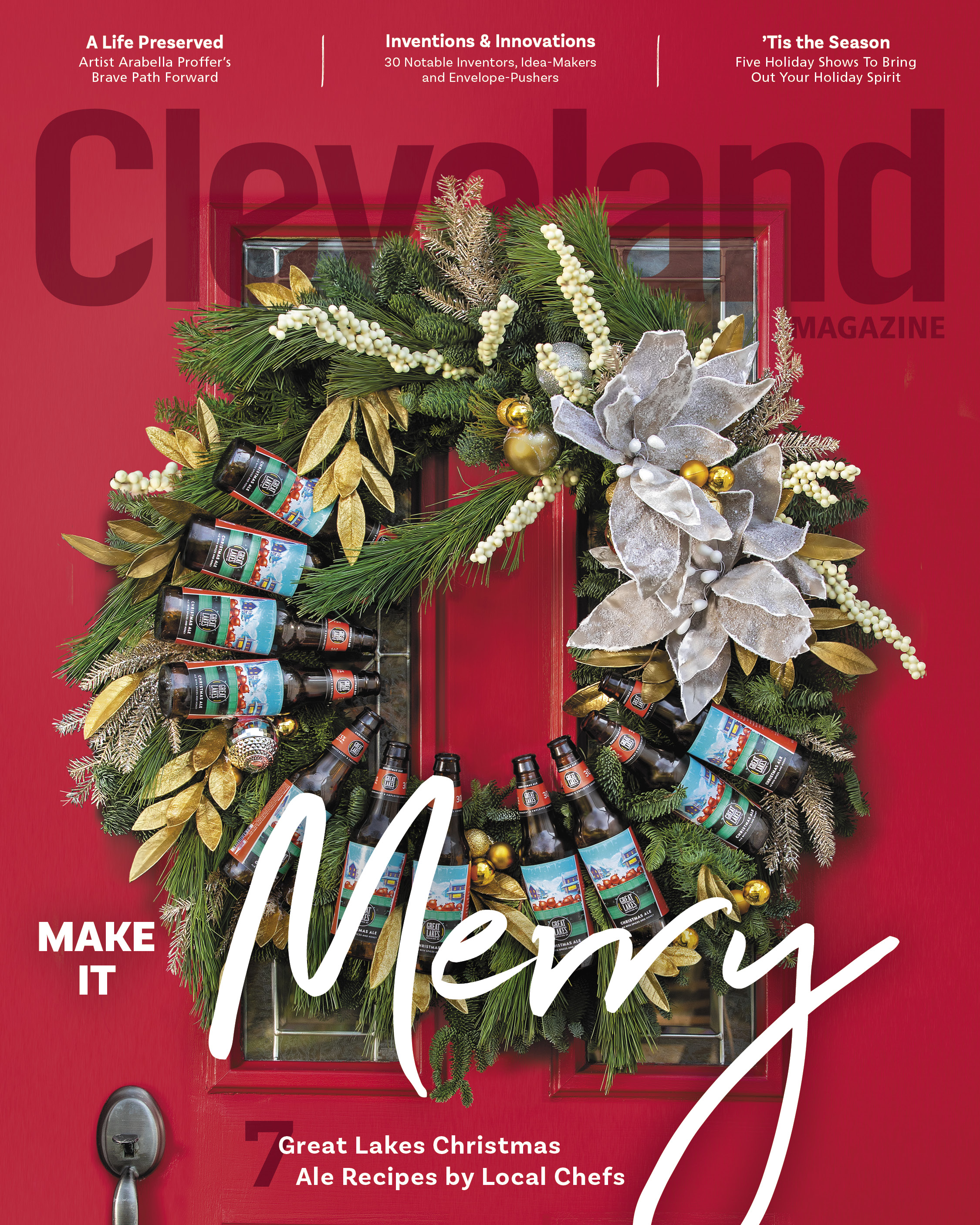 From a Great Lakes Brined Pork Shoulder to Christmas Ale Cookies, here are our favorite holiday treats from Cleveland chefs.

Great Lakes Brewing Co. sparked a phenomenon when it created the beer genre in 1992.

From a Great Lakes Brined Pork Shoulder to Christmas Ale Cookies, here are our favorite holiday treats from Cleveland chefs.

9 Christmas Ales We Love (Other Than Great Lakes)

For some, holiday cheer springs from joyous feelings of peace on earth and goodwill toward all. For others, that cheer comes out of a can.

The editors of Cleveland Magazine share the best local dishes they ate in November.

The Berea restaurant goes big on incorporating spice, sweetness and citrus notes in virtually every taco.

The eatery, which opened in August, dishes out meals that are quick and full of flavor.

Great Lakes Brewing Co. sparked a phenomenon when it created the beer genre in 1992.

Before he was the most hated man in Cleveland, he built a dynastic football program.

3 Northeast Ohio Photographers Share Why Cleveland Is Their Muse

If you're anything like us, your social feeds have been filled with vibrant images of Cleveland. We spoke to three photographers to find out why Northeast Ohio is so photogenic.

A Look At The New Collision Bend Transformative Plan

Put forth by Bedrock, the owner of Tower City, the plan will drastically reimagine downtown Cleveland's connection to the Cuyahoga River.

After being diagnosed with terminal cancer last year, the prolific artist looks back at the work she created while forging ahead with resilience.

What do the Webber piano and the full-body x-ray have in common? They were both created by Dayton Miller.

Cleveland Inventions: A Look at the Cleveland Clinic's 65 Years Of Cardiac Innovations

From completing the first stopped open-heart operation to broadcasting the first keyhole surgery, the Cleveland Clinic's impact on cardiovascular health can't be overstated.

While lesser known, his contributions forever changed the auto industry.

Thanks to innovations in the aluminum market, Oberlin grad Charles Martin Hall became the vice-president of the Aluminum Company of America.

In 1926, employee Dr. Waldo L. Semon changed the future of plastic with the invention of PVC.

Cleveland Inventions: Charles Brush Was The Inventor On Millionaires' Row

The iconic inventor and former MIllionaries' Row resident has a long history of innovations in Cleveland.

Anyone who's ever seen a movie in a theater has Cleveland to thank.

Harvey Firestone's impact on the tire industry (and the makeup of Northeast Ohio) can't be understated.

Everyone knows that Clevelanders love their Ballpark Mustard. But what else started in our backyard?

Known for his many inventions including a gas mask and three-way traffic signal, inventor Garrett Morgan made history as a notable Black inventor and businessman.

After conducting an experiment to observe the triple point of graphite, Roger Bacon changed how we think about carbon fibers.

In 1956, the husband and wife duo invented Clinistix, a game-changer in diabetes research.

Since 1972, John Spirk's and John Nottingham's company has been the brain power behind many well known devices and innovations.

A local inventor and entertainer, Charnas is on a mission to prove that science can be imaginative and fun.

Admit it, we all hate mowing the lawn. But thanks to Lewis Miller, the arduous process is a little bit easier.

No need to be negative, one Clevelander's positive impact on the alkaline battery has made sure that everyone has all the power they need.

Cleveland Inventions: Maria Telkes Was A Leader In Solar Power

One of the first women to be employed at the Cleveland Clinic as a researcher or scientist, Telkes was ahead of the curve in terms of solar research.

Chances are you're reading this story on a Liquid-Crystal Display screen.

Cleveland Inventions: The City of Rock Gave Average People The Ability To Record

Ever recorded a voice memo? If so, you used the distant evolution of the consumer tape recorder created by Cleveland resident Semi Begun invented in 1935.

Without Coburn Haskell invention, you'd never have an excuse to throw your nine-iron in a pond out of anger.

Cleveland Inventions: The Ion-Propelled Aircraft Took Off In 2006

Thanks to Ethan Krauss, the Ion-Propelled Aircraft has achieved manless flight.

We all love Lake Erie. Thanks to these locally invented mechanical wonders, the Great Lakes became key shipping ports.

Cleveland Inventions: The Portable Electric Vacuum Cleaner Is Started By A Cleveland Janitor

If it wasn't for Canton department store janitor James Murray Spangler's relentless cough, who knows if the upright vacuum would have been invented.

Cleveland Inventions: The Steam Generator Set The Groundwork for the Auto Industry

Before Henry Ford blew the top off the auto industry, Rollin Henry White helped advance it with the steam-powered automobile.

Cleveland Inventions: This Bionic Arm Was the First of its Kind

Dr. Paul Marasco and the Cleveland Clinic are working to create a prosthetic that has motor intent, touch sensation and kinesthesia all run seamlessly together.

Cleveland Inventions: This New Device May Prevent The Airborne Spread of COVID-19

Co-founder of MedAir Labs in Solon, Dr. Bill Keida gives us the scoop about Serenio, a device that neutralizes coronaviruses in contiguous spaces up to 1,000 square feet.

Yes, that Thomas Edison. Before he came a part of the American history books, he was a resident of Northeast Ohio.

Just honored as the best park system in nation, the Cleveland Metroparks is far from done.

Editor's Column: Cheers To Us

What do Great Lakes Christmas Ale and the vaccuum sweeper have in common? They're both great Cleveland innovations.

Along with changing the dynamic of the west side of downtown, the company is hoping the new location changes the employee experience.

The Face Of Cosmetic Dentistry

The Face of Exceptional Dentistry

The Face Of Winning

The Faces Of Accounting

The Faces Of Family-Run Collision Center

The Faces Of Luxury Homes

The Faces Of Organized Dreams

The Faces Of Roofing

3 Holiday Theater Productions To Catch Before the Season Ends

From A Christmas Carol to Wicked, it's not too late to soak in the holiday spirit and restart a family tradition at one of these shows.

How Ray Flanagan Used Monthly Releases To Refocus His Art

This fall, Cleveland joined Rome, Italy, as the only cities to hold all six pieces of the collection.

Two local shop owners break down some unique, creative and personalized ways you can wrap and decorate your gifts this year. Plus, you'll be helping the planet out as well.

How To Make A Festive Holiday Garland

Cleveland mom and Etsy owner Leslie Huffman shares a decorative garland that is fun for the family and looks amazing on a mantle.

With its wicker textures, blue tones and modern elements, this home redesign from Style by Ark is a breath of fresh, lake air.

How To Make A Festive Holiday Garland

Cleveland mom and Etsy owner Leslie Huffman shares a decorative garland that is fun for the family and looks amazing on a mantle.

Itching to make something handmade for a loved one? Check out these unique crafting classes from Yates Perfumes, Cool Beans Cafe and Stitches & Stowaways.

The historic shopping center, which opened in 1890, uses 5,000 feet of garland and 250 bows to ring in the holiday season.