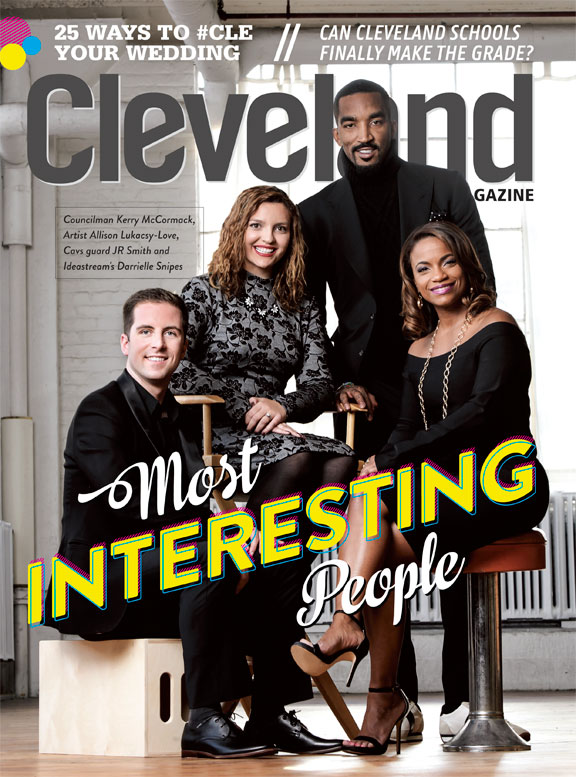 3 Smoothies to Make This Month

Stick to your New Years resolutions and break out the blender with these simple and tasty recipes.

5 Bowls of Pho To Slurp On

Warm up with these versions of the comforting Vietnamese soup.

A Meal We Love: $5 Ramen Nights

The college staples graduates to new heights at Lakewood's Yuzu.

Health Benefits: The Six Ingredients You Need to Eat Now

Kick off a healthy 2017 by stocking your kitchen with watermelon, sardines and more.

Is Strongsville the hottest dining destination in Northeast Ohio?

With a menu of new restaurants the suburb ups its grub game.

Sure there's pepperoni but you'll want to nab a slice of the earthy Wild Mushroom pizza at this Chardon spot.

1981: Ballet Dancers Frolic in a Field

The dancers were from the celebrated Cleveland Ballet.

A Guide to Getting Fit and Healthy in 2018

Keep your New Year's resolution with these exercise hot spots, three local probiotics and a friendly competition that will get you out of the house.

Under CEO Eric Gordon’s leadership, the Cleveland Metropolitan School District has improved graduation, enrollment and attendance numbers. The district even passed the test of a November renewal levy. But possible changes to graduation standards and looming negotiations with the teachers union could hold him back.

Our clothing is more than just a style statement. Certain pieces hold sentimental value and are a reflection of our past.

2016 was a year of champions, conventions and new places, but those accomplishments didn't happen overnight.

Glenn Anderson Steps Up to the Mic

The longtime sidekick finally has his own radio show.

Clevelander (and genius) Peng Zhou joined 10 other kids on a D.C. visit to talk science and more.

The artist and architect keeps us guessing with works using anything from cigar tips to urine.

The Cleveland Indians pitcher possesses a nasty slider and mid-90 mph fastball that helped him win the ALCS MVP.

The queer feminist and zine publisher isn’t afraid to discuss depression and sexuality.

The U.S attorney for Northern Ohio continues to work on the most pressing issues facing the region, including the heroin epidemic and police reform.

The Cavs event and arena marketing manager got the ultimate task of planning the city's biggest party of the year.

The mother of three pulled from her own experiences to create a line of pregnant mommy-friendly active wear.

The WKYC traffic reporter rose above criticism and now is shining a light on others who have overcome obstacles in their own lives.

The WVIZ PBS Ideastream reporter grew up with a passion for asking questions and telling stories.

After her car was broken into, the designer turned the broken glass into beautiful pieces of jewelry.

The DJ empowers kids to breathe fresh life into their neighborhoods through summer camps, arts education residencies and after-school programs.

The artist creates bright abstract paintings with his beard.

The former business agent did what you dream of — he quit his job to start a brewery.

The Land Studio project manager puts his own artistic stamp on Cleveland.

The youngest member on city council has the potential to reinvigorate the city with a progressive community-based approach to politics.

The local entrepreneur and investor showed us the true meaning of hustle on the LeBron James' reality show Cleveland Hustles.

The high school junior is the No. 1 ranked wheelchair fencer in the U.S. and the winner of three national championships.

The author's whimsical tale is getting transformed into an interactive, multisensory theater experience at the New York City Children’s Theater.

The community activist is making our city more diverse with the Cleveland Asian Festival and her efforts to spread awareness about Asian cultural events to all.

After 11 years of studying, the Clevelander got her GED at 52 and is now an advocate for adult learning.

The new Cuyahoga County prosecutor takes office this month with plans to listen to the community and have open conversations.

Since arriving in July, the Cleveland 19 News reporter has tackled covering the Cavs parade and the World Series.

The Brewnuts couple taps into Cleveland's craft beer and dining renaissance with its tasty treats.

The Land writer and director continues to push for honest and raw stories with his latest project.

The Inner Bliss Yoga Studios owner and Believe in CLE founder has taken yoga to the masses.

The Cleveland Browns wide receiver was a bright spot during the team’s losing 2016 season.

The Lake County NAACP Chairman of Religious Affairs returned to school at the age of 60 when he received an epiphany from God.

The health care entrepreneur saves kids, climbs mountains and has a black belt in karate.

Born without the lower half of his body, the former high school athlete proves hard work can pin any obstacle.

Remember That Time a Statue of a Naked Donald Trump Showed Up?

This Timeline of 2016 in Cleveland Has all the Right Moves

You lived it, Cleveland. Now remember it.

Three Ways to Get Off the Couch This Month

From live-streamed yoga to some peaceful floating, we're here to help with your resolutions.

Turns Out the Election Wasn’t a Surprise After All

University of Akron political science professor John C. Green says signs of a Trump win were there all along.

Two Cleveland history buffs give us the for and against.

From favorite old school haunts to public luminaries, we remember some of the people and places we lost last year.

Why Are We Such Cold Weather Wussies?

Folks in Northeast Ohio complain about chilly weather. A lot. But is it really that bad?

A Popular Haunt for Horror Films

Grab your popcorn and hold onto your Snowcaps: we’re buttering you up with these sneak peaks of Cleveland-centric films premiering on the big (and small) screens this year.

Cleveland Opera Theater lifts the curtain on experimental works and pop-takes on the classical genre.

Police and Civilians Unite For A Photo Story

The Black and Blue Side by Side project has a gallery opening this month.

The Top 3 Pop Culture Uses for Rhapsody in Blue

George Gershwin's jazzy composition pops up all over.

Learn more about our feathered friends at the Cleveland Metroparks' Hootenanny.

Be-Jeweled: We’ve Got the Home Decor Color Forecasts for 2017

Sherwin-Williams’ deep greens and moody blues are trending. Here’s how they can work on and off the walls.

Three tips to take full advantage of walking down the bridal show aisles.

How to CLE Your Wedding: 3 Must-Have Photo Locations

Capture unforgettable moments during your big day with pictures at these quintessential Cleveland spots.

How to CLE Your Wedding: Beautiful Backdrops

Give your guests a unique glimpse of Cleveland with several impressive views throughout the area.

How to CLE Your Wedding: Cleveland Dessert Menus

Guests will experience a sugar rush after indulging in local treats, whether it’s for a dessert table or wedding favors.

How to CLE Your Wedding: Do-It-Yourself Ideas

Add a personalized touch of Cleveland to your nuptials with one of these DIY projects.

How to CLE Your Wedding: Iconic Venues

Incorporate legendary Cleveland landmarks into your wedding or reception to wow guests with our remarkable city.

How to CLE Your Wedding: Planning Tips

Set the tone for your wedding day with a nod to everything Cleveland.

We pick the best snow, casual and trendy boots to stock your closet with.

Cardiovascular disease is responsible for one in four deaths each year in the U.S. But area hospitals are working on better ways to diagnose and treat this killer.