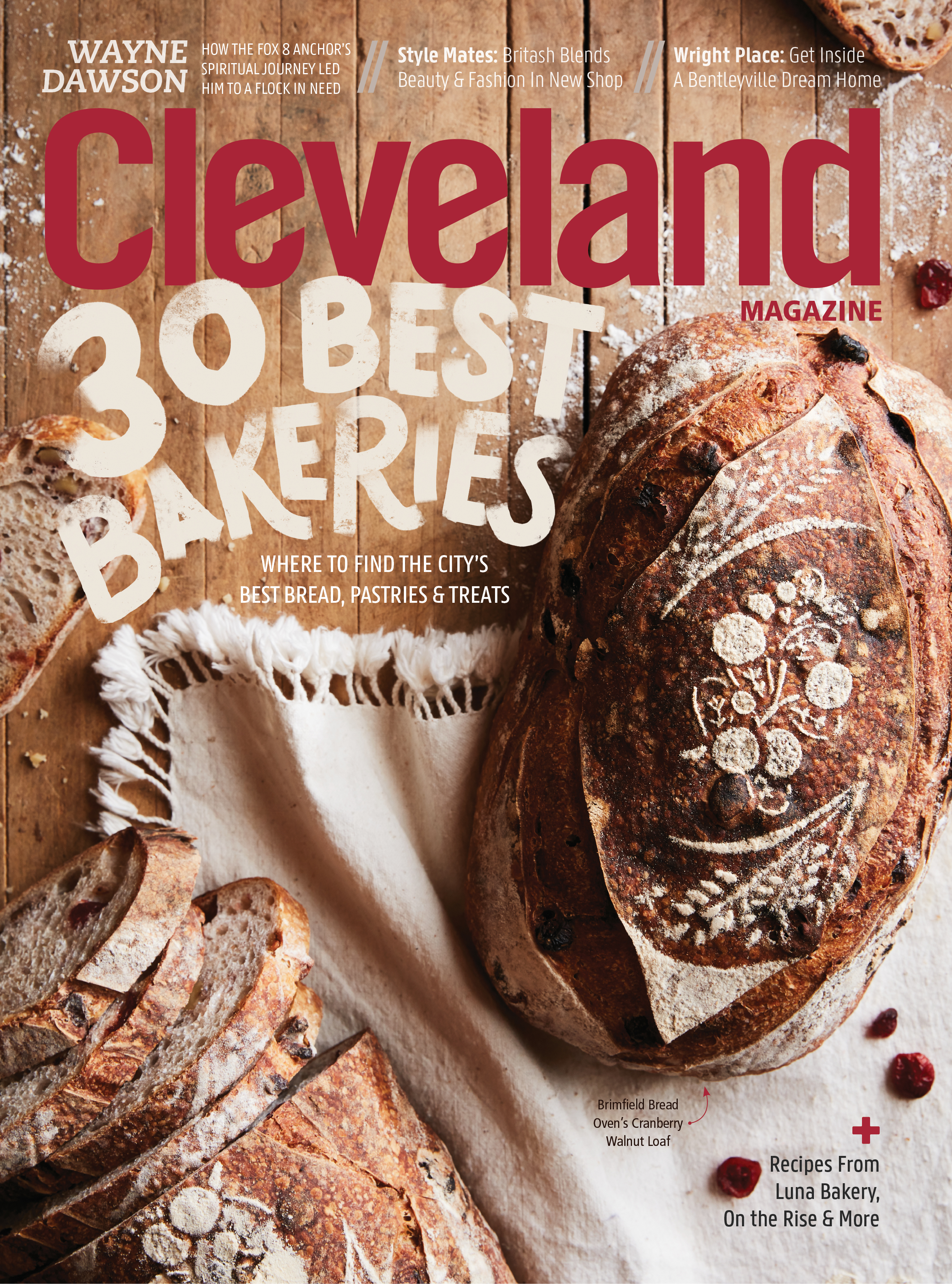 From the creators of Edwins, the Medina restaurant offers refuge and development to those fighting substance abuse and addiction.

Knead more kolacky, nut rolls and sourdough in your life? We're fans of local bakeries — some that use Old World techniques and others that roll out modern, inventive baked goods. Any way you slice it, these 30 spots rise above.

5 Sunday Menus To Elevate Your Tailgate

Win or lose, we still chow down at Thirsty Dog, The Burnham, Collision Bend and more.

5 Turkey Techniques To Spice Up Thanksgiving

Chefs from Soho Chicken & Whiskey, Salt and more help us turn the bird into a meat masterpiece.

The Fairview Park pastry shop has been perfecting its bake since 1946.

Downtown's Public Square bakery is breaking down barriers for disadvantaged and low-income adults.

The wood-fired oven in Brimfield spits out pretzels, chocolate chip cookies and other German delights.

The Italian bread and dessert store has been a Cleveland classic since 1953.

All nighters in Berea cook up danishes, coffee cakes and more at this bakery, which has been open since 1953.

Ohio City's Lorain Avenue is home to one of Cleveland's most traditional Hungarian bakery.

The Ohio City bakery has a passion for gluten-free and vegan-inspired treats.

The Chester Avenue shop is a croissant-focused spot from a veteran chef.

The Bay Village and North Olmsted bakery is as cosmopolitan as it gets.

The owners of this Hudson shop set aside a business and legal careers for a tastier practice.

This Medina spot offers plenty of vegan options and a whole lot more.

Some of these Rocky River treats are too cute to pass up.

Known for the snoogle, the Amherst confectionery does so much more.

AsiaTown's vendor of Chinese doughnuts and sweet and savory buns serves as a community center.

In Shaker Heights, residents and visitors submit to the sweets of this 61-year-old shop.

Broadview Heights' corner bakery does it all.

In Cleveland Heights, one confectionery is pushing the baking game forward.

The Little Italy staple has staples of its own, including the sour cream-based doughnut and the holy cannoli.

Brunswick's two-story shop is a megabakery that's been featured on the Food Network.

The Polish Village bakery in Parma is blazing a new trail without forgetting its immigrant past.

Traditional Eastern European baking will never die if this Pearl Road shop has anything to say about it.

Northfield's family-owned bakery is proof that wisdom is passed down through generations.

Owner Sabrina Caitlin is carrying on a legacy started by her mother, who founded the bakery and created the treats that made its name.

This Cleveland Heights classic is as no-nonsense as a Swiss watch.

Keeping a bakery going is harder than ever, but beloved makers of Old World treats such as Archie's Lakeshore Bakery let tradition and passion drive them.

Fall In Love With Brunch Again At Hi And Dry

Find Your Turkey At These Three Local Farms

The new business and restaurant incubator on Clark-Fulton is kickstarting Latino-owned companies.

The new Chinese-American restaurant lives in the former home of Ninja City.

Why The Michelin Guide Skips Cleveland

The Hollywood star was arrested in Cleveland while protesting the Vietnam War.

A Gardener Grows Contentious With A Majestic Nuisance

Once nearly wiped out by hunting and deforestation, deer are now as abundant as squirrels — albeit more annoying.

The station, which revolutionized travel with all the amenities of a modern airport hub, turned 70 years old this year.

After purchasing the property of a beloved resident, a Bentleyville family preserved her legacy while building their Frank Lloyd Wright-inspired dream home.

The Ministry of Wayne Dawson

The longtime Fox 8 news anchor has attracted a legion of fans with his enthusiasm, compassion and humor. Now he's preaching to a new flock as pastor of Grace Tabernacle Baptist Church.

What Keeps Young Professionals In Cleveland?

Engage Cleveland's inaugural State of the Young Professionals Community Survey shows what's keeping some young professionals here and what could potentially drive them away.

Why You Should Escape From The Noise

Finding a quiet place is healthy but increasingly difficult in a fast-paced modern world.

The piano player's famous coat is on display at the Rock Hall ahead of his Nov. 3 show at The Q.

The creators of Serial discuss whether national attention is enough to bring real change to Cuyahoga County's criminal justice system.

Steven Caple Jr. Steps Into The Ring for 'Creed II'

The director talks about Michael B. Jordan, Rocky's legacy and more.

Playing at Oucalt Theater, the Pulitzer Prize-winning drama examines the precursor and aftermath of the 2008 economic collapse.

The Choir Releases 'Artifact' After 50 Years

The Cleveland band reunites for two shows at the Beachland Ballroom after finally releasing its lost 10-track, 1969 album.

'Who Killed Amy Mihaljevic?' Podcast Hopes To Find Out

We look at the four clues laid out in the new podcast created by independent journalist Bill Huffman.

5 Tips For Organizing Your Garage

Local pros shows us how to tackle your biggest cleaning nightmare.

Classic Homes of Ohio in Aurora gave the classic structure an 18-month renovation.

As residential gap years increase in popularity, new apartment options such as the Upstairs at Van Aken fill the need.

The boutique took over a renovated dive bar on Mentor Avenue this year.

Knock out your holiday shopping list at these local bazaars.

The Cavs forward breaks down the Xs and Os of his new Banana Republic clothing line.

Build a stronger bond this month by giving back to those in need.

Dr. Beth McLaughlin, chief medical officer at Hospice of the Western Reserve, tells us what it is and why it's important.

Ask The Experts: How to Choose A Facility

Ask The Experts: Importance of Independence

Ask The Experts: Role Of Arts In Retirement Living