While the 2020 Cleveland Browns sit at home this Super Bowl Sunday, fans are once again championship dreaming after the team broke an 18-year playoff drought and took down the arch-rival Pittsburgh Steelers in the Wild Card round. Until then, relive the brown and orange glory days in these black-and-white photos from a few great championship moments. 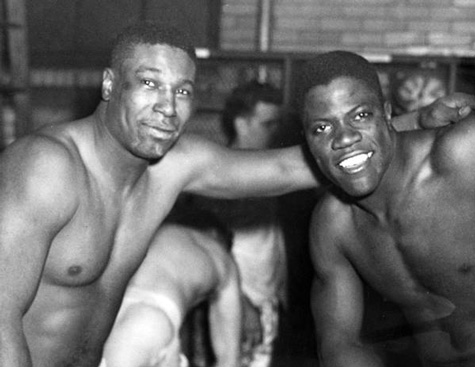 Linebacker and fullback Marion Motley and defensive lineman Bill Willis pose for a celebratory locker room photo after taking down the New York Yankees 14-9 for the Cleveland Browns first AAFC championship in 1946. 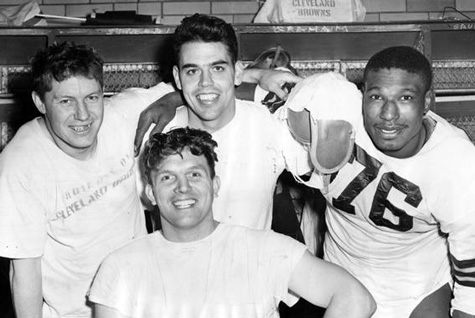 By 1948, winning begins feeling pretty normal for the Cleveland Browns, who celebrate here in the locker room after taking down the Buffalo Bills for their third-straight AAFC Championship. They'd win one more in 1949 before joining the NFL.

New Territory: 1950 NFL Championship
The league's newbies say hello in winning fashion by marching to the NFL Championship game with a 10-2 record in their first season. The Browns would go on to beat the LA Rams in a 30-28 nail-biter thanks to a Lou Groza field goal in front of more than 33,000 fans in Cleveland Stadium. 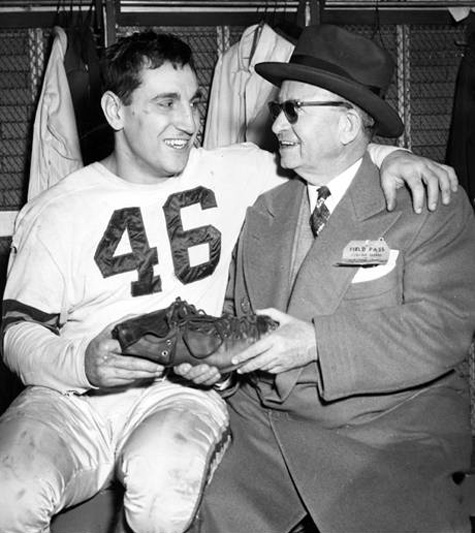 Kicker and offensive tackle Lou "The Toe" Groza shows team owner Mickey McBride what he's paying for as the pair celebrate an 8-3 win over the New York Giants that sends the Browns to their first NFL Championship. 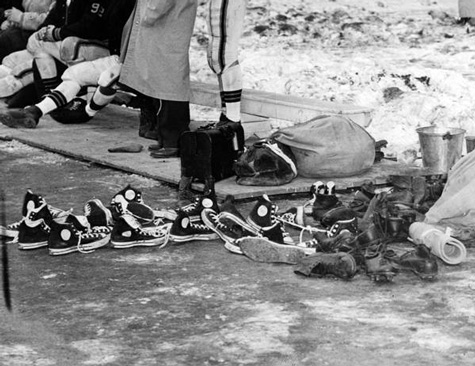 The Cleveland-hosted 1950 NFL Championship game was ice cold. So frozen was the field that players traded their cleats for rubber-soled shoes in the second half to give them better traction on the icy field.

Rams Revenge: 1951 NFL Championship
In their second NFL Championship game, the Cleveland Browns get taken down by the LA Rams in another close one, 24-17, in Los Angeles Memorial Coliseum. Below, the team boards the plane on a snowy runway in Cleveland before the game. 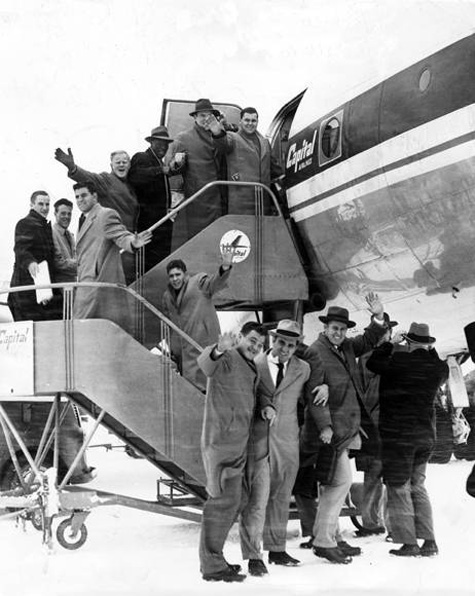 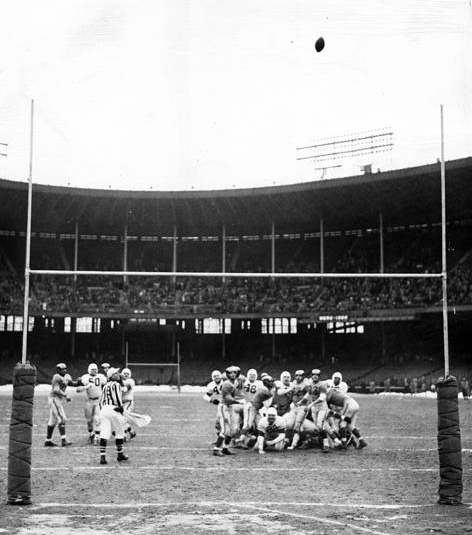 Taking Down The Rivals: 1954 NFL Championship
After two straight championship losses to Detroit, the Browns finally beat the Lions in 1954 in grand fashion, 56-10. While we have no photos from that game, the win was likely thanks to the type of tenacity shown in this regular season game against the Philadelphia Eagles, in which Groza engaged in a post-game spat with Frank Kilroy of the Eagles. The Browns won that game to improve to 6-0 on the season. 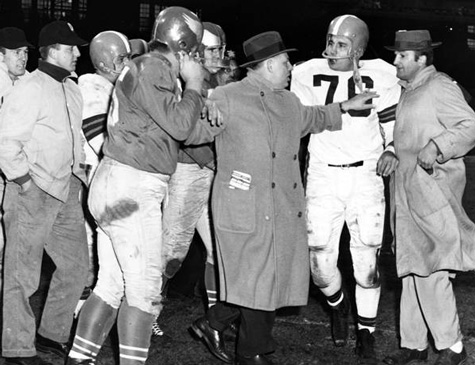 Back-To-Back: 1955 NFL Championship
A stacked Browns team returned to Los Angeles in 1955 to take down the Rams 38-14. Browns legend Otto Graham earned his status that game thanks to two second half touchdowns. The game drew a record 87,695 fans. 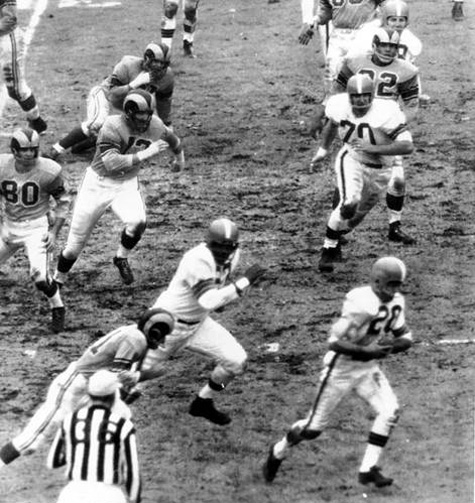 The Browns Don Paul intercepts Rams quarterback Van Brocklin and takes it back to the house for a pick six.

Back Again: 1957 NFL Championship
After not making the championship game in 1956, the Cleveland Browns return with a new running back, Jim Brown. The Lions, however, continue their dominance of Cleveland as they whoop the Browns 56-10. Below, Brown runs for a 29-yard touchdown, Cleveland's only score. 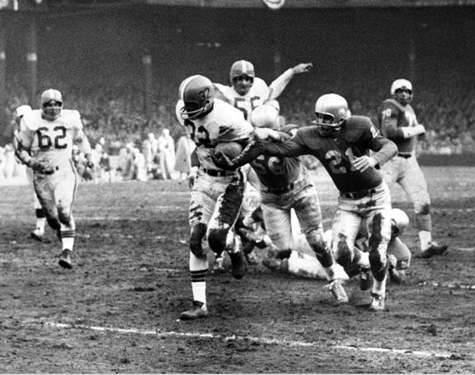 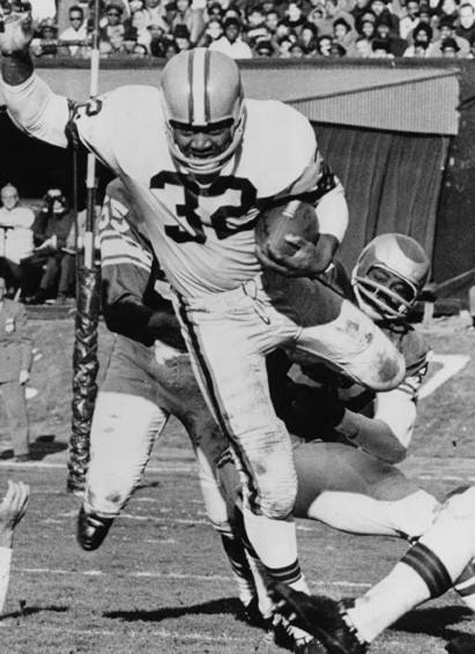 Jim Brown rushes past Philadelphia Eagles defenders during a win in the 1964 regular season. 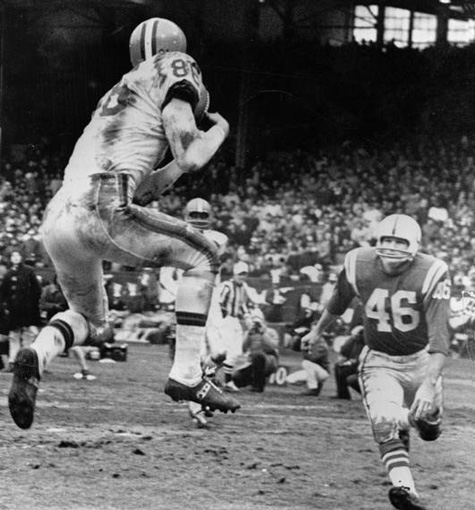 While Jim Brown was Cleveland's stud, wide receiver Gary Collins was the player of the game with three touchdowns against the Colts. 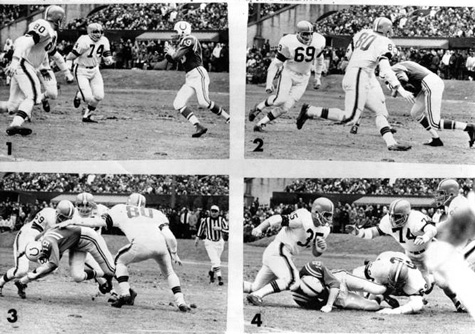 The Cleveland defense shut down Hall of Fame quarterback John Unitas in this game. Here, Unitas succumbs to the defensive line's pressure.

Cemented Legacy: The Late '60s
Browns fans enjoyed success throughout the rest of the '60s. They reached the final game in 1965, 1968 and 1969, but never again tasted an NFL Championship victory. 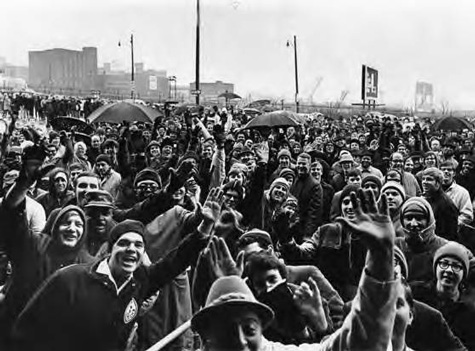 Browns fans wait in line for tickets to the 1968 championship game, hosted in Cleveland. 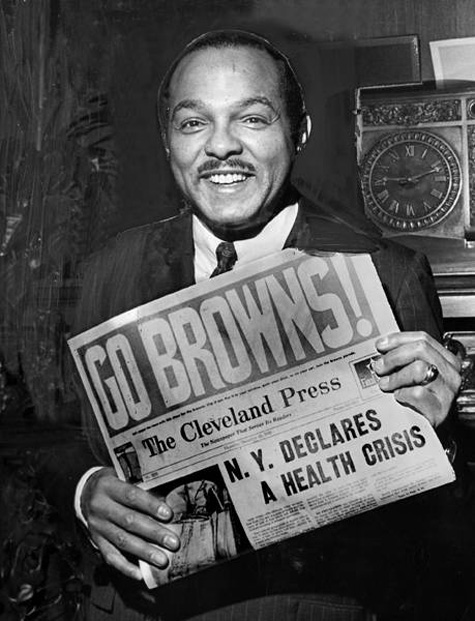 Mayor Carl Stokes holds up a copy of the Cleveland Press ahead of the 1968 Championship game. The Browns would go on to lose that home game 34-0 to the Baltimore Colts.