In golf there are few images as iconic as Firestone Country Club’s water tower. The 125-foot, 50,000-gallon structure was built in 1959 after a fire destroyed the original clubhouse and has since been a feature of every televised professional tournament at the Akron course.

Commissioned by Harvey Firestone as a park for Firestone Tire and Rubber Co. employees in 1929, the modern campus features a clubhouse, putting green, driving range, three private 18-hole courses and a public nine-hole course. Though the more-friendly North Course has hosted tournaments, the South Course’s winding, tree-lined fairways and craterous bunkers have played host to the Rubber City Open, the American Golf Classic, three PGA Championships and, most notably, the WGC-Bridgestone (formerly known as the World Series of Golf) for 19 years.

In 2018, new sponsor FedEx decided to move the WGC-Bridgestone tournament to Tennessee, where the company is headquartered. Stars of the sport, from Tiger Woods to Rory McIlroy, lamented the decision. Locally, the economy took an estimated $25-million blow.

But it’s not a total bogey in Akron. In 2019, the Bridgestone Senior Players Championship, held June 24-27 this year, kicked off a four-year run at the course. In January, news broke that the club had expressed interest in hosting the 2022 PGA Championship. Finally, the club opened opportunities for nonmembers to experience the course through its Stay-and-Play packages.

“Firestone has had a place in championship golf for the last 67 years and it’s got a bright future,” says general manager Jay Walkinshaw. “From Arnold Palmer calling [the 16th hole] the Monster to Tiger Woods’ shot in the dark, every generation of fans can resonate with this course. 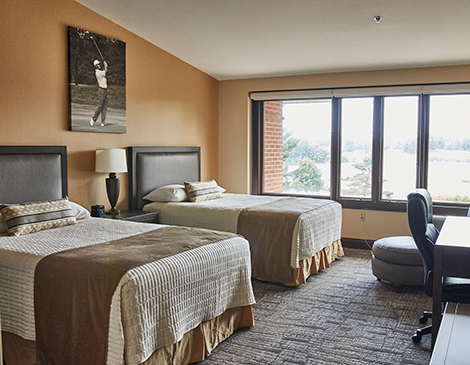 You used to have to know a guy who knew a guy to play on the hallowed grounds of Firestone Country Club. But since 2019, the 54-hole and 80-room private golf campus has opened a new Stay-and-Play experience for nonmembers.

This public package, available spring to fall, offers the ultimate golf vacation with access to each course, villas that overlook iconic holes, private lessons and curated dining experiences. “We built an experience for you that’s start to finish Firestone,” says Walkinshaw. “There’s a casual sophistication to not only playing the courses the legends play but to sit in the dining room where they ate and the villas where they stayed.”

While peak season is the priciest (running from $980 for one night and two rounds to $1,950 for three nights and three rounds, plus more if you want to play the South Course), Walkinshaw swears by the red-hued fall golf experience (starting at a more modest $430-$800). “Aside from just the natural beauty of the changing season, playing conditions are usually very good,” he says. “It gives a variety of golf that not everyone experiences.” 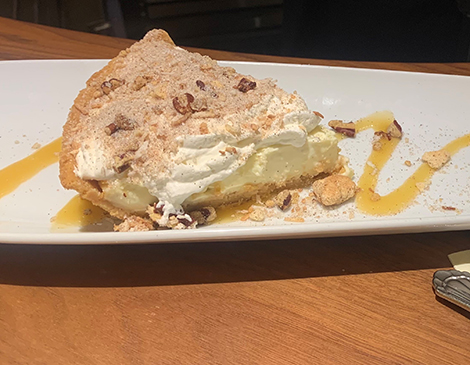 Firestone is out to prove country club food is much more than a hot dog at the turn. Its 1929 Grille & Legacy Pavilion and 55th Hole Bar are dedicated to locally sourced ingredients, house-made burger blends and innovative recipes. Still, there are a few iconic dishes longtime members have come to expect.

Firestone Navy Bean Soup: Soup on the golf course? This hearty Firestone staple made from locally sourced ham hock and navy beans has been on the menu for more than three decades. “It’s a house recipe that’s been perfected over time,” Walkinshaw says.

The Bucket: Served in a Styrofoam cup, this mix of vodka, cranberry juice, club soda and lime is the perfect cocktail to forget about a bad hole or celebrate a great round. “Fifty years ago some member asked for a vodka cranberry to be served in a bucket instead of a glass and it’s just been called that ever since,” Walkinshaw says.

Crunchy Cream Pie: Probably the most beloved Firestone delicacy, this pie is filled with vanilla custard and topped with coconut and toasted pecans. “Some [PGA players] have taken extra to take home with them,” says Walkinshaw.

For the amateur, playing a pro-level course such as Firestone Country Club can be daunting. So we asked director of golf Tommy Moore for a few tips to having a great round.

"When you come out here, getting the ball in the fairway is the name of the game. Every golfer wants to say, “I played Firestone from the tips,” or the longest tees on the course, but if the skill level doesn’t match the playing ability, you turn that round into an unenjoyable event. The average golfer might hit more fairways with a 3-wood or a hybrid club than their driver. If you can combine the right club that gets you to the fairway with playing the correct tees, you’re going to have a very enjoyable day out here." 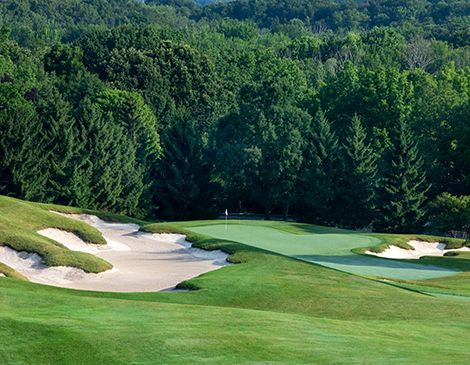 Do not end up in the trees on this intimidating 7,400-yard, 70-par course, which has hosted more than 67 professional tournaments. “The South is a very demanding course,” says Moore. “You’re occupying the same space and teeing off from the same spot that all these legends have played.”

You’ll need every shot in your bag to get through this par-72 course, which offers the most scenic landscape thanks to its hills, lakes, streams and view of the water tower. “The North is my favorite because of the sample size of shots you need to hit,” says Moore. “It’s got 10 of the best water holes.”

They say all it takes is one good shot to keep you coming back. After playing the North and South, this  course built in 2001 is a nice confidence boost. “The West is some of the most fun I’ve had on the golf course,” says Moore. “It’s super user friendly, and it's visually stunning.”

After a triple bogey on the South Course’s 16th hole, Arnold Palmer dubbed this hole a “monster.” As one of the longest par 5s on earth, the nickname stuck. Today, a plaque immortalizes the nickname on a bridge to the green. “It’s just a bear of a hole,” says Moore. “The fairway is 240-250 from the tee, so it’s seldom reachable, and water protects the green in the front.” That said, the sixth hole, a marathon 469-yard par 4, is often considered the toughest.