Amish Country
Maybe you’ve done Amish Country. You’ve stocked up on cheese and homemade pies and passed a horse-drawn buggy or two. But Troyer’s Amish Tours in Holmes County will take you behind the curtain to get a feel for what being Amish means. Owner Rich Troyer’s guided bus tours offer guests the chance to learn about the land, history and culture of the area’s Amish by meeting them and seeing their daily lives. Skipping common tourist traps, the tours visit working farms to discover the ins and outs of how the Amish work without modern amenities. Tours also stop along the way at Amish-owned shops that specialize in leather goods, basket-weaving or woodworking, providing the perfect opportunity to check off a few people on your gift-giving list. “[Visitors] are fascinated by the culture, but what are you doing to learn about it instead of just tapping on the glass?” says Troyer, whose parents both grew up Amish. 330-600-4948, troyersamishtours.com 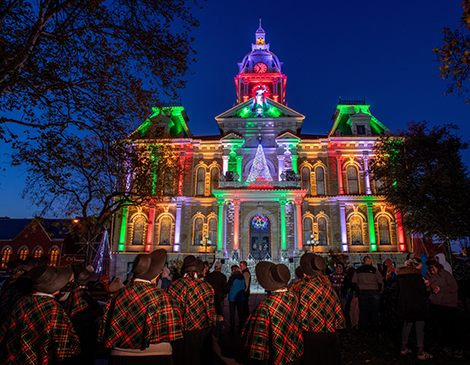 Dickens Victorian Village
Public art meets Tiny Tim in Cambridge every holiday season. Running Nov. 1 to Jan. 1, Dickens Victorian Village wows visitors with life-size scenes from Charles Dickens’ A Christmas Carol. Artist and retired men’s clothing shop owner Bob Ley came up with the novel idea 15 years ago along with his late wife Sue, a teacher and English major. There were 35 scenes that first year, and it’s grown to more than 92 scenes and 180 period-styled figures, including Ebenezer Scrooge, carolers and chimney sweeps. “They are life-sized, each one individually made by hand,” Ley says. “Many times we hear visitors say they feel transported back in time.” A 5:30 p.m. light show each night illuminates the nearby Guernsey County Courthouse, which is bathed in more than 65,000 lights and 60 animated displays, all computer-synchronized to holiday music. 647 Wheeling Ave., Cambridge, 740-421-4956, dickensvictorianvillage.com 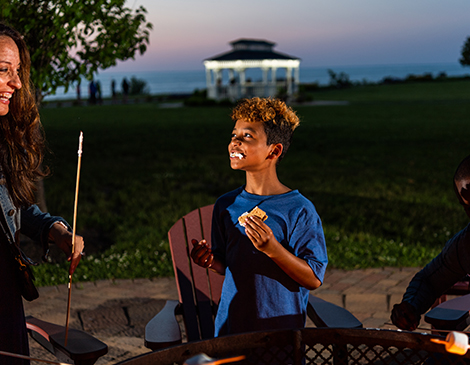 The Lodge at Geneva-on-the-Lake
Celebrate harvest time with a glass (or two or three) of some homegrown Northeast Ohio wines, and ditch the standard designated driver. Whether guests are staying at the lakeside resort or not, the lodge’s wine shuttle offers daily departures with stops at three ($35) or four ($45) wineries such as Grand River Cellars and Debonne Vineyards, with plenty of time to enjoy a glass of wine at each stop (price of wine not included). Weekend visitors should opt for the Signature Immersion Tour ($75 includes tastings and more), led by Lauren Fiala, the lodge’s wine education specialist. “We talk about the winemaking process, barrel-aging,” she says. “They get to see behind the scenes. Not many people get to taste from the tank or barrel directly. I work with a great bunch of winemakers who trust me to go into their cellar and tell their story.” 4888 N. Broadway, Geneva-on-the-Lake, 866-806-8066, thelodgeatgeneva.com 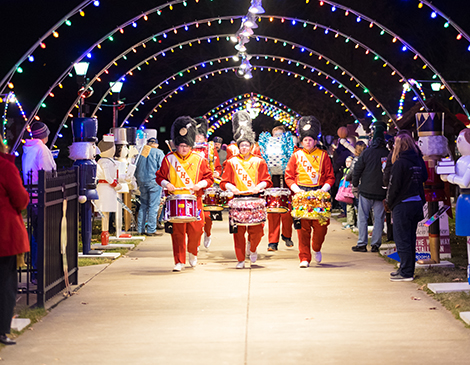 Steubenville Nutcracker Village & Advent Market
Like the larger-than-life nutcrackers themselves, the inspiration for this display, which runs Nov. 24-Jan. 9, started out fairly small in 2015. Therese Nelson and her father, Mark, who own Nelsons Gifts, were brainstorming ways to revitalize the town’s holiday celebrations. They decided to make a couple big nutcrackers as photo ops. Now, there are nearly 200, including a 3-foot-tall Hermey the Dentist from Rudolph and a 9-foot-tall Mouse King from The Nutcracker. Among the nutcrackers on Main Street, an open-air advent market features artisans and vendors located in Swiss-style wooden chalets, also handcrafted by the Nelsons. “We started it as a gift to the community,” Therese says. “The whole purpose of it was to bridge the gap between different groups in Steubenville as we unite everyone for a portion of the year.” 120 S. Third St., Steubenville, 740-283-1787, steubenvillenutcrackervillage.com

New flights out of Northeast Ohio cost less than $100 for select locations.

The lighthouse went into service in 1822, then at the edge of northwest Ohio's Great Black Swamp.

The Lakehouse Inn Is the Perfect Setting For Connecting

This Ashtabula wine country destination offers the perfect excuse for a self-care getaway with the gals in charming Geneva-on-the-Lake.