For Cleveland’s working musicians, the show must go on.

As the coronavirus pandemic forces local music venues such as the Beachland Ballroom, the Grog Shop and Nighttown to cancel shows or even shut down for the foreseeable future, those who rely on these gigs for income are also facing an uncertain future.

Some musicians have had as many as three shows canceled in a weekend, while older musicians or those with immune deficiencies have been forced to cancel their own gigs.

“These cancelations are absolutely devastating,” says singer-songwriter Michelle Gaw, a solo artist and member of the band Mimi Arden. “People don’t realize when they cancel a musician's gig without a good reason that they might not be able to pay their rent.”

Starting Sunday, Gaw is launching a new virtual concert series in an effort to help support local working musicians who are affected by shutdowns. The first show features Gaw, Matt Moody and Doug Nichols. The style of the show will be a songwriters in the round event, or an intimate concert style popularized in Nashville where musicians share the songs they’ve written and discuss their influence and inspiration.

After the show, which will last about an hour, virtual attendees can turn on their microphones and cameras for “virtual mingling,” says Gaw. Fans can also buy merch or music from the artists websites.

“I didn’t want it to feel like a normal YouTube video,” she says. “The situation that venues and musicians are in is just breaking my heart, and I wanted to find a way to help because I know that the Cleveland music community and the Cleveland community in general cares about the arts and about music.” 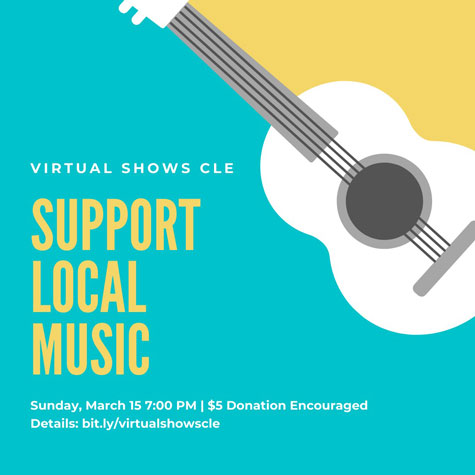 Gaw was inspired to launch the show after a private party she was supposed to play at was canceled. Facing financial uncertainty, she leaned on supportive family members. But she also understood that many others don’t have that support system. That’s why the shows are specifically geared toward raising money for working musicians, and not just showcasing local bands or acts.

The virtual show will be held on Zoom Cloud Meetings, which can host 100 fans. The suggested donation is $5. Email michellegawmusicbooking@gmail.com for access and donation information or go to bit.ly/virtualshowscle.

“We’re all fortunate enough to work doing what we love, but when you’re playing music for a living, the biggest risk is uncertainty.” she says. “It’s funny though. When I started this it was about the money, but now it’s become a way to bring people together without being together, and just make them laugh and be a morale booster.”
Share this story:

Here’s Where To Catch Live Music In Cleveland

Local music venues are starting to open back up with restrictions and guidelines in place.

By connecting DIY artists with institutions such as Brite Winter and the Tri-C Jazz Festival, the online concert series is helping the music scene make the digital leap.

New releases from Cleveland artists such as Mourning [A] BLKstar, Emily Keener and Uptight Sugar soundtrack our work from home and weekend days.