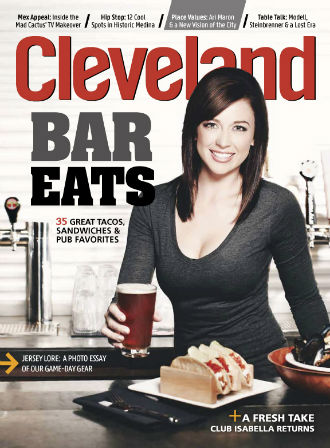 Chef Fabio Mota changes the tune of Club Isabella to put the focus on experimental fare.

They're sweet endings you love, but with a little something added in.

You're hungry and maybe a few drinks deep. Here's where to head (in a cab) for a snack.

Master of the Menu

These soups let you put back some favorite local brews with a spoon and a slurp.

They're on nearly every bar menu, but not all wings are created equal.

If vino is the specialty, count on classed-up versions of the bar food you love most.

Corvette for a Cause

We are all brown and orange. But when we don our game-day jerseys, the names and numbers reveal an odd collection of heroes and zeroes.

In the Neighborhood: Downtown Medina

Restaurant: Impossible host Robert Irvine talks about why his makeover of the Mad Cactus was one of the toughest challenges he's faced yet.

As the National Cleveland-Style Polka Hall of Fame readies for its Nov. 26 awards ceremony, organizer Tony Petkovsek talks about our city's second most famous musical export.

Ari Maron masterminded East Fourth Street's atmosphere and assembled its dream team of shop owners and top chefs. Now he's bringing his ideas about making cities exciting to Ohio City and University Circle. His goal is nothing less than to change Cleveland's destiny.

While the decision to move isn't easy, many seniors find an improved lifestyle in today's independent living communities.