Clevelanders are tough. So tough that our favorite music festival is outdoors, smack-dab in the middle of winter. But we’re also creative. So while others would cower in fear of the cold, we embrace it by packing the West Bank of the Flats for Brite Winter, the 11th annual celebration of regional music and art. The free ticketed event, 3 p.m.-1 a.m. on Feb. 22, features more than 40 bands on five different stages as well as immersive art exhibits, food trucks and more. “There’s so many festivals, but Brite Winter does something special by bringing regional acts to the stage,” says singer-songwriter Emily Keener. We talked to five bands we’re most excited to see about what fans can expect from their Brite Winter performance. 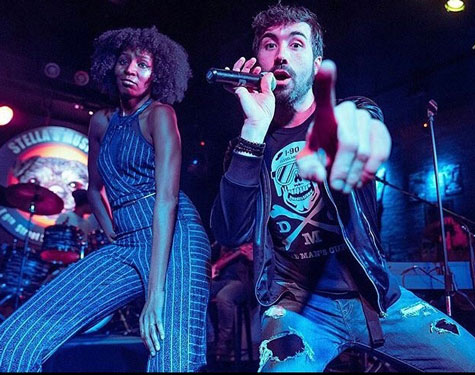 Apostle Jones
Sounds Like: The soul rock and blues of Alabama Shakes, Charles Bradley and The Marcus King Band
Behind The Music: This band burst onto the scene in 2018 with two goals: play as many live shows as possible and make the crowds, big or small, get up and boogie. Since then, the Northeast Ohio road dogs have perfected their alternative R&B soul song by amassing a resume of nearly 100 live shows, including Taste of Tremont, Larchmere Porchfest, Twinsburg Blues Fest and Burning River Festival. A rotating lineup of guitarists from the Apostle Jones family tree has helped make this possible, but lead and main guitarist Matt Moody, whose solo act is also playing Brite Winter, lays down everything from delicate jazz chords to muscular alt-rock hooks to rockin' blues riffage. He dances and weaves within the groovy pocket created by drummer Logan Maddock and bassist Todd Marshall. Singer and keyboard player Mikey Silas’ theater background shines as he delivers thundering vocal passages, acrobatic yelps and soulful sermons over top. Meanwhile, dancer and tambourine player Jessica Kennan might literally come into the crowd and drag you out of your seat if you’re not dancing with her. It all adds up to an explosion of soul, R&B and rock and roll with the power to move you and groove you. “The goal is to do music that pulls from all of the different influences that have shaped our perspectives of why music feels good, why it’s fun, why it’s cathartic and uplifting,” says Silas. “[We use] music as a tool to save, to turn the negatives into positives and to really spread that message of gratitude, love, peace and soul.
Stream: The powerful blues rocker “Make It Rain” often kicks off an Apostle Jones set.
When You Can See Them: 4:50 p.m. on the Cover My Meds Stage 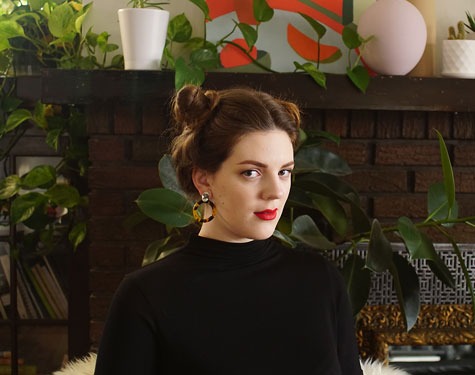 Emily Keener
Sounds Like: The moody, indie-folk of Bon Iver, Amanda Shires or Sharon Van Ettan
Behind The Music: A lot has changed since a 16-year-old Emily Keener blew Clevelanders and the nation away with renditions of Joni Mitchell and Elton John songs on The Voice. The now-21-year-old has stepped out of the spotlight, making this live appearance a treat, and taken control of her sound by acting as producer on her upcoming album of original tunes, I Do Not Have To Be Good. Slated for a May 22 release, the coming of age album, in both lyrical themes and actuality, explores heartbreak and vulnerability. “The album is an exploration in becoming my own person,” the singer-songwriter says. “I feel like it’s my musical rebirth, as I’m really taking control of my sound and shifting it in another direction.” Playing these new songs live with a full band, Keener hopes to foster an otherworldly, atmospheric experience at this year’s Brite Winter. “I try to create a space for people to get lost in the music,” she says. “I try to create a really immersive experience, where lyrics are hitting you and the tones are ethereal, up-lifting and making you feel connected to the other people in that space.”
Stream: “Do You Love Me Lately,” a relatable story song that epitomizes her new space-y folk sound and will make you wistfully stare out a window and think of an old lover.
When You Can See Her: 3 p.m. on the McCarthy's Stage 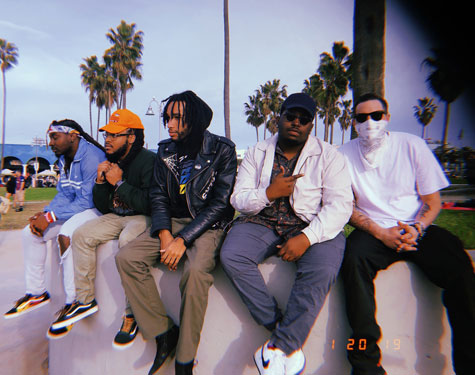 Red Rose Panic
Sounds Like: N.E.R.D-era Pharrell Williams and the Roots
Behind The Music: Formed in 2013, this dynamic instrumental-based hip-hop/rap act has something for everyone — and something most people have never heard anything like. With nods to Kendrick Lamar, the Roots, Rage Against the Machine and Pharrell Williams’ N.E.R.D, the first thing you notice is the unique jazz, metal and rock ‘n’ roll influences of Styxx on lead guitar, Reo Dinero on drums, Smokeface on bass guitar and Lou on Keyboard. But quickly, lead vocalist Luminari drops an acrobatic line like those found on “Change Your Mind” or “Heart Left” and you realize, Oh, this guy’s got something to say.“Red Rose Panic is a symbolism of your 24 hours you get every day,” he says. “We have our 9-5 jobs, but this is our resistance to fight back and be creative, so I’m really just talking about sensationalized versions of relationships, celebrations of life and the trials and tribulations that come with it.” Luminari, who started rapping over pre-recorded tracks and MP3s, has connected with the energy of his live band, which formed in 2013. Since then, the band has played Brite Winter in 2019, at Machine Gun Kelly’s EST Fest and had its Cleveland Cavaliers-themed song “Defend The Land” become an unofficial NBA Finals tune in 2017, when it was played on ESPN. “Hitting play on the MP3 is like a microwaveable sound, but there’s nothing like the home-cooked meal of what we’re doing with live instruments,” says Luminari. “We call our genre dynamic hip-hop because we have the ability to change, be unique, be emotion-drive and let it happen in the now.”
Stream: The spacey “Change Your Mind” shows off Luminari’s lyrical ability and singing chops, and features a fuzzed-out guitar solo fans of Pink Floyd will appreciate.
When You Can See Them: 9:20 p.m. on the The Adcom Stage Under The Bridge 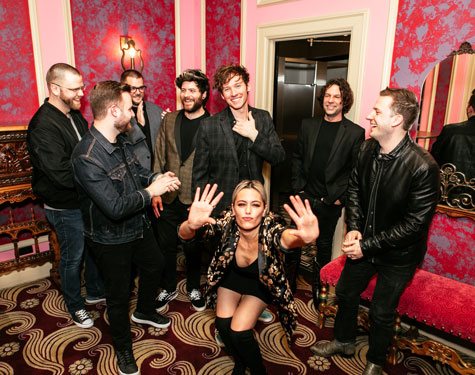 The Vindys
Sounds Like: Sultry modern jazz singing, a la Amy Winehouse, over Led Zeppelin with horns.
Behind The Music: The Vindys have officially taken Northeast Ohio by storm. Music Box Supper Club. They sold it out. Canton Palace. More than 500 tickets sold as the headliners. Their 2019 single “Are You Ready” played on the Pittsburgh Pirates’ AT&T Sports Network. But that doesn’t mean this well-oiled machine won’t have a little fun and get a little unpredictable. “The Vindys’ best selves are in front of people,” says powerful singer Jackie Popovec. “It’s like a switch for all of us. We love to play for people and get reactions out of people by throwing a little drama or improvisation in there.” The former cover band-turned jazz-blues rock sensation still busts out a few covers, including a monstrous version of Zeppelin's “The Ocean,” where Popovec proves to be one of the few vocalists that can give Robert Plant a run for his money. But with a batch of new songs set for a summer release, a new drum machine that can recreate some studio sounds and the full “family band” that includes a horn section, these Brite Winter veterans are sure to give longtime fans of classics like “Bang” or “Red Wine” a taste of something new.
Stream: “Are You Ready” is the perfect pre-game rocker to get you ready for the festival.
When You Can See Them: 8:50 p.m. on the Cover My Meds Stage 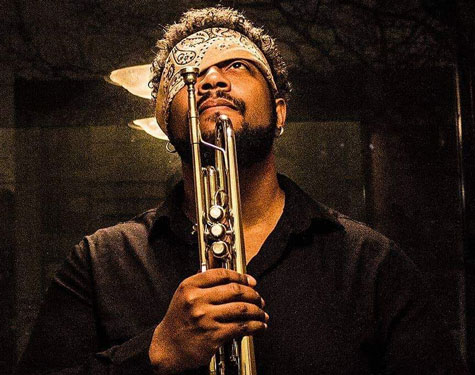 Wave Magnetik
Sounds Like: Jazz-electronic/hip-hop fusions such as Donnie Trumpet & The Social Experiment’s Surf or electronic duo Big Gigantic.
Behind The Music: This is your grandpa’s EDM band — if your grandpa is a jazz head. Like Kendrick Lamar did for hip-hop fans on his To Pimp A Butterfly album, Donald Malloy, aka Wave Magnetik, is introducing an audience of EDM ravers to jazz trumpet by expertly blending the sounds into a unified soundscape. “My goal at the show is to make people dance,” says Malloy. “But you don’t get cats soloing some deep jazz trumpet over DJ stuff, so I’m also hoping to open up minds to the realm of that stuff.” The project started in 2013, when Malloy discovered YouTube, where people were mixing modern beats with classical jazz. The Cleveland-native started making his own videos, building hip-hop/electronic-inspired background tracks and overlaying his lyrical trumpet playing. Since 2013, he’s also incorporated some singing and has since been taking his act to festivals and clubs in Detroit, Buffalo, Cleveland and New York City, where he lives. “I love jazz, but the experience is sitting there and just watching it,” he says. “This is like, ‘C’mon girl, let’s dance.’”
Stream: “Brass Love,” an ode to all brass instruments where he plays trumpet, tuba and trombone. In the YouTube video, Malloy shows how he builds the song from keyboard to drum machine to trumpet.
When You Can See Him: Midnight on the McCarthy's Stage