Shawnda Moye looks back on the past year with awe.

“2020 was learning the art of the pivot,” says the owner of The Roaming Biscuit, a breakfast sandwich pop-up.

When the pandemic began, Moye had to reconfigure her business model on the fly. Accustomed to working out of various locations across the city, she soon settled into a more permanent schedule with Six Shooter Coffee in Collinwood. Now, Moye calls Six Shooter home five days a week while managing a variety of simultaneous pop-ups across the city.

Without her own kitchen to work in, Moye relies on host restaurants — but the loyal following she’s built on social media ensures that her hosts are all but guaranteed to see returns.

“When I reach out to a business to do a collab, I say, ‘It’s a proven fact, I’m going to bring customers to you,’ ” she says, confidently. “It’s a win-win for both of us.”

Mahall’s 20 Lanes in Lakewood has been banking on the buzz that its pop-ups provide. Typically a live music venue, Mahall’s has morphed into one of the city’s key pop-up partners throughout the pandemic, working with The Roaming Biscuit and others. 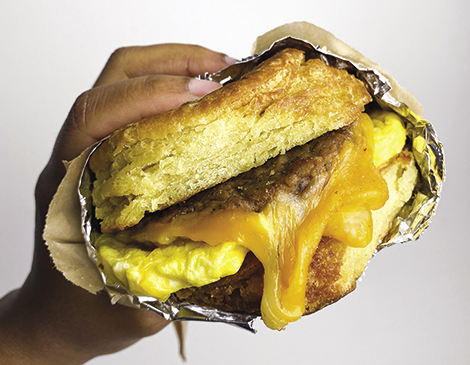 “We’ve had great turnouts to our events and feel very connected with our customers,” says Cierra Shaffer, co-owner of Parky’s. “We’d love to keep that going and eventually open a space of our own to let other aspiring chefs work out of.”

Madison Pierce, owner of Burial Grounds Vegan Bakery, says being able to use another restaurant’s kitchen allowed her to get her business off the ground. For four months, she operated as a semipermanent entity within Rood Food & Pie in Lakewood, her desserts appearing on its main menu but under her company’s name.

“Being welcomed with open arms into such a nice kitchen was significantly more affordable than renting a commercial kitchen,” says Pierce, who has since moved to a home-based business in Akron. The following she built while partnering with Rood Food allowed her the stability to strike out on her own.

After a year of selling at farmers markets and breweries, even Autumn Johnston, perhaps better known as The Pierogi Lady for the last 10 years, says she has faith in the future of pop-ups.

“I think 2021 is a banner year,” she says. “People appreciate pop-ups and the events they didn’t get to do last year even more.”