Ghost kitchens have long been popular in bigger cities like New York, Los Angeles and Chicago, but only recently have they really made their mark in Cleveland. More permanent than pop-ups, ghost kitchens allow chefs to utilize the kitchen of an existing restaurant to operate stand-alone concepts — typically with takeout- and delivery-only menus.

“[In Cleveland], if there’s no COVID, there’s no ghost kitchens,” says Tom McIntyre, owner of Kate’s Fish at the West Side Market. “There were a lot of concepts in talented chefs’ minds that they’d never been able to bring to the light of day.”

Creative individuals like McIntyre and others banded together to set up shop within restaurants that had closed or were seeing less business than usual. McIntyre partnered with chef Brett Sawyer to launch Kate’s Good Fish Co. in January out of the temporarily defunct Good Company in Gordon Square, with a fast-casual seafood menu that sold out in its first weekend. 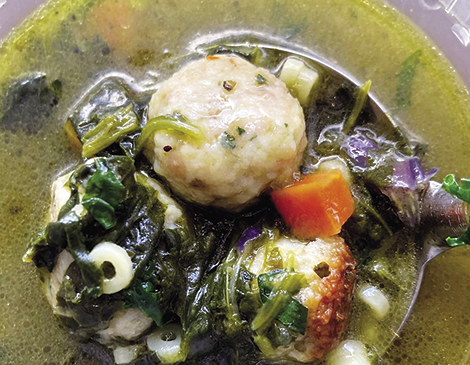 In Moreland Hills, David Chin operates Mr. Chin’s Ramen out of Flour, where he’s chef de cuisine. In Tremont, Bar Oni’s David Kocab and Matthew Spinner serve Italian comfort food at Conforti, using the kitchen at Freddie’s sandwich shop next door. And in Kent, the owners of Wild Goats Cafe started operating Front Door Burger right out of their own kitchen as a means of branching out. These collaborative efforts garnered enough excitement and brought in ample customers to keep their host restaurants in business.

Even chef Douglas Katz joined in on the local haunt trend: when his catering commissary sat empty amid the pandemic, he seized the chance to try entirely new ideas he had brewing for a while: Chimi, a South American concept, and Amba, which serves Indian-style food.

“We were lucky to have opportunities to start working on new concepts during a time when there wasn’t so much going on,” says Katz.

And Detroit-style pizzeria Good Meal Jane, which started as a two-week ghost kitchen out of UnBar Cafe on Larchmere, has already moved into a more permanent home at the Sauce the City Food Hall in Ohio City.

“The pop-up forced the hand of the brick-and-mortar,” says Good Meal Jane’s chef Will Lewis.

McIntyre is also working on finding a long-term home for Kate’s Good Fish Co. — and while there’s no telling whether the ghost kitchen trend will last — he thinks the popularity of ghost kitchens has changed the local dining scene for good.

“Fine dining isn’t dead, but it will be different,” McIntyre says. “People are attracted to casual concepts in more fun and temporary environments.”

Jarrett Mines Eager To Leave His Mark With Cleveland's Filter
With the opening of his new Warehouse District restaurant, the former personal chef is ready to wow the city with his interactive dishes. Read More >>