When stepping into this model home inside Walden, a residential community in Aurora, everything clicks together. The open design creates a breathable and bright environment, a philosophy set forth by Walden’s founder, Manny Barenholtz, that balances luxurious touches while coexisting with nature.

“If the layout needs to be a certain way to maximize the privacy of trees or the views of nature, he really wants to take advantage of that,” says Michael Yoe, who works in business development at Payne & Payne Builders. The company will start building custom homes early next year inside Walden, with each one taking on distinct and unique characteristics. For example, this bedroom boasts large casement windows that lead into a patio area. “It was important to bring in those views, even to the master bedroom, where typically a lot of people keep it a little bit more private,” he says.

The use of large casement windows is a common feature in a Walden home — a design move that allows homeowners to see the beautiful surroundings outside. Based on Barenholtz’s design approach, this model home feels open and wide-reaching, as each space blends into each other seamlessly. “It’s that compression and release theory that Frank Lloyd Wright uses where basically you have these grand big open spaces in a home,” says Yoe. “And then between these big spaces, you have some narrower sections of hallways, so that you go through these hallways and then it opens up into these grand spaces.” 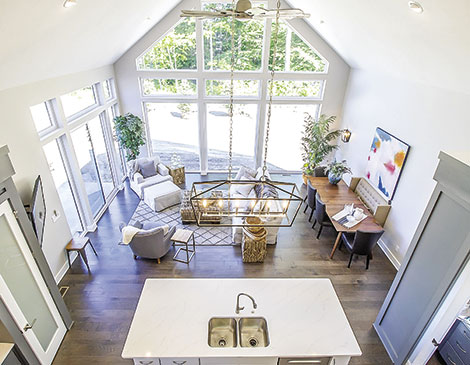 Living Area
Due to the open design the home creates, the first floor serves as a couple of rooms in one, including the great room, dining area and part of the kitchen. But what makes the rooms feel so inviting is the strategically placed floor-to-ceiling windows that bring in natural light. “There’s a lot of very big windows to kind of seamlessly bring the inside of the house to nature and bring those views in,” says Yoe. “[Barenholtz] told me a couple of times: If there isn’t something beautiful to look at outside then just simply don’t put a window there.” 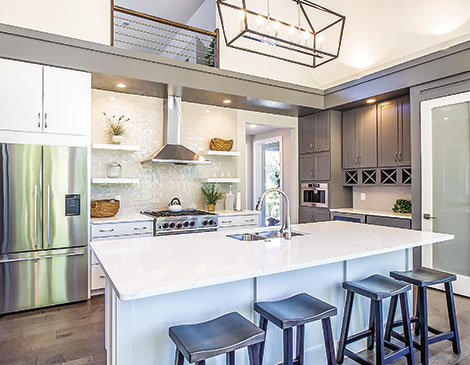 Kitchen
Driven by the contemporary design of the home, the kitchen features plenty of cabinet space, along with additional areas for cooking and sitting down. A large island allows for plenty of seating. “The kitchen island almost acts as a barrier for where the kitchen area is designated,” says Yoe. “But with it being custom, sometimes not everybody wants that much openness, so we do have the ability to do formal dining rooms if somebody wants to have a space like that.” 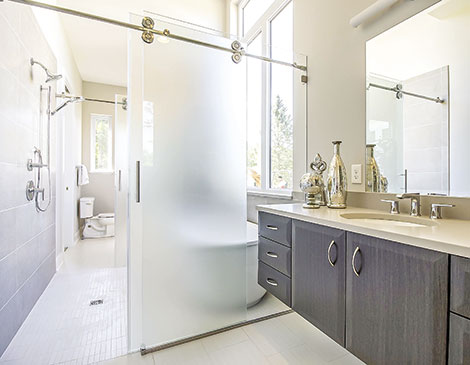 Bathroom
Similar to the rest of the house, the master bathroom’s layout is also constructed in a way that flows with the theme of the home. “That concept of openness is carried into the master bath as well,” Yoe says. While most homes might have a shower inside the tub, this bath has an all-in-one wet room, which includes a stand-alone porcelain tub inside the tiled area of the shower. It’s enclosed with clear, glass barn sliding doors for extra privacy.

How To Keep Your Gutters Clean

Rick Winrod from Rolling Thunder Window Cleaning and Power Washing gives us some tips on how to make sure we're on top of this household chore.

How To Decorate Your Christmas Tree This Year

Lifestyle blogger Samantha Curtis has all the tips, trends, decorations for your ultimate showstopper this season. Plus, Sugar Pines Farms co-owner Jane Neubauer shares some tips for picking the best tree.

Architectural Justice Makes A Bold Statement In This Spacious Kitchen

The company's interior designer Merrie Guinther was inspired by the homeowner's collection of artwork and used one piece to infuse color into the space.