It’s the first day of school at Hawken, and as Maddy Eippert walks into her AP Statistics class, her teacher announces, “Please arrange the tables however you want.”

Eippert and her 16 classmates don’t do much reconfiguring — the class before them had created two rows of tables facing each other, and their peers were pleased with that setup.

This level of flexibility might sound strange to anyone who grew up sitting in chairs affixed to desks, lining up in straight rows facing the teacher at the front of the classroom.

But it isn’t all that notable to the 17-year-old senior. “It’s just what we’re used to,” says Eippert, whose entire high school life has been at Hawken’s upper school building in Gates Mills, which was completed in 2016.

She’s always had access to classrooms that can be reconfigured at a moment’s notice.

Hawken is one of many schools in Northeast Ohio and around the country that are moving toward flexible classroom seating, which can mean a variety of things depending on the school and grade level, including lack of assigned desks, tables that can be quickly rearranged, alternate chair choices — wobble chairs, wiggle discs or balance balls — or rugs and low tables that encourage students to sit on the floor.

Erin Mandalfino, Children’s House director for Ruffing Montessori School in Cleveland Heights, says she hopes flexible classroom seating is a movement that’s here to stay. In fact, Montessori educators have been doing things this way for more than a hundred years.

“It’s a principle in Montessori education that children have the freedom to move,” she says, “because children learn best by moving and being given a choice, and it fosters their ability to work collaboratively.”

Though data tying flexible seating directly to student achievement is difficult to come by, educators who have implemented it say the benefits are many, including student empowerment, physical comfort and collaboration.

Elementary-aged Benefits
Sarah Bobko is both a teacher and parent at St. Angela Merici School in Fairview Park. She’s excited for her daughter, Ruby, this school year because the 7-year-old has been assigned to a second-grade classroom with flexible seating. There’s a couch and counter-height tables with stools evoking a calming, coffee-shop feel.

“It’s really good for Ruby because she’s a more outside-of-the-box learner,” Bobko says. “She has a lot of movement to her, so it will give her an opportunity to not be stuck in a desk all the time and focus better.”

Bobko is a third-grade teacher with her own flexible seating classroom. She was inspired to move in this direction six years ago after reading blogs of other teachers around the country who successfully converted their rooms to spaces with flexible seating.

She eased into it at first by keeping a desk for every child, while providing a table with different seating types at the back of the room that students could choose during independent work.

It went well, and two years later Bobko fully transitioned her classroom to flexible seating, removing all but a few desks for kids who prefer their own designated space.

“Every year I have at least one kid who tells me they need to have their own space, and they feel more comfortable with a desk and chair,” she says. “That’s the point of having flexible seating — to figure out how you are the most comfortable.”

Now her room is stocked with beanbag chairs, doughnut cushions, balance balls, scoop-shaped rocking chairs, a standing table and low tables for floor seating, among other options. All students have a cubby with a canvas bin to store their supplies.

At the end of each day, they choose where they’d like to sit the following day on the classroom’s flexible seating chart.

“There is a possibility they won’t get first choice,” Bobko says. “But there are so many options, there are always other places they can go and enjoy.”

The benefits of flexible seating, educators say, depend on each child and what he or she needs.

“It’s good to give them ownership and responsibility for choosing their best learning environment,” Bobko says. “And some kids just need to move their bodies.”

Theresa Frisbie agrees. The lower school director at Andrews Osborne Academy in Willoughby says her school’s third, fourth and fifth grade rooms have seating alternatives, like wobble chairs and balance balls, as does the Spanish classroom. They’ve been in place for about four years.

“There’s a lot of research out there that says movement is good for kids, and these chairs provide movement,” she says, adding that the backless options also improve kids’ posture. “It’s strengthening and energizing at the same time.”

But do students today need to move more than students of previous generations?

“I don’t think they need it more, but I think they get it less,” Frisbie says. “With all the use of electronics, kids need movement, but they’re not getting it enough.”

In any case, the students at Andrews Osborne Academy get to choose whether or not they’d like to use these options or sit in a regular chair.

“We really believe in differentiation — tailoring what you do to meet each child’s need,” she says.

At Ruffing Montessori School, you’ll find balance balls, wobble chairs and cushions, as well, but you’re just as likely to find students on the floor, Mandalfino says. Her students’ work space is either on a throw rug, at a table or at a chowki, which is a low table used while sitting on the floor. There are no individual desks. Tables are round because they invite group work, which, she says, is a child’s natural inclination. 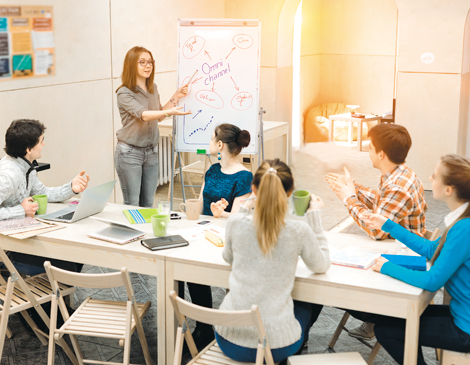 A Seat at the Table
Collaboration is key for older students, too.

When Rick Tate, a self-described introvert, reflects on high school several decades ago, he questions how comfortable he would have been with the flexible classrooms in place today at Hawken, where he is assistant director for teaching and learning at the upper school.

“There are students who like to hide a little bit,” he says. “It’s more comfortable to just be assigned a desk, but this approach is designed to help students collaborate regardless of where they’re starting from.”

Every classroom at Hawken looks different, Tate says. They all have chairs that can be stacked and tables on wheels that can be folded or moved easily. Instruction sometimes takes place in non-classroom spaces, like near a gas fireplace.

Often, teachers opt to set up the classroom in a U-shape, Eippert says.

“It makes it a lot easier to have a class discussion when you’re facing the people you’re talking to instead of the people behind you,” she says. “It’s more inclusive.”

Tate points out that the main goal of school is to prepare students for their future work environments — very few of which look like traditional classrooms.

“That’s why things here feel more like [what] one would find in a conference room or boardroom,” he says.

“We take full advantage of it,” Morrison says. “There are a lot of things that would be difficult to do if we didn’t have this space.”

The Exploratorium features foldable tables on wheels, stackable chairs, two projectors with screens, two whiteboards, 20 laptops and foldable walls that can partition the space or keep it open.

Morrison uses the room in different ways based on the lesson of the day. For example, a walkthrough of CAD software requires students on laptops sitting at tables facing the projector screen. Another day, students may be working in small groups or gathering around materials in the center of the room.

“Some kids don’t do well with structure all the time,” Morrison says. “The ability to have a more organically arranged classroom gives their brains a break and feels more intimate. Having a more intimate classroom allows the students to use me as a resource as opposed to feeling like I’m an authoritarian figure.”

Flexible classrooms have played a role in the paradigm shift between teacher/student relationships, some educators say.  It’s no longer a top-down approach, and it’s not going back anytime soon — especially for schools like Hawken and Lake Ridge that have been constructed with flexibility in mind.

“There won’t be a time, I can imagine, where we’ll go back to 20th-century desks tied to chairs,” Tate says. “It’s not just the teacher from whom we’re learning anymore. Everyone is part of the learning community in some way.”
Share this story:

Cleveland Schools are Struggling to Find Teachers, Janitors and More

We talked to leaders from Lorain, Western Reserve, Parma and more about how they're combatting the problem.