Whether it’s just a few hours a day for a week or overnight miles and miles away from home, camp can be a wilderness of worries for parents. So we asked experienced camp counselors to offer some advice and peace of mind before your kid goes to camp.

They are going to be OK. Parent check-in day at Camp Burton is always an emotion-filled time for families, says Carter Shope, 19, a program director who oversees the staff of counselors at the overnight camp in Geauga County. “It’s really hard for some parents to let go and watch their kids go for a full week of camp,” she says.

Walking a nervous child to his or her cabin can make the separation even more difficult. “We have them do something other than wait in the cabin for other campers to arrive,” she says. “It’s hard for parents to see.”

Counselors want parents to walk away with a visual that their kids will be OK, because they will be. So, Shope encourages campers to join some of the camp games or visit the pool. “That way, parents can walk away easier,” she says.

No one goes hungry. Whether you’ve got an especially picky eater, a child who deals with food allergies or both, camps take measures to ensure food is safe.

There are even options if your child really won’t touch what’s on his or her plate, says Shope, who has food allergies and got her start at Camp Burton working in the kitchen.

Parents often ask if they need to pack special foods for their child. But Shope says they need not worry. “I talk to parents of kids with food allergies and let them know their child will be fed and won’t have an allergic reaction,” she says.

If a camper just won’t touch what’s on the tray, Shope says, there are alternatives for the no-thank-you eaters. “We always say, ‘If you don’t like what’s offered, let your counselor know,’ ” she says. 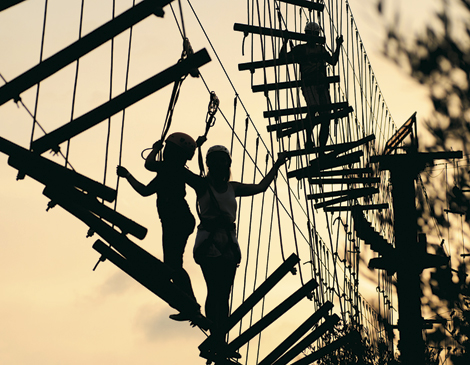 Little memories can be a big deal. Even a short stay at camp can create memories for a lifetime, says Emma Northeim, a counselor at Common Ground and a kindergarten teacher in Strongsville.

When one young camper realized he could get his shoes and socks wet, for example, he loved splashing in the river. “He was so worried about going into the river,” she says. “But eventually he was splashing and loving it. His jeans were wet. He couldn’t have cared less.”

There is safety in numbers. Compared to our normal, structured lives during the school year, camp can seem so open and wild. “Kids are curious, and some parents are concerned and want to be sure their child will be safe,” Shope acknowledges.

She suggests asking about the camp’s policy for keeping watch over children. At Camp Burton, no camper is ever without another camper and counselor.

“At least three people are together at all times,” Shope says. “If we’re on the zip line and someone needs to go to the bathroom, we send another camper and counselor with that child.”

Your kid will adapt. The first two days of camp are the toughest, Shope says.

“Kids are getting used to their surroundings and being in a cabin with 13 other kids and a counselor,” she says. “They’re waking up at night and realizing mom is not there, but a counselor is.”

Counselors help make your child feel at home, Shope emphasizes. And after a couple of days, kids are into the camp routine and used to asking someone new for help. “Your counselor is there for you,” says Northeim. “You’ll make a connection with that person.”

“By the end of the week, some kids don’t want to go home,” Shope adds.

Making friends is easier than you think. With kids from a range of backgrounds coming together, camp can be the perfect petri dish for building lifelong bonds. In addition to all the new faces, camp activities often help promote teamwork and camaraderie. “Camp is a very friendly place,” Northeim says. “By the second or third day, they make friendships.”

Summer Camp Guide: Read This Before You Enroll

Four tips to help you whittle down choices and select the right camp for your kid.

Summer Camp Guide: Get Out and About

Summer vacation may be short, but camp season offers an entire landscape of opportunities for your kids.

3 Things Parents Can Do To Keep Kids Learning Independently

Gregg Good says setting an example as a parent is key to teaching them life skills.