It’s no secret that Cleveland is home to many successful small-business owners, entrepreneurs and side-hustlers. But what local author Maggie Sullivan wanted to achieve with her new book Boss Ladies of CLE, is to shine a light on successful women in Cleveland in their respected fields. Along with creating a resource for inspirational women, Sullivan was also motivated by the lack of representation across many industries and politics, such as the fact that the Ohio General Assembly is only 26% women or that the city of Cleveland has had only one female mayor.

“Right now just two out of 16 of Cleveland city council members are female,” Sullivan points out. “And one, Jasmine Santana, who is featured in the book, really had to fight to earn her spot.”

In addition to political leaders, Sullivan features the stories and photos of other success stories that she felt inspired by. The book, which took her a year to put together while she worked full time as a copywriter, features 20 women including fashion entrepreneurs such as Jackie Wachter of Fount Leather, as well as artists such as Malaz Elgemiabby, or Melody Stewart, the first African American woman to be elected to the Ohio Supreme Court. Sullivan hopes that through these stories being collected in one space, it’ll address the certain gender disparities and serve as a source of advice for women who read it. 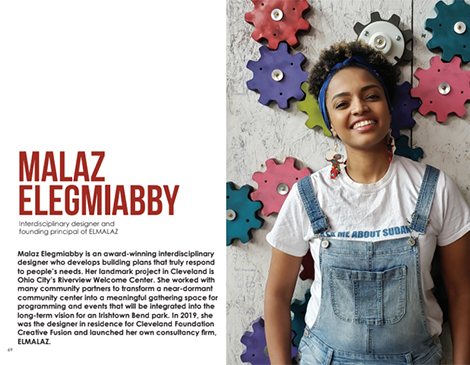 “This book lends more visibility to some of the women who are already doing incredible things in Cleveland, and provides other women that resource,” Sullivan says. “We’ll never see more women elected to office, starting their own businesses, or getting into the top of their field, whatever that may be, without sharing the stories of the women who are currently doing those things.”

We caught up with Sullivan since the book released last week to learn more about the process behind the book.

Q: What moved you to put together a book like this?
A: The reason I wrote it is because I wanted to read it. I was looking for a good book to read and I love reading biographies about cool women and I really wanted to read something this time about somebody from here, Cleveland, rather than someone in some far-off place like New York, LA, DC or wherever. I realized there really aren’t many stories about here for local women and the more I thought about that, the more I thought how much we needed a resource. Because women are underrepresented at every level, almost every industry in Cleveland and of course, that’s far worse for women of color. So I thought about how we’ll never see more women in positions of power without increasing the visibility in the stories of those women who have already tapped into it.

Q: What was the process behind choosing the women that would be featured in the book?
A: It was difficult because I wanted to include so many people, but you know, if I included 100, it would just never get done. So I thought 20 was an OK number to start with. And most of the people who are in the book are people who I had admired from afar already. But part of the process was that I wanted to include insight on as many different industries as possible. So we ended up with 20 women who are entrepreneurs, artists, activists, elected officials and STEM workers ranging in the 23 to 64 [age range]. All of them come from different neighborhoods, all have their own reasons for pursuing careers in Cleveland. Some have advanced degrees, some started working right out of high school. I really wanted to provide a range of career paths.

Q: What is the format of the book?
A: It’s kind of like a Q&A or like an “as told to.” We had face-to-face interviews and then, you know, the transcriptions were edited down significantly because we had pretty long conversations. I actually was originally going to write full profiles from a third person perspective, but once I transcribed the first few interviews, I just thought it was so much more powerful to hear the stories coming straight from the women.

Q. What made you want to include photos in the book as well?
A. I wanted the book to be more than just a book. I wanted it to be a work of art that you could flip through and really be inspired by. Whenever you feel like you need to pick me up you can even look at it and feel energized and inspired because we also have these huge pull quotes. I reached out to a previous colleague of mine, who’s a graphic designer. Her name is Monica Farag and we collaborated on the design of this book. So that’s why it looks as beautiful as it does on the inside. And she designed the cover, too.

Q: Who was this book written for?
A: It’s for dreamers. It’s inspirational and aspirational. For people who might still be looking to find their way in this world and gain clarity about what they want to do in their life and how to do that.