Once upon a time in a land close to home, there were workplaces and living spaces of famous authors and illustrators that literary fans could explore through printed maps created by the Ohioana Library Association. After more than 50 years, the organization, which collects, preserves and celebrates Ohio literature, has now gone digital with the Ohio Literary Trail, an online map that connects people to more than 60 notable sites around the state. “Literary tourism is becoming a much more popular thing because people love authors and books,” says Ohioana Library Association executive director David Weaver. “It’s exciting to go find an author you might like and actually visit where they lived, where they worked.” Take a page out of our book and check out these must-see spots.

Billy Ireland Cartoon Library & Museum
What started as a small collection of original work from Ohio State University alumnus Milton Caniff, famed for the Steve Canyon comic strips, quickly grew beyond that. This museum now houses the world’s largest collection of original comic strips, graphic novel artworks and cartoon sketches. “People are just fascinated with some of the early comic strips and the comic art, and to see how it’s all taken shape over the years,” says Betty Weibel, board member of both Ohioana Library Association and the Ohio History Connection.
Text Takeaway: Peruse through original sketches of Mort Walker’s Beetle Bailey, one of the oldest running cartoon strips in the country. 1813 N. High St., Columbus, 614-292-0538, cartoons.osu.edu

Grandma Gatewood Trail
Located in a beautiful section of Hocking Hills State Park that includes Cedar Falls and Old Man’s Cave, this 6-mile trail honors Emma Rowena Gatewood, the first woman to hike the more than 2,000-mile Appalachian Trail solo in 1955. At 67, Gatewood was an inspiration for essayists and journalists and has since been the subject of many films, songs and books. “If it doesn’t inspire us to pick up a National Geographic or appreciate the beauty of Ohio and all that we have, nothing will,” says Weibel.
Text Takeaway: Take a break from your hike while passing through the Old Man’s Cave area, a valley gorge notable for its black hand sandstone. Hocking Hills State Park, Logan, hockinghills.com 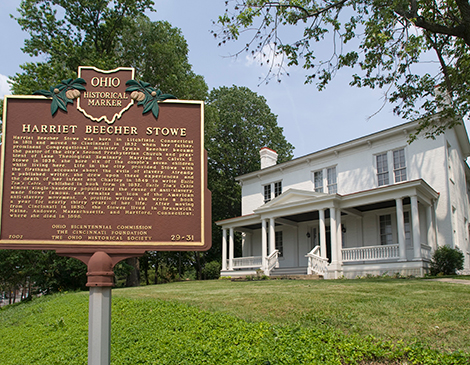 Harriet Beecher Stowe House While Harriet Beecher Stowe was not living in this house when she released her famed book Uncle Tom’s Cabin in 1852,
the 18 years spent here greatly informed her knowledge and understanding of the Underground Railroad and the abolitionist movement. You can wander through the house and see historic artifacts from the 19th century or explore exhibits on Stowe’s literature and women’s right to vote. “You can really see the genesis of the issues that we’re having today,” Weaver says.
Text Takeaway: Round out your trip by purchasing a copy of Uncle Tom’s Cabin, the antislavery novel that sparked longstanding change. Open by appointment only, 2950 Gilbert Ave., Cincinnati, 513-751-0651, stowehousecincy.org 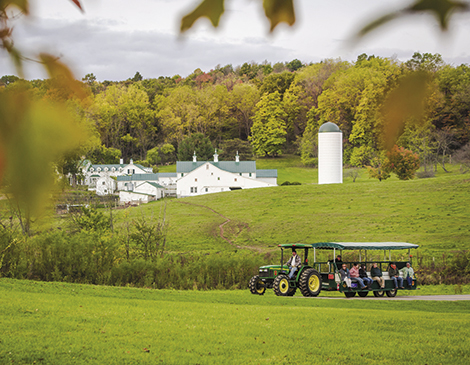 Malabar Farm
Malabar Farm is the former home of Louis Bromfield, a famed fiction writer of the 1920s who became one of the world’s leading soil conservationists in the 1930s. As the only state park in Ohio that’s still a working farm, there are nearly 1,000 acres to explore. Head into the Big House to see a vast collection of Bromfield’s works or the Education Visitor Center that outlines his career as a writer and journalist. “It’s a very fascinating place to combine literature and farming and nature,” Weaver says.
Text Takeaway: Walk in the footsteps of Humphrey Bogart — one of the greatest classic movie stars and an old friend of Bromfield’s — at the Big House where he and Lauren Bacall famously tied the knot. 4050 Bromfield Road, Lucas, 419-892-2784, malabarfarm.org

Mazza Museum
Follow your inner child to Findlay’s Mazza Museum, where you’ll find more than 15,800 original pieces of art inside the largest collection of artwork by children’s book illustrators such as Eric Carle, creator of The Very Hungry Caterpillar. After admiring nostalgic classics, check out the Laiho Gallery to get an insider’s look into the construction process behind pop-up books. “Children’s picture book art is a very unique entity itself,” says Weaver.
Text Takeaway: When open, you can pick up a copy of The Little Engine That Could, illustrated by Ohioan Lois Lenski, which celebrates its 90th anniversary this year. Open by appointment only, 201 College St., Findlay, 419-434-4560, mazzamuseum.org

The Chef's Garden: A Modern Guide to Common and Unusual Vegetables is an encyclopedia, a recipe collection and a personal memoir in one visually stunning book.