Archived headlines can’t always encompass the character of a city such as Cleveland. Yet Cleveland 20/20: A Photographic Exploration of Cleveland aims to capture the vast diversity of lives and livelihoods of its citizens.

On display through spring 2021 at Cleveland Public Library’s Brett Hall, the exhibition is the culmination of a nine-monthlong project from 2019 in which more than 25 different photographers, organized by the Cleveland Print Room, aimed to capture the city in a new light as part of the library’s 150th anniversary celebration.

“We wanted there to be a gift that lasts for the next 150 years,” says Aaron Mason, director of community engagement at the Cleveland Public Library.

Although nearly 200 photographs have been chosen for this exhibition, it’s just a sample of the 1.3 million photographs that are part of the library’s permanent collection. Many of the collection’s photos are from newspaper articles or government documents dating as far back as the mid-1800s, but there’s never been an organized effort to capture Cleveland’s humanity through the eyes of everyday citizens.

“We focus on the fact that there’s a lot of poverty or that it’s a Rust Belt city. That’s a very narrow view of the city,” says Mason. “These photographers documented the other 90% of life that occurs every day.” 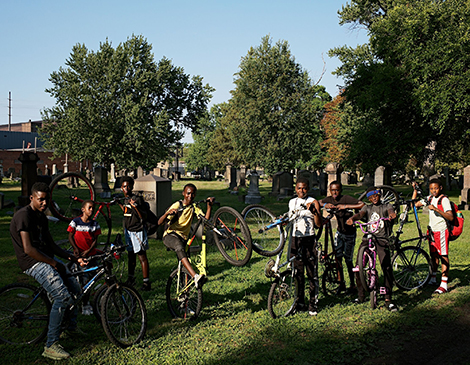 For Shari Wilkins, founder and strategic director of the Cleveland Print Room, the exhibit showcases an important place in time that documents life pre-2020.

“It’s a really interesting representation of the photographers catching Cleveland in 2019 before the shutdown,” she says. “I feel like it’s a valuable piece to have for their archives.”

Wilkins, who contributed seven of her own photos to the project, points to Ohio City House as an image that not only captures a house she’s been fond of for 20 years, but speaks to ongoing issues such as gentrification that’s occurred in Ohio City over time.

“Being in that neighborhood and seeing the gentrification, I thought it was a perfect time to take a photograph of that because it was in transition,” she says.

Others, such as Aja Grant’s Parade the Circle and Billy Delfs’ Feast Little Italy depict generations of Clevelanders as they participate in important cultural events throughout the city. Even captivating portraits such as Ruddy Roye’s Kids on Bicycles, which depicts young Black men posing with their bikes in a cemetery, seem to intersect with larger issues of race, social justice and boyhood.

“You can see people of different backgrounds, and different economic backgrounds,” Mason says. “That’s why I’m so fond of the exhibit. That diversity is captured in it.”