By now, The Land has quite a few striking murals in its inventory. Check your feed, and the Prince Doughnut or Love Doves, both in Ohio City, are now almost as quintessentially a part of our iconography as the Terminal Tower or the Guardians of Traffic. As you socially distance this summer, take a stroll past some of the region’s newest installments, all painted in about the last year. “Really, Cleveland has gotten serious about public art,” says Terran Washington, a visual designer and Ohio native who created a mural at Cleveland Hopkins International Airport. “Looking back even seven years ago, there was really nothing much there, just a few nice pieces. Now, I’m so glad it’s happening, and I’m glad to be part of this really cool art movement.”

Come Together (August 2019): Lisa Quine
House of Swing, South Euclid
Inspiration: The South Euclid slogan “Come Together and Thrive,” was the starting point for this mural on the side of the beloved jazz and blues club, but Quine shortened it as a nod to the Beatles and the location’s musical purpose. She completed the piece in the midst of her first trimester of pregnancy — and a heat wave.“I’ve found that bright colors and a positive message work really well because you think of the pedestrian or the driver driving by the mural, and I wanted something bold that would stop them in their tracks,” says Quine, a Mentor native now living in Dallas. 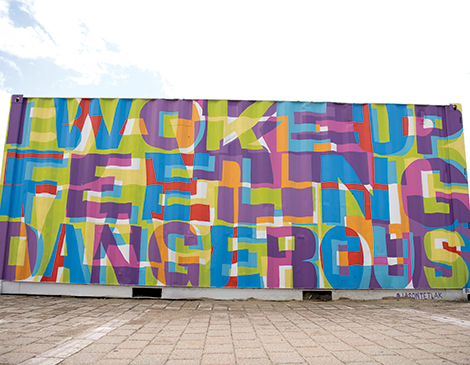 Untitled (April 2019): Jason Tetlak
Voinovich Park, Cleveland
Inspiration: Having lived in Florida for almost 20 years, Brunswick native Tetlak wanted to tap back into his hometown pride. He joined the hype surrounding the 2019 Browns roster by scrawling Baker Mayfield’s “I woke up feeling dangerous” boast in overlapping type for this optical illusion on the East Ninth Street Pier in Voinovich Park. “The way this mural’s painted is a technique called ‘red reveal,’ ” Tetlak says. “You look at it and it says, ‘I woke up feeling dangerous.’ If you look at it through a red lens, it changes to Baker Mayfield’s name.” 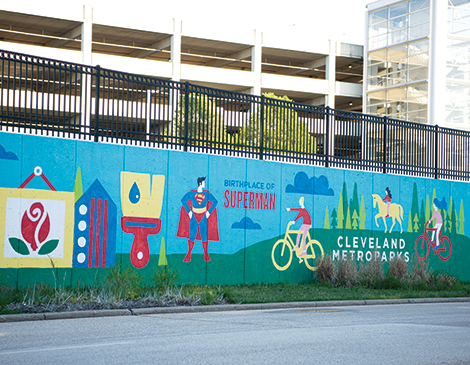 Untitled (September 2019): Terran Washington
Cleveland Hopkins International Airport, Cleveland
Inspiration: Commissioned by Destination Cleveland, this tableau facing the arrivals area was designed to welcome newcomers to the city, and took Washington about three months to complete. Approximately 100 yards long, the mural features an array of Cleveland legends from both life and myth, from the Lake Erie Monster to Severance Hall. “I’m a designer first, so I approach public art from that perspective,” says Washington, a Lima native and visual designer now based in Austin. “I wanted it to be really interesting, but still really simplistic.” 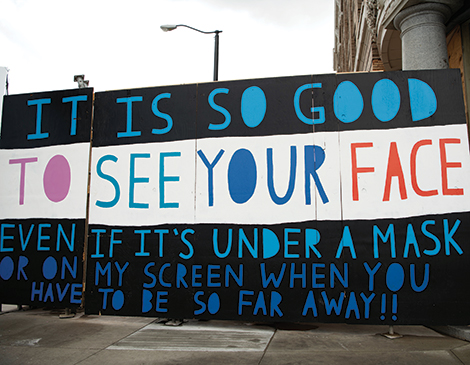 it is so good to see your face (April 2020): Erin Guido
Detroit Avenue and West 25th Street, Cleveland
Inspiration: As the coronavirus raged in early April, a car crashed into the Forest City Bank Building in Ohio City, the former location of the Ohio City Galley. Hoping to lift the public’s spirits, the building’s owner asked Guido to create a positive message on the temporary scaffolding, which she crafted freehand using just brushes and house paint. “Through this whole bizarre time, now more than ever, I see the value of being with people. Even though we can’t be with people like we normally can, it’s just so nice to be able to see people, either in-person through a distance or with a mask on,” says Guido, who also designed Love Doves. “I’ve never been on so many video chats, but it actually is really nice to see people’s faces.”