Take a warm evening stroll through Lakewood, Old Brooklyn or Detroit Shoreway, and you just might hear the sound of music coming from a resident’s front yard.

In May, classical group Opus 216 launched a series of Front Yard Concerts as a way to continue working during the shutdown of the state’s event and entertainment sector. Often performed from a resident’s front porch, backyard or driveway to a group of socially distanced neighbors, these shows are an effort to offer a safe live music experience.

Playing everything from classical to Irish fiddle to pop hits, violinist and Opus 216 director Ariel Clayton Karas started doing the small yard shows soon after quarantine began and has since performed more than thirty-five neighborhood concerts.

“A neighbor of mine reached out and said that she wanted me to just come play in her front yard,” says Clayton Karas. “The emotional response to hearing music, there were tears, and it was just really, really special. I don't think I was anticipating how much of a need there would be for this.” 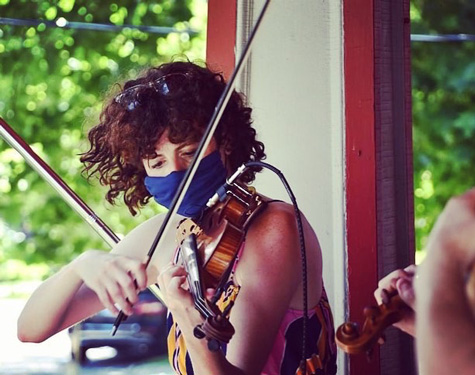 Since then, ‘host homes’ have requested their own yard concerts. Clayton Karas operates on a pay-what-you-can model, averaging around $75 per musician, and plays as a soloist, in a duo or trio with other members of Opus 216. Neighbors and musicians stay distanced, and the host homes don’t usually advertise outside of their neighborhood to keep the concerts small.“

They're all just really special,” says Clayton Karas. “I get home every night and I tell my husband that it was so special. He goes ‘You say that about all of them!’ But it is and people just really connect with it.”

This year, Clayton Karas has worked to diversify her audience by teaming up with 2020 West Schaaf Gallery owner Mike Gutierrez to raise funds for 15 concerts in neighborhoods outside of the “arts core.” The partners were able to generate $3,000 through donations and a matching grant from Cuyahoga Arts and Culture.

"Most of the performances I've done so far have been for more privileged families on Franklin Boulevard, in Battery Park, people who normally have the resources to pay us,” says Clayton Karas. “I really want to exclusively do the performances in Detroit Shoreway for parts of the neighborhood that just don't always see our programming up close.” 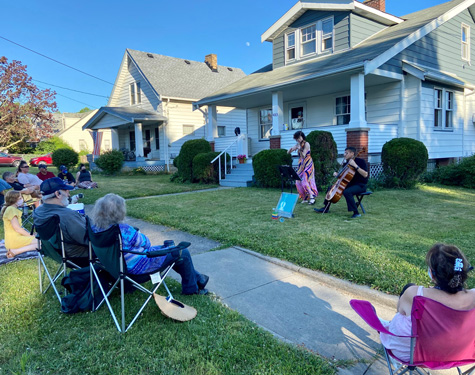 Though the pandemic canceled and postponed dozens of events for Opus 216, including the many weddings the group typically plays throughout a summer, the Front Yard Concert series has been an unconventional way to relieve tension for both musicians and neighbors.

"We had one listener at a backyard concert we did in Shaker Heights who said [their] dad died of COVID three months ago in New York City and [they] haven't left the house in 88 days and this is the first time [they’ve] left the house,” says Clayton Karas. “We are so grateful for the chance to have a platform to share music, even if that means that someone's driveway.”
Share this story: