Butcher and the Brewer’s Spice Spice Baby
Throw yourself a ’90s-themed Christmas party with this winter warmer-style beer. The beer, which comes in 16-ounce four packs available at the brewery, is spiced with German malt bill and notes of citrus peel, cinnamon, ginger and nutmeg. butcherandbrewer.com/brewery

Collision Bend Brewing Co.’s 8 Crazy Nights
With Hanukkah underway, we’re cracking open cans of this winter brew from The Flats’ brewery. It has a bold, spicy taste thanks to cinnamon paired with a little sweetness from honey and Ohio-grown apple cider from Quarry Hill Orchards. And with 8.5% alcohol by volume, it’s sure to live up to its name. collisionbendbrewery.com/beer

Fat Head’s Brewery’s Pimp My Sleigh
Of course you know the classic Holly Jolly from the Middleburgh brewery, but this newer Belgian-style Christmas ale harkens malty flavors of dark fruit, raisins, figs, anise and spicy phenols. Not just flavor, it packs a punch at 10.5% ABV. fatheads.com/pimp-my-sleigh 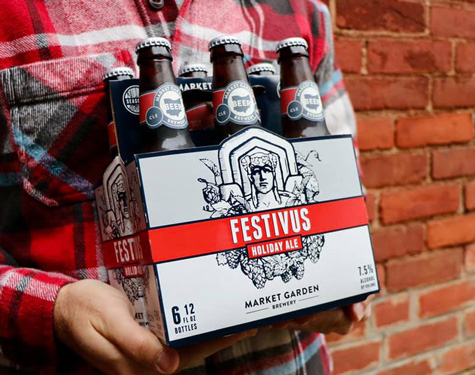 Masthead Brewing Co.’s Robot Santa’s Christmas Ale
If nothing else, this beer takes the cake for best name. But if the robots do invade our holiday season, we’re cool with it as long as they bring this delicious ale spiced with ginger, nutmeg, coriander, honey and orange peel. The Downtown brewery, where you can pick up four packs of 16-ounce cans, also offers a holiday IPA called Sleigh All Day. mastheadbrewingco.com

Noble Beast Brewing Co.’s Cookies And Milk
This bourbon barrel-aged imperial stout, which rested in a Heaven Hill bourbon barrel for over a year, is the holy grail of 2020 Christmas beers. With only 60 cases made available and cans are currently sold out on the brewery’s website, you might have to head to the red and green market for this one — or just fill up a growler at the brewery. noblebeastbeer.com

Platform Beer Co.’s Yule Jude
If you just can’t abandon your beloved IPA for a Christmas Ale, give this Ohio City brewery’s Yule Jude a try. Not only does it dial back the ABV compared to other holiday ales at just 6%, it also adds just a touch of cinnamon to the hoppy recipe based on the iconic Haze Jude. Snag it in a “Holiday Twelve” variety pack with the South Pole Elf, which is designed to taste like a Christmas cookie. platformbeer.com/distribution-brews

Saucy Brew Works’ Three Hos
Santa’s favorite sip is a robust red ale flavored with nutmeg, cinnamon and ginger — or “Cleveland-style,” as the Hingetown brewery calls it. Even the big man himself gets a break with weekly beer deliveries. saucybrewworks.com 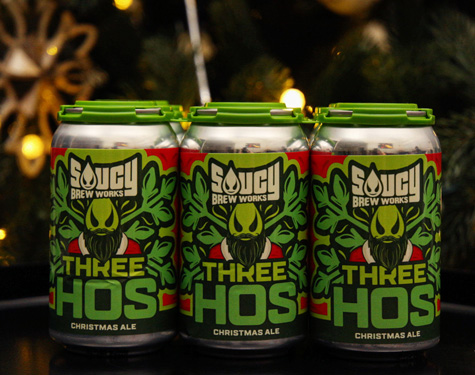 Bonus: Pub-Exclusive Barrel-Aged Christmas Ale
OK. We had to cheat a bit and show some love to the classic Christmas Ale. While it’s not available in a can or bottle like the rest of these brews, the Ohio City taproom is offering a pub exclusive of the iconic beer aged in a bourbon barrel. Pick up a growler or a crowler to-go as well as Christmas Ale-flavored sausage, s’mores and more under the Christmas Specials tab on its online ordering platform. greatlakesbrewing.com