Gone are the days of choosing between gray hot dogs and cardboard-crust pizza before a live show. Today’s music venues are elevating the food they serve to the level of the artistry they put on stage. At Coda in Tremont, rock fans leave the mosh pit to enjoy sushi from Ginko and wings from Dante, while Mahall’s 20 Lanes just might have the best fried chicken in Lakewood. “There is so much competition right now for where people can spend their entertainment dollars,” says Bryce Norton, front of house manager at Beachland Ballroom & Tavern. “We want to make sure we’re giving them the whole experience, not just a good product on stage, but great food and great service.” Here’s a taste of three music venues where food is the star of the show.


Jilly’s Music Room
Sometimes you just want a little bite before the main event. Jilly’s Music Room revamps the idea of tapas with eclectic takes on small plates such as the trio of house-made cheese sticks ($6), enormous breaded slabs of mozzarella, smoked cheddar and pepperjack. The 100% gluten-free menu also reintroduces bites such as chicken wings ($9) or flatbread pizzas ($10-$12) to those with dietary restrictions. “We worked very hard to develop a secret gluten-free batter that would be as light and crispy as typical fried food,” says owner Jill Bacon Madden. 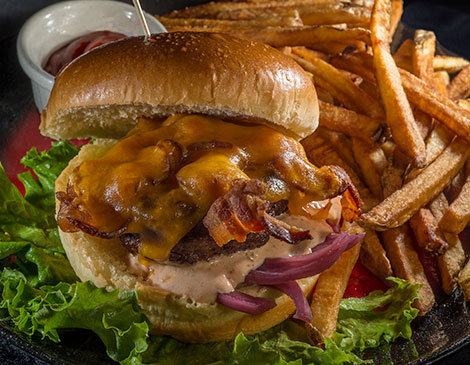 Beachland Ballroom & Tavern
This Saturday and Sunday brunch deserves as much veneration as the beloved former Croatian Liberty Hall decor and legendary shows of the White Stripes and the Black Keys. Try one of six vegan bloody marys ($8) featuring a smoky, house-made mix and elevated breakfasts such as the Eggs Beachland ($12), a twisted take on an eggs Benedict with Asiago cheese and smoked Canadian bacon from R&D Sausage Co. across the street. “Our menu reflects what the Waterloo neighborhood is all about,” says Norton. “It’s honest, hardworking, eclectic and inclusive.”

Try This: The house-made fried chicken biscuit sandwich ($11), a frequent special, comes with flourishes such as rosemary baked into the biscuits. 15711 Waterloo Road, Cleveland, 216-383-1124, beachlandballroom.com 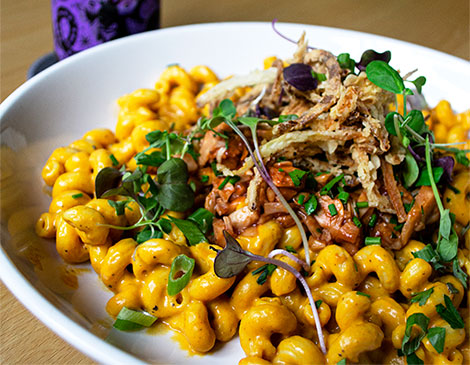 The Winchester Music Tavern
Sure, we’ll turn up on Tuesdays for the $5 build-your-own burger night, but don’t overlook Vegan Mondays at this Madison Avenue music venue. Head chef John Hagerty doles out a rotating seasonal menu each week with options such as the tostada ($11) featuring house-made barbecue jackfruit with chipotle lime slaw and a crema. Even the Beyond Burger ($12) and the mac ’n’ cheese ($9) are perfect imposters. “It’s vegan but it’s also delicious and healthy, but also a little junk food-y,” says Hagerty. “I’m not vegan myself, so I’m still looking for that acid, salt and fat, that decadence.”