The secret recipe to Orlando Baking Co.'s longevity, as it celebrates its 150th year anniversary, isn’t much of a secret at all — it’s in the name.

A career in the family business tends to start early. For John Anthony Orlando, his first paycheck was earned at age 11, for delivering bread with his father. Today, John Anthony may still be found honing this craft on the bakery floor, even as he carries the torch as the president and CEO of this local legacy brand.

“You always had a passion about it,” John Anthony says. “It was a pride. We had our name on the bag, and we were going out there to sell the bread and take care of the customers.”

Serving the company’s current customers is far less arduous a task than for generations past. Cooperation among family members has remained a constant, but in the early days, it was a necessity — for stacking and hauling crops in the mountains that overlooked the Italian village of Castel di Sangro, where Giustino Orlando founded the company in 1872, or to man the “Orlando Bros. Baking” horse and wagon that delivered hearth-baked bread and pasta in Cleveland around the first American location on Central Avenue in 1904. 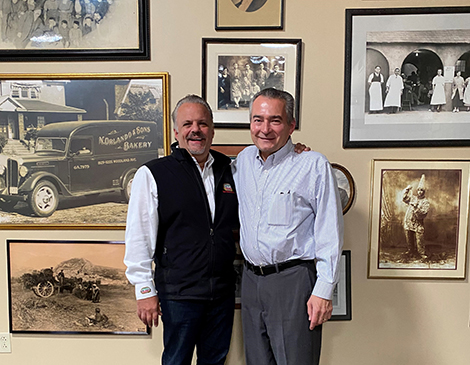 Before settling at its current location at 7777 Grand Ave., company headquarters moved around Cleveland’s east side. Nick Orlando, vice president of sales and marketing and cousin to John Anthony, recalls early memories of growing up just next to the bakery when it was located on Woodland Ave.

“The family was all centered around the bakery there,” Nick says. “There were so many people, everybody working all-hand work.”

The business’s operation has outgrown its humble beginnings by leaps and bounds — in the past 20 years, Nick estimates the company has at least doubled in size to employing around 300 people, with an eye toward further growth. Utilizing nine production lines, the bakery produces thousands of loaves of hearth-baked bread per hour, in more than 250 varieties. 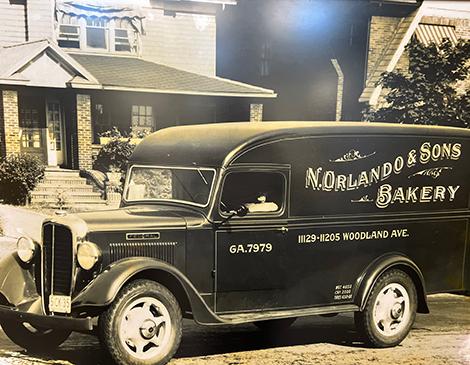 The symphony of Italian voices that once guided production has been replaced by the whirring of spinning metallic racks, stories-high, cooling cooked bread, or by the warning beeps and flashing lights of heavy machinery. Though today’s production methods have taken some of the soul out of the baking process, the company has looked for ways to maintain a familial atmosphere.

According to human resource manager Kathy Perry, as many as seven languages can be heard spoken by employees of the diversifying staff. Since assuming her role last December, Perry has taken initiatives to improve accessibility in employee documentation and advocate for the use of tools such as Google Translate.

Such a commitment to the workforce has resulted in some employees carrying out careers with the Orlando Baking Co. for upward of three to four decades.