Matthew Spinner is cooking up a history lesson for Clevelanders. With the launch of his new small plates menu at Tremont’s Ushabu, the chef takes diners on another tasty anthropological study of Japan as he’s done with his last two explorations of the country. The inspiration this time comes from the Ainu people, an indigenous group that predated Japanese settlers by 4,000 years.

“All those techniques that we associate with Japanese cuisine came to Japan by China,” Spinner says of ingredients such as rice, soy and miso. “Whether or not the Japanese want to admit that is another whole thing entirely.”

The menu also highlights flavors such as maple syrup and smoke. To resemble the original cooking process, Spinner cooks Ainu-inspired protein — salmon, venison and wild game — with only charcoal and wood fire. Since Cleveland sits on a similar latitude line as the Ainu’s region of Japan, Spinner is able to forage many of the greens, berries and other ingredients locally — just like the Ainu would have.

For more on the history of the Ainu people and how their culture fits into Ushabu’s latest menu, take a look at Spinner’s new ebook, “The Song The Owl God Sings,” which is designed to be read with the meal.

But the best way to get the true Ainu experience is to head to Tremont and try the menu, which runs through December. Here are a few of our favorite dishes. 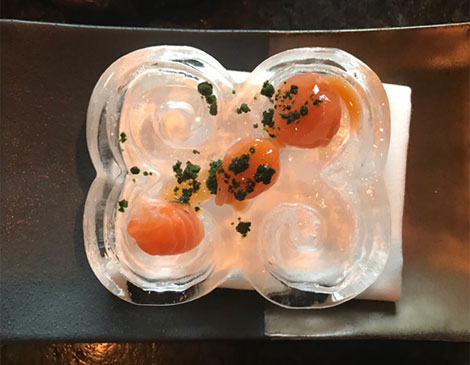 Salmon was the essential protein of the Ainu people, Spinner says. On a plate of ice — carved into the Ainu symbol for strength by a local ice carver — this dish is like salmon sashimi where the salmon comes out half-frozen and melts into a tender, fatty bite as it warms. It makes sense since the dish’s name translates to “melt in your mouth,” Spinner says.  The salmon is topped with beni tade, which is a water pepper, and a drizzle of rose hip gel. “Arguably, the Ainu invented sushi,” Spinner says. 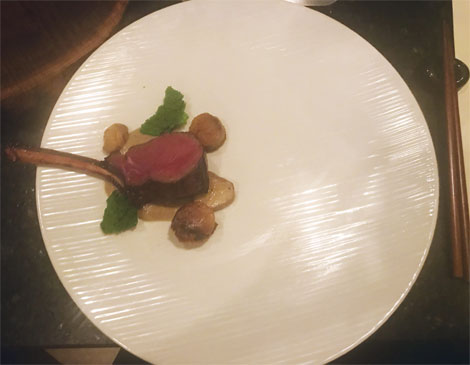 As the Ainu term for venison, this dish shares similarities to the cuisine of Native Americans. Spinner takes a venison chop and cooks it on charcoal until medium-rare. It’s plated with dumplings stuffed with venison leg sausage, roast mushrooms, a dehydrated scallion lichen that looks like a green crouton and a sunchoke puree similar to hollandaise. “Venison is a secondary protein for the Ainu,” Spinner says. “They couldn’t live without it.” 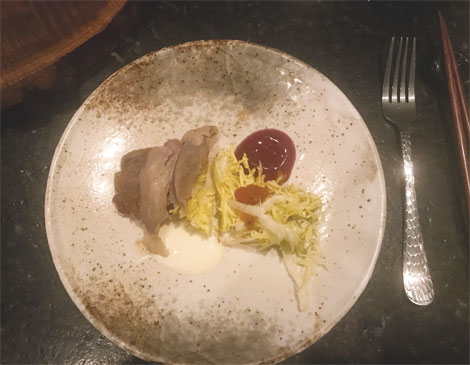 Another way the indigenous group resembles Native Americans, the Ainu people endured a period of ethnic cleansing as other groups settled Japan. The natives' farms were overhauled. Hunting and fishing became illegal. But culinary genius was found in the Ainu’s use of starter potatoes — potatoes that couldn’t be taken to market and were left in the fields. The winter’s period of freezing and thawing removed water and left only starch, resulting in a strong potato taste. Spinner mimics the process by using a freezer and refrigerator for a potato pancake to pair with a duck leg. Foraged grapes, bitter greens, rowanberries and honeycomb accentuate the dish. “These are all things the Ainu would go out and forage in the fall,” Spinner says. 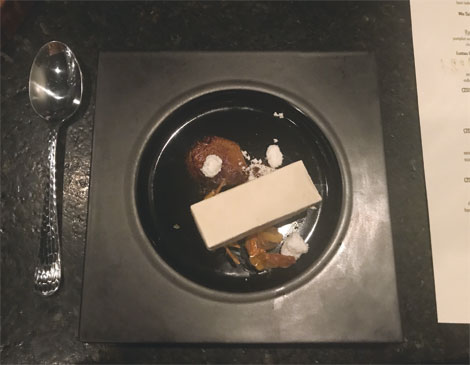 The Ainu also had a sweet tooth. For dessert, Spinner creates a maple semifreddo by mixing whipped cream, versawhip and maple syrup into a foam and freezing it. It’s plated with a bruleed sweet potato, coffee-espresso dusting and some candied pumpkin skin that resembles a flaky piece of caramel. “It’s like a cross between maple ice cream and Creamsicle,” Spinner says.

Ushabu's Matthew Spinner Is A Professor of Japanese Cuisine

The Tremont restaurant dives into Japan's culinary history - one region at a time - with a well-researched menu.

Tremont's Ushabu Lets You Be Your Own Chef

Get familiar with shabu-shabu, a traditional Japanese cooking method.

A Clevelander's Guide To Oysters

From East Coast and West Coast oysters, to tips on how to shuck, our guide will have you hooked on oysters.