We may think we’re experts on ramen. Heck, that’s how we survived college. And with spots such as Otani Noodle and Jonathon Sawyer’s Noodlecat, we’ve graduated from the 25-cent dorm room staple to more advanced takes on the Asian noodle dish.

But since Chinese-born Shuxin Liu opened Xinji Noodle Bar in July, he’s taken our education even further with an exploration of classic Chinese techniques paired with the very American philosophy of using farm-to-table ingredients. To make his five variations of ramen, he uses chicken and pork bones from Harmon Creek Farms in Hartville and Tea Hills Farms in Loudonville. After boiling bones, he adds meat and aromatics such as scallions, ginger and herbs. 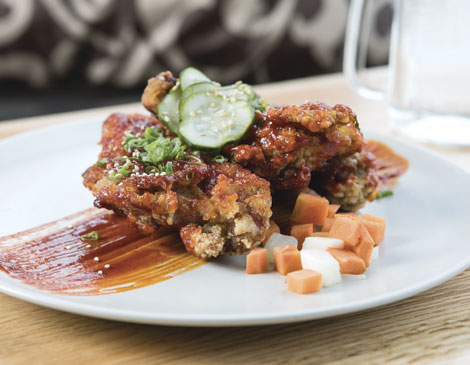 The shoyu ($12) is a master class in restraint. A bowl of steaming hot chicken broth arrives with a pile of chewy noodles, chicken meat and naruto, a cured fish cake with a pink swirl in the middle. Resist the urge to add in extras such as pickled mushrooms, bean sprouts or menma (a citrusy, marinated bamboo shoot).

It’s best to experience this classic as Liu intended. “I like the more basic broth, the ones that are just chicken, scallions and the noodles,” he says. “That’s all I need.”

But there’s more to Liu than just ramen. The steam buns, dumplings and glorious heat from the Korean fried chicken ($9) are course requirements. “I want to introduce people to a new era of Asian cuisine with some new ingredients,” Liu says.