Like a rack of ribs patiently slow cooking, Cleveland’s barbecue scene has taken a while to get up to temperature. But the times, they are a changin’. Since 2012, barbecue spots have become blazing hot throughout Northeast Ohio — including Michael Symon’s Mabel’s BBQ — introducing Cleveland’s dining scene to the simple treasure of smoked meats. “Some people don’t know what good is unless you’ve had good before,” says Shane Vidovic, co-owner of the Proper Pig Smokehouse. He thinks the barbecue smoke is only going to get thicker. “Cleveland is so underserved in barbecue, there’s probably room for a lot more.” Get to know the trend with this crash course in our barbecue history.

1958: Beckham’s B&M Barbeque
These roots go way back. Greg Beckham’s Alabama-born father opened the first outpost in Hough. Since then, the younger Beckham has relocated and expanded to four locations and a food truck. While Beckham’s still slathers its smoked ribs ($15.99 for half-slab dinner) in a sweet sauce, it’s hard not to taste the history in each bite. Pro tip: the fried chicken ($9.99 for half-chicken dinner) is great with spicy barbecue sauce. Various locations, gotribs.net 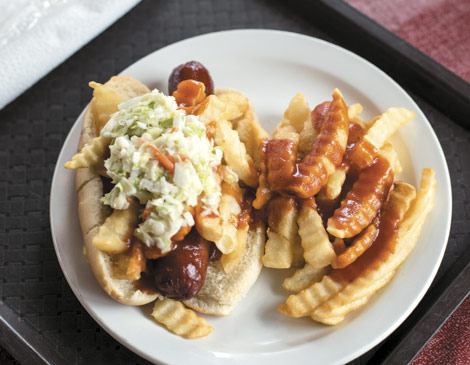 Fall 2012: Rib Cage Smokehouse and Bar
One of the first in the new wave of barbecue joints, Rib Cage looks like a dingy dive bar. But the aroma coming from the custom-built wood smoker out back tells another story. While the brisket ($18), spare rib dinner ($18) and bourbon-baked beans ($4) scream traditional, it also opened our eyes to turkey ribs ($19), juicy on-the-bone smoked turkey breast cut into riblike strips. Although the slather-in-sauce debate still rages, we appreciate Rib Cage’s 10 sauces, including the tangy Carolina mustard vinegar. 2214 Lee Road, Cleveland Heights, 216-321-7427, ribcagesmokehouse.com 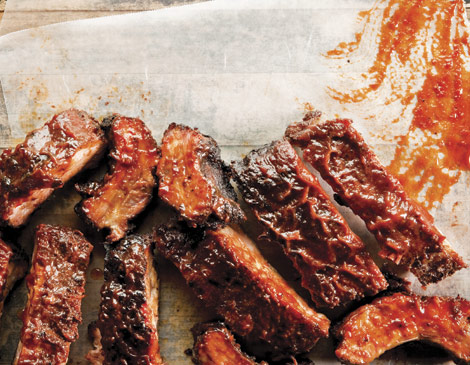 October 2014: Oak & Embers Tavern
A blaze put it out of commission for a few months after opening in March 2014. But owner Marc Garofoli reopened down the street and has been stoking our flame for ’cue since. Each meat, whether chicken ($14) or brisket ($14.50) gets a specific rub then smokes over hickory wood and comes pre-slathered in a bourbon-based sauce. Watch out for a Hudson location opening this spring. 8003 Mayfield Road, Chesterland, 440-729-4030, oakandemberstavern.com 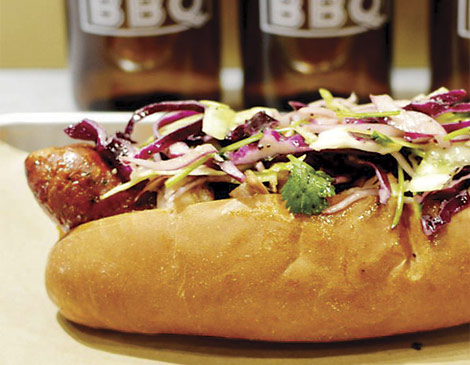 April 2016: Mabel’s BBQ
We waited what seemed like decades for Michael Symon’s barbecue. Whether savory brisket ($13), perfectly gamey lamb ribs ($16 for a half-slab) or spicy kielbasa ($10) smoked over cherry and apple wood, the food is Cleveland’s grand entrance into barbecue. The optional house-made sauce, which uses Bertman Ballpark Mustard, and sides such as spaetzle ($6), hammers home the fact that this is Northeast Ohio born, bred and delicious. 2050 E. Fourth St., Cleveland, 216-417-8823, mabelsbbq.com 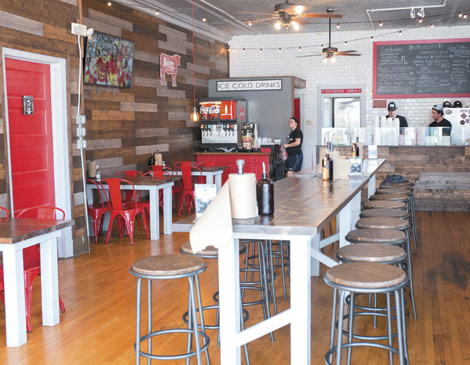 April 2016: The Proper Pig Smokehouse
It may have opened the same week as Mabel’s, but Proper Pig started as a food truck in 2014 and became a Lakewood fast-casual restaurant. True to its Texas-style, the brisket ($10 for a half-pound) is rubbed in mostly salt and pepper, smoked and then sliced to order. “We like to let the meat be the star of the show,” says Vidovic. He and co-owner Ted Dupaski are opening a Mentor location in spring 2017. 17100 Detroit Ave., Lakewood, 440-665-3768, properpigsmokehouse.com 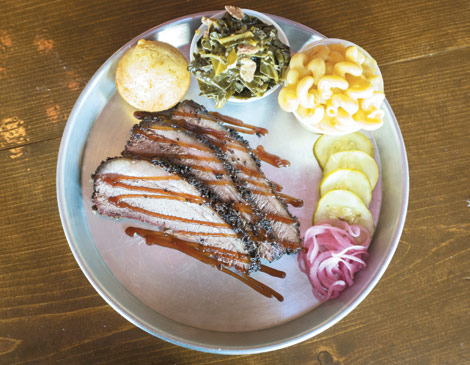 August 2016: Woodstock BBQ
Robert Togliatti traveled the South as a photographer, stopping into barbecue spots in Memphis, Nashville and Kansas City. Pairing those flavors with more than 10 years of backyard smoking experience, he opened Woodstock. Try the brisket ($11) rubbed with salt and pepper and smoked over hickory and oak, or the spicy Memphis-style Brunswick stew ($5) of rib meat, brisket and pork in a tomato-based broth. “I’m really just grabbing all these ideas from different places,” Togliatti says. 13362 Madison Ave., Lakewood, 216-226-8828, facebook.com/woodstockbbq

September 2016: Boney Fingers BBQ
Tucked inside the Arcade, you’ll find this barbecue stand from three local guys who smoke their meat for up to 16 hours to get tender, juicy results that sings without any sauce. Barbecue for breakfast? Yep. Order the Boney Breakfast ($6.99), two eggs with hash browns and toast along with your choice of pulled pork, brisket, smoked chicken, Polish sausage or bacon. 401 Euclid Ave., Cleveland, 216-736-8760, boneyfingersbbq.com

October 2016: Mission BBQ
This fast-casual chain is the most patriotic we’ve ever felt about barbecue. Seriously. The walls are adorned with pictures and memorabilia honoring the military and the national anthem plays at noon every day. The chain also regularly hires veterans and donates to military charities. Meats such as brisket ($8.79), pulled pork ($7.29) and salmon ($9.99) are smoked on-site and sides such as mac ’n’ cheese ($2.09) and baked beans with bits of brisket ($2.04) are all house-made. While the Parma location is one of 45 the Maryland company has opened since 2011, we’re ready to give it a hearty Northeast Ohio salute. 8225 W. Ridgewood Drive, Parma, 216-487-6274, mission-bbq.com

October 2016: Barabicu Smokehouse
Jon Ashton and Danny Cassano wanted to get sweet on Cleveland’s barbecue resurgence. But they’ve made a name for themselves by doing the opposite. Instead of putting sugar in their rubs, Ashton and Cassano cook their meats ultra slowly. Brisket ($11 for a half-pound) is smoked for 18 hours and pulled pork ($7 for a half-pound) for 10-12, so a natural sweetness has time to develop. “We don’t rush anything,” Ashton says. After slow love like that, sauce is an afterthought. “You shouldn’t need it,” Ashton says. Plus, it turns out that slow goes fast. Barabicu regularly sells out of brisket and ribs within a few hours of opening at 11 a.m. “I can’t jam enough of that stuff into the smoker, man,” Ashton says. 5767 Ridge Road, Parma, 440-481-3057, facebook.com/barabicusmokehouse

November 2016: Ribsticks
Stop by Jay Lee’s small restaurant to get a degree in barbecue science. While Lee is following Symon with a house-made mustard and vinegar sauce, he is taking things a step further. Lee uses ground mustard on his rubs for brisket and ribs. Lee also has an innovative smoking approach. In an effort to keep tight control on temperature, Lee wraps meat in butcher’s paper and foil. As the meat smokes, Lee repeatedly takes the package out, unwraps it, applies more spices and sauce, then sticks it back in. The result is juicy, savory ribs ($12.50 for four ribs) and brisket ($12.95 for a half pound) served with a dollop of sauce. “Without sauce, it’s just the meaty flavor,” he says. “If I can put on the right amount, it will balance the flavor.” 13892 Cedar Road, University Heights, 216-202-4105, ribsticksbbq.com


Spring 2017: Smokin’ Q’s
Chef Zach Ladner knows a thing or two about ’cue. The native Texan ate plenty on his grandfather’s nearby ranch. He brings that central Texas swagger to Smokin’ Q’s, the new Mayfield Village restaurant being opened by Giovanni’s owner Carl Quagliata. The brisket will be prepared traditionally, with a black pepper rub and tomato-based sauce, but Lardner plans on mixing things up with two presentation styles. He will offer the classic coleslaw, pickles and house-made brioche. But El Jefe style will come with house-made tortillas, guacamole and salsa. “There’s an explosion of barbecue,” Lardner says. “But we want to make something that can stick with customers and create more memories and sensations.” 718 SOM Center Road, Mayfield Village, 440-646-0411

Spring 2017:Ohio City BBQ
This new takeout spot across from Jack Flaps will feature barbecue favorites such as ribs and brisket made in a custom-built smoker, along with sides such as coleslaw and mac ‘n’ cheese. Expect decor like something out of 1960s Memphis. 3829 Lorain Ave., Cleveland