Being one of only two stands that smoke their own meat, third-generation Czuchraj Meats wants to stay true to its Ukrainian roots. “We want to bring back the old European style that has been passed down to us,” says owner Jill Chucray. “It’s a dying art, but it’s tradition.” The buy: Make a meat and cheese dip or add some spice to a pot of chili with its fresh chorizo ($4.59 per pound). 216-696-7083, jandjmeats.com 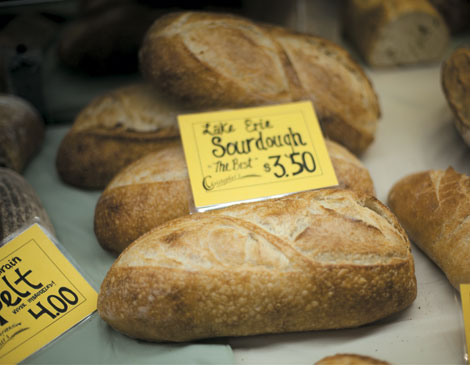 Whether it’s sourdough, broiled water bagels or Pugliese Italian bread (a rustic peasant loaf similar to ciabatta), every item at Christopher’s Bakery is made free of preservatives, dough conditioners and trans-fat. The buy: Grab a loaf of its popular seven-grain bread ($3) made from whole grains such as flaxseed, sunflower seed, sesame seeds and honey. 440-286-2722 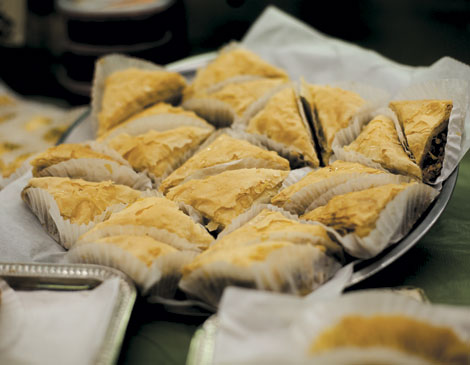 At Judy’s Oasis, locals can relish in quick Middle Eastern eats such as spinach and feta pies, grape leaves, hummus, house-made pita bread and desserts such as pecan queens and pistachio baklava. The buy: Garlic toom ($11.99 per pound), a versatile whipped sauce made from garlic and oil, can be used as a veggie dip or mixed into mashed potatoes for a zesty kick. 216-252-3444, judysoasis.com

For 39 years, Meister’s Food has offered local eggs, cheese, yogurt, antipasti salad and pierogies. But owner Ed Meister’s house-made peanut butter is the main attraction. Made using a 1912 machine, the spread is crafted solely from whole matured peanuts. “The machine is always running,” he says. The buy: The higher-fat concentration found in Wisconsin butter ($5.50 per pound) will make your cookies and cakes richer in texture and flavor. 216-566-7347 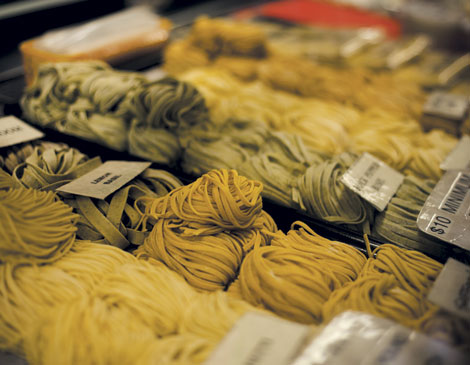 Made at its Detroit Avenue headquarters and shipped to the market three days a week, Ohio City Pasta is ready after boiling for only 45 seconds to four minutes. Choose from more than 20 flat-cut pasta flavors such as garlic and chive, 15 raviolis filled with ingredients such as lobster and cheese, eight kinds of gnocchi and more. The buy: Pair the spinach and cheese ravioli ($7.25 per dozen) with the Alfredo or cream sauce ($9 for 16 ounces). 216-241-5444, ohiocitypasta.com

Find Lake Erie walleye and Australian roughy at Cantonese Classic Seafood. Of the latter, employee Michael Hauff says, “It’s a fish 1,500 feet into the ocean, and takes about 10 years for it to grow so we can eat it.” The buy: Try the omega-3 rich Mexican parrot fish ($17.99-$22 per pound). 216-241-7680, classicseafoodatmarket.com 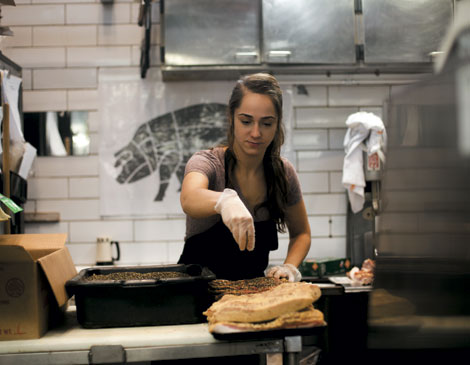 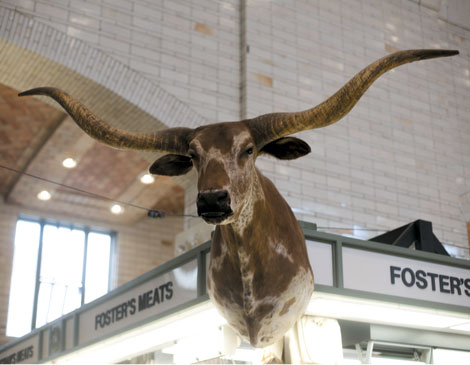 Foster’s Meats owner Brian Foster had worked at other West Side Market vendors crafting his butchering skills before opening his own stand 14 years ago. He specializes in custom cuts and chops of Ohio-raised lamb and goat, as well as grass-fed beef. The buy: Its 95 percent lean ground sirloin ($4.99 per pound) makes for a great meat base when cooking up chili. 216-861-7541

Sure, you can find local Amish cheese and fresh brown organic eggs at Annemarie’s Dairy, but Annemarie Geffert’s 21-year-old stand is best known for vegan and vegetarian options such as vegan eggnog and cashew spreads. The buy: Use the minced meat ($5.99), made from apples, spices, brandy and raisins, as a pie or pastry filling. 216-344-9333 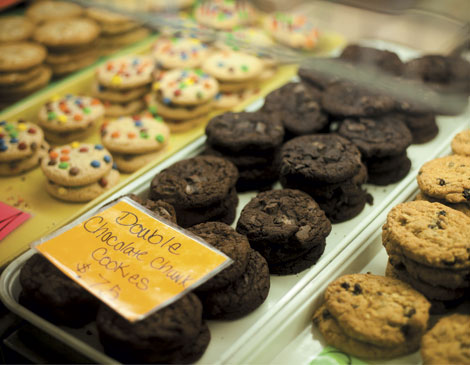 With recipes passed down from her father, who opened his Spanos Bakery in 1965, Tina Spanos has been crafting baklava, galaktoboureko, cream puffs and other European desserts out of her home kitchen since she took over the family business in 1994. The buy: The made-from-scratch kolaches ($9.50 per pound) are filled with a cream cheese, apricot or raspberry. 216-579-1138 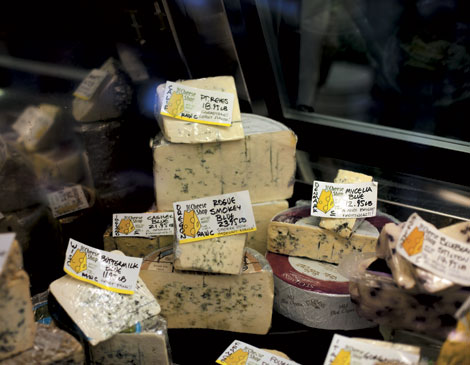 Cheese lovers go gaga over the 200 options made from goat, cow, sheep and buffalo milk at The Cheese Shop. Although you’ll find local faves like Lake Erie Creamery, the spot is best known for its imported selections from Norway, France, Spain and more. The buy: Grab Parmesan rinds ($1 for a 4-ounce bag) and toss one into your next batch of marinara or soup for added richness. 216-771-6349

For 19 years, Narrin Spices & Sauces co-owner Narrin Noud-Carlberg has collected uncommon spices, oils, rice, flour, beans and 25,000 hot sauces for the cook looking for something different. “It’s a job in itself just looking for this stuff,” she says. “Not only do I have what you’re looking for, but I can tell you what everything tastes like.” The buy: Toss Noud-Carlberg’s mild blackening seasoning ($6), made with paprika, garlic, herbs, onion and honey, on veggies, meat or in soup. 216-861-0626, narrinspices.com 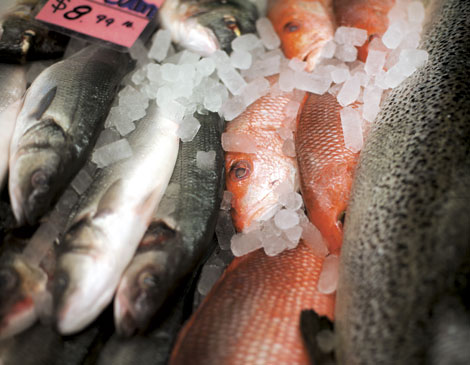 Kate’s Fish specializes in U.S. fish — think halibut, tuna, swordfish and more — with shipments from Boston, Seattle, Rhode Island, Alaska and Florida five days a week. “It really makes a difference when you bring it in whole,” says Kate’s son, Tom McIntyre. The buy: Grill the red snapper ($10-$12 per pound) from Florida whole and pick it off the bone for the best taste. 216-621-7675 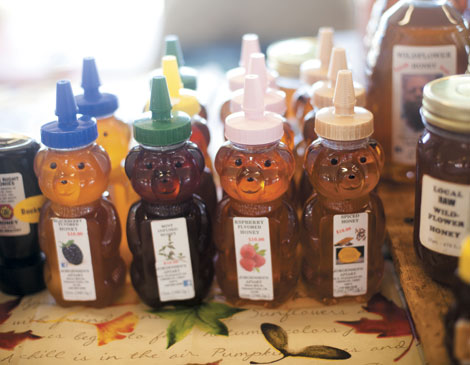 Jorgensen’s Apiary owner Walter Jorgensen greets customers with pics of his honeybee beards and expert beekeeper info. “Unpasteurized honey has pollen, so it helps our immune system and has vitamins and minerals in it,” he says. “You have to eat the honey cold to get the health benefits.” The buy: Use a bottle of raw honey ($10), made from Walter’s hives in Oberlin, as a sweetener for baked goods. 440-774-2710, jorgensensapiary.com 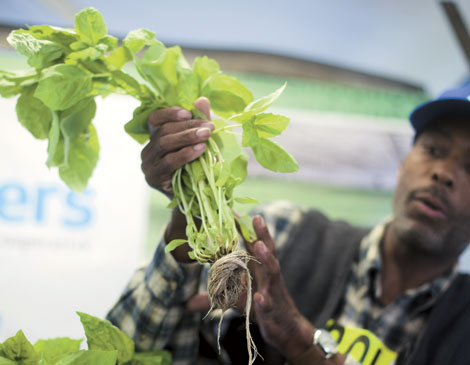 Green City Growers skips the soil and instead grows its butter and red lettuces and herbs inside a hydroponic greenhouse without any genetically modified organisms or pesticides. It also cuts its own crops and leaves the root, which keeps the produce fresh for longer than normal. The buy: Grab a bag of fresh basil ($1) for an added touch of flavor in soups or a fresh pesto sauce. 216-268-0200