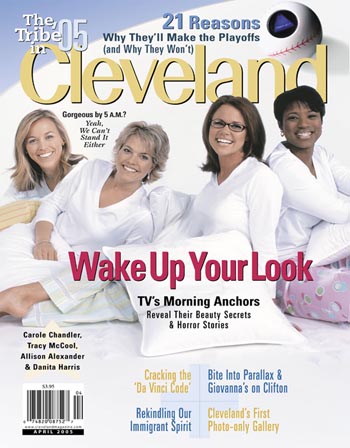 Zach's Back: Parallax Restaurant and Lounge

'95 Cleveland Indians -- Where Are They Now?

Can it really only be 10 years since that magical World Series season — the first since 1954? It seems like a lifetime ago. But when Omar Vizquel signed with the San Francisco Giants in the off-season, the Tribe's final tie to that team was severed. So we

The Union Club's $6.5 million renovation included the creation of a new reading room.

Three years ago, Mark Shapiro promised a contender in 2005. Now, it's time to step up to the plate. So we scrutinize the team, dig into the stats and interview players, coaches, writers and the GM himself to uncover... 21 Reasons Why the Indians Will Win

Joseph Kelly read "The Da Vinci Code" in summer 2003 to see if its claims about early Christianity were credible. Now, the chair of John Carroll University's religion department is a leading lecturer about what's true (and what's not) between the covers o

Field botanist at Holden Arboretum in Kirtland and orchid grower

Face it, your morning beauty routine's a drag. So we enlisted four experts — morning-show anchors Carole Chandler, Danita Harris, Tracy McCool and Allison Alexander — who reveal their tips for looking good, their remedies for beauty emergencies and what t

With a hot new 20-gig iPod in his hands, our writer goes on a quest to fill it with 6,000 of his favorite songs ... or even Jack Fascinato, Little Milton and The Velvelettes.

Cleveland was once a bustling immigrant center, rich with opportunity, energy and innovation. Now, the city's attempting to rekindle that spirit and spark our struggling economy.

George Sipl is the creator of the infamous I-X Indoor Amusement Park jingle. Do you hate him already?

Working Late for the Arts

One of These Daze, a band is going to enter your life: a band that tickles your memory with the Crystal Visions of your youth. It will take you back 40 years, to an era when rock was just beginning. You'll see the Four Horsemen up onstage, speaking just 2

On the healing power of art

Her "jingle jacket" rings and rustles as her arms brush past the hundreds of buttons, beads, bottle caps, bells and film canisters she has sewn onto the old garment.

In addition to the deluge of haiku contests, free-verse workshops and spoken-word slams taking place this month, National Poetry Month, Cleveland Heights will choose its first-ever poet laureate (though it was home to the late Cuyahoga County poet laureat

Cameras focus on Cleveland and the world at the city.s only all-photo gallery.

We paired four top-notch landscapers with two homeowners who need help sprucing up their barren yards. The following pages prove that a well-designed plan can morph a beautiful home into a stunning estate that'll turn the neighbors green.

New York City's Museum of Modern Art just got a $425 million face lift and expansion. But is bigger better? To find out, we sent a writer who grew up in â€” and loved â€” the galleries of the old MoMA.

Four moms ditch diapers for a day and enjoy some pampering and a new look as winners of Cleveland Magazine's reader-makeover contest.