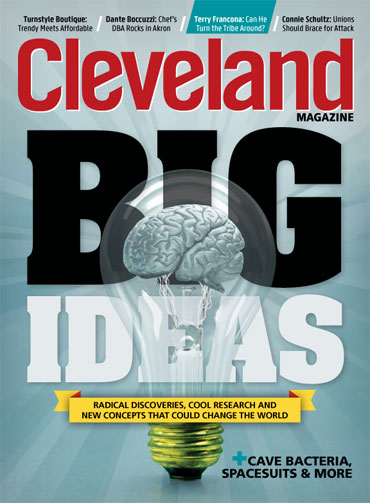 A Dish We Love

Music to Our Mouths

Shifts in how we live, work and play start with a discovery, an innovation, sometimes even an accident. Here are seven ideas being developed locally to keep your eye on.

Exterminator-turned-germinator Damien Forshe makes healthy foods available to low-income families by way of his Rid-All Green Partnership. His urban farm on the city's near East Side serves as a beacon for those in other cities who hope to do the same.

There's a battle going on deep beneath the New Mexico desert as bacteria compete for energy in a dark, sparse environment. The University of Akron's Hazel Barton made a discovery there that could help create new medicines in our never-ending fight against

J. Kevin Berner, the president and CEO of Phycal, sees a future in which algae-based biofuel will provide an economical alternative for fueling jets, cargo ships and power plants. The United States Energy Department is betting $51 million the idea will wo

The Cleveland Clinic's Dr. Leonard Golding and his team are fine-tuning a lighter, simpler and better artificial heart that promises to revolutionize the concept and offer new hope to the nearly 50,000 people each year who face grim odds in the absence of

Case Western Reserve University's Anthony Jack works at the intersection of psychology and philosophy. By studying the inner workings of the brain with MRI scans, he hopes to bridge the gulf that separates analytical thinking and empathetic behavior.

Cleveland Museum of Natural History curator Gavin Svenson's research on the praying mantis is shedding new light on the mysterious and ominious insect. What does his work mean for a better understanding of evolution as a whole? More than you think.

NASA's astronaut spacesuits are a remnant of the 1970s and much in need of a technological update. That's why NASA Glenn Research Center's Scott Bleisath and his team are helping build a new suit that can take us back to the moon and on to Mars.

Kent State University's Andrew Curtis is one of the first to use a GPS-enabled consumer video camera to methodically chart the path of natural-disaster recovery in places such as New Orleans and Joplin, Mo., offering insight not only into how we respond t

There is nothing inspiring about a cubicle. Dan Cuffaro, the head of the Cleveland Institute of Art's industrial design department, has invented a better, flexible workstation that's also good for the planet by making use of wood otherwise destined for th

With the Yankees set to open the Tribe's home season April 8, there's no better time for a rousing round of opening day bingo.

Terry Francona returns to Cleveland, where his father, Tito, played in the '60s, where he spent one season in the '80s and where he broke Indians fans' hearts in our last shot at the World Series. Now, the new manager may represent the team's best hope to

As threats to unions spread across the Midwest, Ohio's organized labor needs to unite to prepare for the next battle.

Agape gallery aims to do good while showcasing beauty.

Designs on a Dime

Received a refund this tax season? We've got the perfect way to hold on to your money in style.