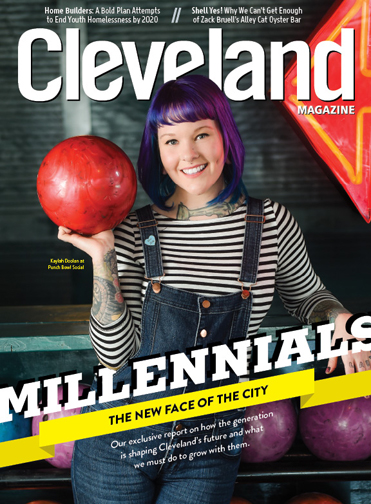 Get your caffeine fix with this cold brewed glass of joe.

Get your fix from any of Eddie Cerino's 11 burgers.

King of the Jungle

Now with 10 restaurants to his name, Zack Bruell demonstrates yet again why this city never tires of him at the top of the fine food chain.

Get a behind-the-scenes look at an Alley Cat dinner service.

Jud Smith has been performing his own daring act inside of the Brimfield Bread Oven.

These versatile root veggies are a sure sign that spring has sprouted. Get a burst of mellow onionlike flavor with one of these four recipes.

Developer Tony Troppe takes his cues from the Jazz Age.

These local spa treatments will leave you rejuvenated for spring.

Land of the Lost

Life According To ... Bill Guentzler

The 39-year-old Cleveland International Film Festival artistic director talks about his passion for film, what he likes to binge-watch and his least favorite movie snack.

Meet the 28-year-old bike mechanic who lives in Ohio City.

Meet the 30-year-old who is passionate about religion and Cleveland sports.

Joe and Cynthia Connolly enjoy the fruits (and ice cream!) of raising kids in Ohio City.

Our Millennial Moment: How to Find Better Balance

Our Millennial Moment: How to Get Involved

Our Millennial Moment: How to Survive Moving Back Home

Our Millennial Moment: It's Lit!

Meet the 25-year-old full-time blogger who has more than 11,400 followers.

How WKYC's Alyssa Raymond juggles a career, friends and giving back.

Our Millennial Moment: New Faces of the City

Our Millennial Moment: Say What?

The key to reviving Cleveland's neighborhoods lies with angel investors. But how can they be convinced to commit to an area?

The new Public Square is becoming less of a fantasy.

People who leave Cleveland can still have a place in our lives.

We highlight two events at the Cleveland Humanities Festival.

Dive into the Greater Cleveland Aquarium for the Adult Swim happy hour.

A comment from our editor about this month's issue.

Joanna Connors confronts past trauma in search of closure in a moving memoir.

We read between the lines of 67 Shots and Cody and the Mysteries of the Universe.

Melissa Rauch does a 180 in the Olympic comedy The Bronze filmed in Amherst.

Seth Chwast was told he would become a dry mopper, but he found a more creative calling.

It's a seller's market — but here's how to buy smart today and leverage the historically low interest rates.