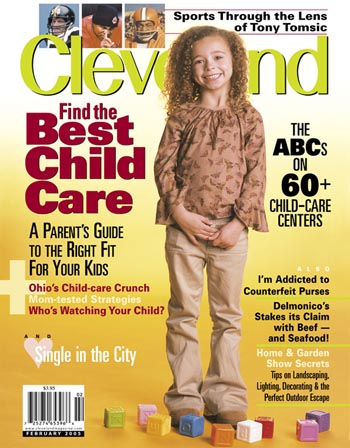 Retro and Then Some: Delmonico's

Invasion of the Purse Snatchers

Confessions of a counterfeit-purse partier

NFL football measures greatness in yards, touchdowns and tackles, but photographer Tony Tomsic captures it all on frame after frame of 35 mm film. As he prepares to work his 39th Super Bowl this month, the longtime Cleveland Press and Sports Illustrated s

One woman peeks inside Cleveland's most controversial men's club.

The Shape of the Square

Shaker Square celebrated its 75th birthday late last year, soon after the waning East Side landmark got a new local owner. Now, The Coral Co. CEO Peter Rubin is reaching beyond retail to forge a new identity for the nation's second-oldest shopping center.

"My life is an open bar," says Melinda Urick, 27, the literary voice of the Warehouse District party girl, who spent 2004 chronicling her barhops through Cleveland's singles scene on her Web site, "Life, Liberty, and Pursuit of Your Boyfriend." We follow

Searching for Each Other

Looking for a sense of serenity, adventure or togetherness close to home? We've discovered just the spot — and it's right in your own back yard.

Finding fun, comfort and instruction on the finer points of falling down a mountain at Hidden Valley Four Seasons Resort

Another Child, Another Search

One mother's journey through more than a decade of day care

Whether you're lucky enough to work for a company with on-site care or are investigating a nanny for your toddler, it's worth examining all of your options.

Moms offer advice from the trenches on making child care work for you.

"A child-care teacher has to be a social worker, a nurse, a referee, a cook at snack time," says Kimberly Tice, executive director of the Ohio Association for the Education of Young Children. "We have to be it all."

The Grown-up's Guide to Child Care

Quality child care makes children better learners and helps solve nearly every social problem, from teen pregnancy to unemployment. Why then is it so hard to find?

We dive into the ins and outs of child care with local moms, teachers and admin

The Oberlin Early Childhood Center is considered one of the best in Ohio. How do they do it? Good funding plus even better teachers.