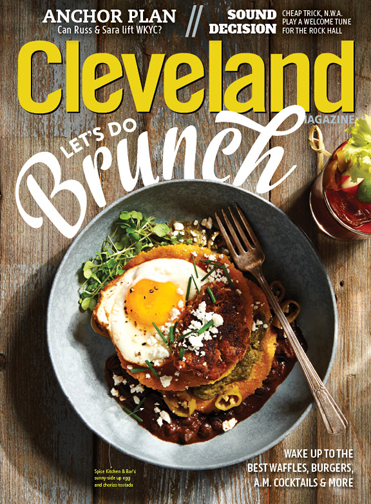 A Drink We Love: Greek Martini

The sandwiches are simple and piled high at Herb 'N Twine.

Local chefs and bars are coupling up to bring innovative cuisine to a stool near you.

It's easy to eat vegan at this downtown Cleveland spot.

This gift pairs two guilty pleasures into one tasty treat.

Score a touchdown at your Super Bowl party with these winning tips and recipes.

Make the most of your brunch outing by following some of these tips.

These burgers aren't your ordinary fast-food fare. Like brunch itself, they creatively combine some of our favorite breakfast and lunch staples for a savory-meets-sweet mashup.

Here is how some of our favorite pancakes, waffles and French toasts stack up.

Here's everything you need to know before going to a brunch buffet.

The Brunch Life: Tackle Your Hangover

In 1912, Johnny Kilbane fought his way to featherweight champ.

We remember when the legendary pitcher was traded to Cleveland.

Denial can be the positive push we need to defy the odds.

The 2016 Rock and Roll Hall of Fame inductees reflect an institution that is finally embracing the rebellion of rock 'n' roll.

Whether single or taken, heat up Valentine's Day with our swoon-worthy guide.

Thousands have chosen to represent Cleveland by becoming a committee Volunteer.

In the spirit of their new movie, the Russo brothers pick sides in contested debates.

You don't have to go to Springfield to get your Simpsons fix, the family comes to town this month.

The release of sealed documents spurs a new exhibit on an infamous Holocaust mastermind.

Bundle up as the outdoor music bash moves to the Flats.

Virtual Flea Markets Are Popping Up Amid COVID-19 Restrictions

Putting all the pieces together for a successful camp season takes preparation, communication and a willingness to try new things. So follow our expert advice for the best summer yet.