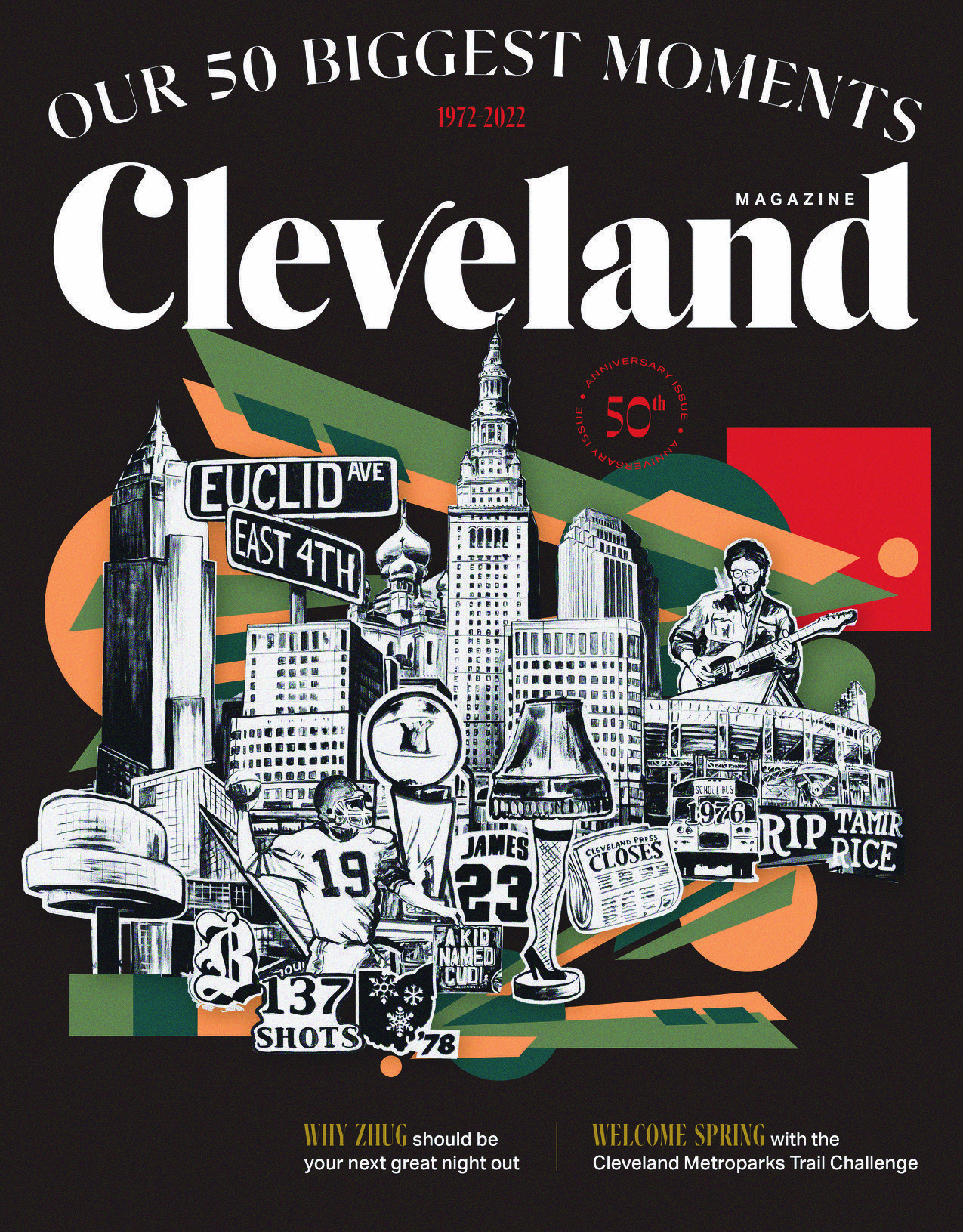 Cleveland's 50 Most Important Moments of the Past 50 Years

Cleveland Magazine launched 50 years ago this month. In honor of our anniversary, we delve into what we see as the 50 most extraordinary moments of the past 50 years — and what they mean to all of us.

Why Kent's Bell Tower Brewing Co. Needs To Be Your Next Foodie Trip

The brewery, which is located in a 150-year-old cathedral, is bringing back the tradition of the European-style neighborhood brewery.

A Note From Our Publisher: Founder Lute Harmon Sr. Looks Back on 50 Years of Cleveland Magazine

After four months of hard work, the magazine has a new look that's modern, stylish and welcoming.

Cleveland's 50 Most Important Moments of the Past 50 Years

Cleveland Magazine launched 50 years ago this month. In honor of our anniversary, we delve into what we see as the 50 most extraordinary moments of the past 50 years — and what they mean to all of us.

With a $20 billion Intel plant headed to Ohio, we ask experts to take stock of how the investment could pay off locally.

Once a common promotion, this disastrous June night at Cleveland Stadium put an end to 10-cent beer nights across the country.

After Timothy Russell and Malissa Williams' car backfired, police started what turned out to be a fatal chase.

The Cleveland 50: A Christmas Story Is Released

Filmed in Tremont, this iconic film became a part of our lives and our holiday seasons.

The Cleveland 50: A Kid Named Cudi Is Released

Scott Mescudi's debut mixtape nodded to Cleveland while it defined the sounds of the 2010's and spoke to a generation.

The Cleveland 50: American Splendor is Released

Harvey Pekar's iconic comic series showed what it was like to be a Clevelander.

Amanda Berry and Gina DeJesus recount the years they lost in Hope: A Memoir of Survival.

The actor sent the stadium off in style with a grand goodbye.

The Cleveland 50: Bone-Thugs-N-Harmony Makes Its Mark

The world heard the sounds of the Cleveland in the band's first album.

The Cleveland 50: Captain America: The Winter Soldier Films in Cleveland

The movie established us in the industry as a convenient — and striking — location to film.

While we already knew the Cuyahoga Valley was incredible, the designation put our park on the same footing as Yellowstone and Yosemite.

Donald Trump, who buzzed into town in a helicopter, accepted the Republican party nominee at Quicken Loans Arena.

Cleveland's "boy mayor" won an improbable election but his fine moment did not last long.

The non-profit alliance focuses on creating a vibrant city core that will attract new residents.

His election to City Council began a new era and helped signify the rise of Black political power in Cleveland.

The state's first microbrewery started its legacy in 1988, launched a neighborhood revival and gave us Christmas Ale.

Completed in 1991, the 57-story skyscraper boosted both our skyline and our collective pride.

National outlets celebrated the impact and legacy of one of America's most-celebrated rock writers.

Erick Trickey recounts how Dimora's infamy tarnished Cleveland politics — and showed that no one was untouchable.

The Cleveland 50: LeBron Leaves With The Decision

The hour-long special let us know LeBron was taking his talents to South Beach, breaking our hearts on a big stage.

In 1999, two brothers began an ice cream empire that's delighted Northeast Ohio with one flavor after another.

A longtime fixture in the pages of Cleveland Magazine, the mob boss died via a car bomb. How the notorious mobster met his end — and what it meant for us.

It might be hard to believe now, but Playhouse Square once had a date with a wrecking ball until Ray Shepardson fought to save it.

The 36-story building will change Cleveland's skyline, gaining its fourth-tallest tower and cementing one of our best corporate partners.

The Cleveland 50: Shooters Open in the Flats

In 1996, Charles Barkley once got in a fight in the basement of the Key West-influenced bar.

The Cleveland 50: Tamir Rice is Shot and Killed

On Nov. 22, 2014, Tamir Rice, playing with a toy guy with no orange tip, was shot by Cleveland police. His mother, Samaria Rice, talks with us about her son and the legacy she hopes to create.

The Cleveland 50: The Browns Come Home

Sure, the Browns' return came in the form of a 43-0 loss, but Drew Carey hosted a one-of-a-kind celebration that writer Andy Netzel will never forget.

After saying he'd only play for Cleveland, the Browns used the supplemental draft to select Kosar.

"The Chosen One" ended up with his hometown team, setting up one of the best periods in Cleveland basketball.

The Cleveland 50: The Cavs Win Us a Championship

Writer Jim Vickers reflects on one of the happiest moments in the city's history, when LeBron made good on his promise to bring a championship to the Land.

The massive undertaking both preserves the historic structure and converts it into an upscale hotel.

Former editor Michael D. Roberts reflects on how The Press, once touted by Time Magazine as one of America's 10 great newspapers, impacted the fabric of Cleveland.

The Cleveland 50: The Deer Hunter Is Released

Shot in Tremont, this haunting film reflects on the impact of the Vietnam War and beautifully captures an era.

The actor, who showed his love for Cleveland at every turn in the show, chats with us about Cleveland, why it will always be home and what it would take to bring him back.

The Cleveland 50: The Era of Big Ticket Projects Begins

In the '90s, Cleveland moved from being the Mistake on the Lake to the Comeback City thanks to new downtown projects.

The Cleveland 50: The Final Stretch of I-90 Opens

Editor Colleen Smitek shares her thoughts on the interstate that ended up going through her backyard — and tore our city apart.

The Cleveland 50: The Indians Become the Guardians

The name is a call to the Guardians of Traffic statues on the Hope Memorial Bridge.

The Cleveland 50: The Infamous Blizzard of 1978

This blizzard for the ages snowed Cleveland in for two late January days.

The Cleveland 50: The Jacobs Brothers Buy the Indians

Three years ahead of the release of Major League, the Jacobs brothers purchased the underdog team in a deal that changed everything and gave us "The Jake."

The Cleveland 50: The Stokes Era Comes to an End

The Cleveland 50: The Towpath Trail Is Completed

The award, for her novel, Beloved, cements our status as a literary city.

While the luxury stories were the first to go, this shopping center was a sign that Cleveland's revival was on the horizon.

Bring on the Spring With These Colorful Cleveland-Made Earrings

Noble Fawn Jewelry, On The Lookout Jewelry and Firebaby Studios have your next looks to usher in the warm weather.

How This Westsider Turned Her Home Into a Tranquil Oasis

The local influencer and blogger has unleashed her creativity on her West Side home, fostering a fluidity that keeps the eye moving while grounding the soul.

How Cleveland Metroparks' Trail Challenge Boosts Your Fitness and Fun

From short jaunts to 11 mile hikes, there's a walk for everyone in Northeast Ohio to try this summer.

With picturesque views of waterfalls, hemlock and caves, this sprawling state park has something for everyone.