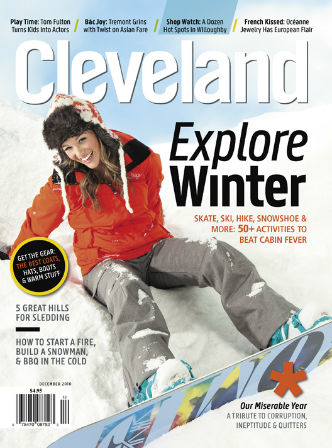 Bác's twist on Asian cuisine sounds strange on paper but works on the plate.

Bác's twist on Asian cuisine sounds strange on paper but works on the plate.

Cold, wet and dark. Welcome to your latest Cleveland winter. To get you through, we've sniffed out four mini vacays for your soul — all for less than the cost of a tank of gas.

Hail to the Chiefs

One football coach finds out why the hours are worthwhile.

If you ever marveled at the giant Hulett ore unloaders that once stood along Whiskey Island, you're going to love this.

Two events showcasing handmade local products promise to bail you out of your gift-buying rut.

George Voinovich may be retiring at the end of the year, but his time as mayor will live on as the defining moment of our political landscape.

Chad Zumock's LeBron commercial spoof isn't the most talked about, but it was first.

Dick Houston has been fascinated with Africa since childhood. Now, he's working to protect one of its most visible symbols for future generations.

Three comedians we recommend this month.

Forget all about the holidays with three Scrooge-approved shows.

A holiday spectacle arrives at the Palace Theatre.

Comedians will have you laughing through the holidays.

Terry Pluto mines fan memories in an attempt to explain our devotion to the Cleveland Browns.

Tom Fulton spent more than three decades acting, producing and directing in Cleveland theaters. But only as the director of the Chagrin Falls Performing Arts Academy — an acting school for high school juniors and seniors — has he found his most satisfying

Ice fishing is as much about the solitude as reeling in the big catch, but that's great too.

How to Build a Fire

How to Build a Snowman

It's Called A Snow Wedge...

Here's one New Year's Day tradition sure to send shivers down your spine.

The Case for Winter - by Brianne McLaughlin

The Case for Winter - by Katie Marquard

The Case for Winter - by Tonia Kwiatkowski

Where to Find Carriage Rides

Where to Find Cross-Country Skiing

Where to Find Outdoor Ice Skating

Where to Find Places to Golf

Where to Find Snowshoeing

Whether it's with research that may one day help vanquish breast cancer, a robotic arm that offers a better knee replacement or a simple strategy that dramatically changes how we experience the emergency room, Northeast Ohio's hospitals are pushing to imp