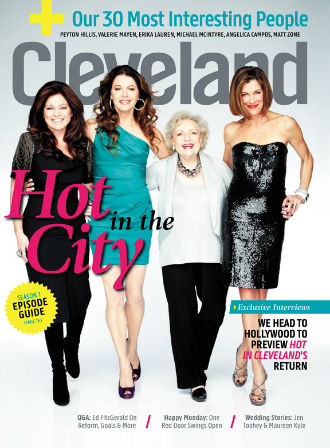 A Dish We Love

Get advice for planning a last-minute getaway.

Winemakers Ed and Gina Trebets unveil two wines for a worthy cause.

Landmark moments from our past.

Ed FitzGerald talks about his plans to reinvent Cuyahoga County government, his relationship with Bill Mason, his son's cancer and how he's helped the FBI's corruption investigation.

As Ed FitzGerald becomes county executive this month, Cleveland's past few decades offer a cautionary tale: Arrogance destroyed some of our most promising leaders.

They look good enough to eat, but these gourmet treats are for your pup.

Another Round of Laughs

Powered by the unstoppable celebrity of Betty White and her three co-stars, Hot in Cleveland became cable's highest-rated sitcom in its first season. We head to LA to catch up with the cast and find out why we're so funny.

Find out what's new, old, gone and wrong in Hollywood's version of a Cleveland home.

Murals in Parma are a nod to its culture.

Kick off the new year with these fun items geared to help you stick to your resolutions.

Founded by two women with a passion for dress-up, Lizzy & Jane recalls the glory days of fancy feminine attire.

Kids A to Z

Co-owner of Greenhouse Tavern with chef/husband Jonathon Sawyer and blogger at chefswidow.com
Mom to Catcher, 5, and Louisiana, 3

Kids A to Z: Denise Zarrella

Kids A to Z: Expert Insight

Kids A to Z: Meet Moms

Kids A to Z: Nicole Marcellino

Kids A to Z: Terri Libenson