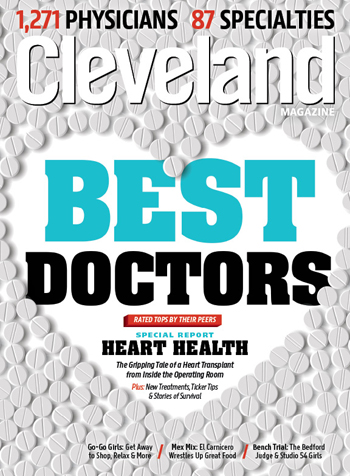 Fight off those end-of-winter chills with one of these six satisfying soups.

With journalism at a low point in Cleveland, a weekly newspaper under new ownership has an opportunity to make a difference.

Close to the Heart

St. Patrick's Day can be a blur for many, so we focus our Irish eyes on last year's numbers.

Kevin Kelley's election as City Council president may bring more than just a shift in leadership.

The Bedford Judge and the Brothel Bust

Judge Harry Jacob III promised to bring greater integrity to Bedford Municipal Court. He seemed like the guy next door — family man, soccer coach, gentleman. Now he's accused of frequenting a brothel, accepting sex as a bribe and promoting prostitution — a charge often used against pimps. What really happened when he met the Studio 54 Girls?

Tower City Cinemas may have gone all digital for the 38th Cleveland International Film Festival, but 35 mm film has not reached the end of its reel in our town. Two movie buffs tell us what's to love about both film and digital formats.

In honor of National Reading Month, we find books as they exist in the wild.

Fall for these four flicks at this year's Cleveland International Film Festival.

The Spa at Bayfield offers relaxation with Victorian touches that stay with you no matter how crazy things get.

Fulfill your need for speed at Charlotte Motor Speedway.

See if your baking skills measure up at an Ann Arbor bread class.

An exclusive look inside the operating room reveals how the highest-rated heart care program in the nation gives one patient a second chance at life.

It cost more than $5 million to build and is one of only two of its kind — and they're both at the Cleveland Clinic's Heart & Vascular Institute. The latest of the clinic's hybrid operating rooms, which opened in July, allows cardiologists, cardiothoracic

The swift actions of MetroHealth's Dr. Sanjay Gandhi and first responders gives a marathon runner another chance to see the finish line.