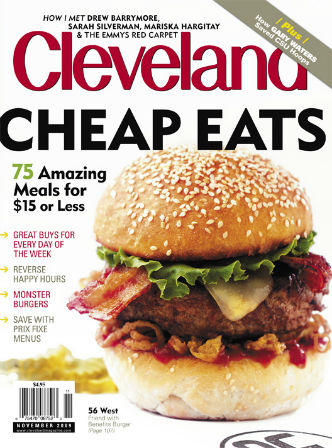 We tightened our purse strings and loosened our belts on the hunt for hearty meals at a nice price. From $5 steals to $15 meals, we found great values at neighborhood spots and downtown destinations alike. Just because the economy may be in the dumps does

You don't have to eat on the go to snag a great price.

A few more bucks can fill your plate and your stomach.

Cheap Eats: A Week of Specials

A good deal for every day — for more dining specials visit clevelandmagazine.com

It happens to the best of us — that after-work happy hour drink stretches into a happy evening far surpassing the $1 draft and $5 cocktail deals. But just like everything in life, happy hour now also comes full circle in the form of late-night speci

Happy hours are for more than just drinking. We ended our workday at three upscale restaurants to prove you can try
some of the best places in the city for $6 or less.

Beef between two slices of bread — on every menu, the hamburger has the potential to be boring and bland or exciting and tasty. No two are created equal, and these three are in a category all their own. And all are less than $10 (side included ̵

You long ago graduated from buck-a-bottle happy hour deals, but that doesn’t mean you don’t like a great drink at a good value. Here are a few of our favorites.

Cheap Eats: The Fixe Up

A few multicourse prix fixe deals are really steals under the guise of a double-digit dinner. We did the math (regular prices are in parentheses). Just order, taste and enjoy.

Charlie Carr, city councilman for 30 years, got his start by promising to protect the numbers racket. The skillful, wily leader also helped make Cleveland the birthplace of the black political rights movement.

Writer Andy Netzel flew on the Zero-G airplane in September. The commercial flight is similar to the one NASA uses to train astronauts. The flight takes off from major cities throughout the country and costs $4,950 per seat.

As he looks to retirement in 2010, Cleveland Metroparks executive director Vern Hartenburg talks about his 21 years of watching over the Emerald Necklace.

We watched last March as Cleveland State made its first trip to the NCAA basketball tournament since Kevin Mackey and ‘Mouse’ McFadden in 1986. We cheered as the Vikings completed an impossible first-round upset of Wake Forest. But unless you

Abby Bays Rea, the sister of How I Met Your Mother co-creator and Shaker Heights native Carter Bays, attended the 61st Primetime Emmy Awards with her brother in September. She reports back on her unforgettable evening (even if 30 Rock did spoil the fairy-

Christmas with a Kick

Familiar Sounds From Your TV

Something to Talk About