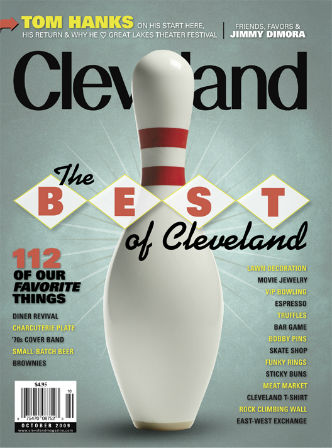 Andy Bindernagel swore off shaving to raise cash for charity.
Nine months and $2,000 (and counting) later, he’s yet to pick up a Bic.

Life of the Party

The most social of leaders, Jimmy Dimora built a career on connections and loyalty. It helped him turn Cuyahoga County’s Democratic Party into a nearly unbeatable machine. It may also be his undoing.

Our Kind of Guy

The Marquette & Bessemer No. 2 disappeared in a winter storm 100 years ago, but shipwreck hunters Mike and Georgann Wachter are still enthralled by the mystery of why Lake Erie’s largest ghost ship has never been found.

Our writer signs up with the crime-fighting Guardian Angels and learns a lesson about not living in fear.

What I Did Over My Summer Termination

Photographer Jeff Biggar brings nature to life with his images.

Film Review: More Than a Game

Life According to Tom Hanks

Tom Hanks relives and shares life lessons from his time as an actor for the Great Lakes Theater Festival in this piece from 2009.

15 ideas for making your decorating, shopping and entertaining a little easier this year

The 2009 topDentists resource is your guide to more than 300 of the best dentists and specialists in Greater Cleveland.

Local college students get an inside look at Cleveland with a reality game show.

Welcome to the Real World

Schools are extending their reach by taking the classroom to the world — constructing chicken coops for a Tanzanian orphanage, giving mini-loans to grocers in the Dominican Republic and rebuilding a school in Nicaragua.