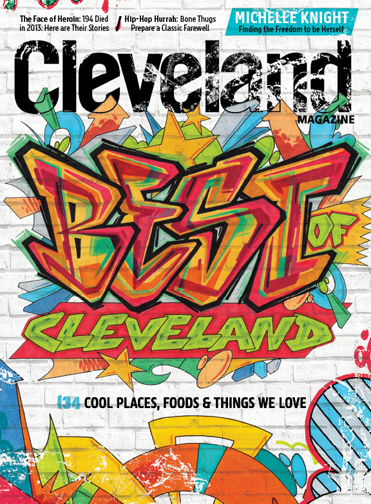 With Cleveland Beer Week starting Oct. 10, we take a look at our city's craft beer lineage.

Warm up with one of these chili recipes.

Taking a chance on revitalization, the Standard raises the bar in Collinwood's East 185th Street scene.

Melissa Koppel turned to pain medication to relieve her severe migraines and became addicted. She eventually started using heroin. A year later, she became one of the drug's many victims.

Overdoses claimed 194 fathers, daughters, spouses and friends in 2013. They danced, they labored and they left others behind.

In 2013, heroin took the lives of nearly 200 people in Cuyahoga County, more than who died from homicides or suicides.

Heroin's toll extends far beyond statistics. It infects communities and devastates families. Here are the stories of those lost.

Abracadabra! MetroHealth resident Angela Funovits has a bewitching bag of tricks that landed her on Syfy's Wizard Wars.

A year and a half since her liberation from Ariel Castro's prison, Michelle Knight has traveled overseas, written a best-seller, made new friends and created a new life for herself in Cleveland. Despite her physical and emotional hardships, she's striving to help others find courage and strength.

Legends of the Fall

For a century, Tom L. Johnson's statue has guarded free speech in Public Square. Now we're uprooting him. What's next?

WCPN's @NickCastele mixes a reporter's eye with the wit of a late-night TV host.

Architect Miguel Rosales has four pedestrian bridges on the drawing board for the city.

Bone Thugs-N-Harmony bow out of the hip-hop scene with a special hometown show.

Monica Potter ends her run on an NBC drama and puts roots back in Cleveland.