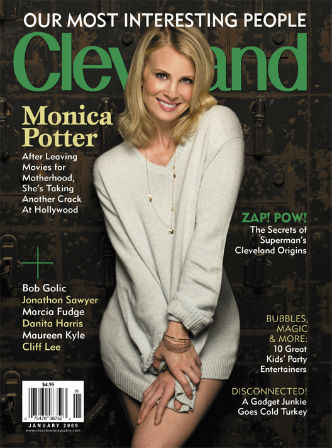 Perfect for the fireside or with chocolate, Port makes a great companion on winter nights.

Scott Hamilton is no stranger to Cleveland. Every fall, he returns to host a benefit for the Clinic’s Taussig Cancer Institute. Now he’s back as an analyst for NBC’s coverage of the U.S. Figure Skating Championship at Quicken Loans Ar

You may already know that two Glenville High School students created Superman here in the 1930s. But Brad Ricca delved into the origins of the two teenage creators for his film Last So

Technology, ticket costs and a shifting fan base have created the culture of the sports bar, and no place embodies it more than the Winking Lizard.

In 2006, Medina police officer Daryn Winebrenner responded to a call of a rape in progress a few blocks from the police station. The 12-year veteran raced to the ranch house to find a 14-year-old girl naked and crying in the driveway. She told him her unc

We live in an always-on world of remote controls, cell phones, cable TV and computers, advancements that make our lives easier, more enjoyable. But do they? One man was brave enough (or maybe just crazy enough) to chuck it all away for a month, giving up

The Death of Michel Siegel

The Girl Next Door

Monica Potter is one of us. So much so that even after relocating to Los Angeles and starring in movies opposite Robin Williams and Nicolas Cage, she moved back to the Cleveland neighborhood where she grew up. But walking away from Hollywood was now

The Inspirations for Lois Lane

Christian Wulffen’s MOCA exhibit, It Is, It Is Not, contemplates how we gather information and decipher the meaning of even basic objects.

Anasterisk Gallery recently asked artists who grew up here for their gritty depictions of the Cleveland experience. We’re still not sure what to make of the result.

A vision for what your home could be likely involves a large-scale renovation. We talked to three homeowners who reinvented their living spaces and gave new spirit to their homes.

The Heart of Indy

If checkered flags and speeding cars don’t get your motor running, check out the softer side of Indianapolis for a romantic weekend.

From clowns to jugglers to bubble blowers, Northeast Ohio’s favorite entertainers are magical at creating your kids’ memories.