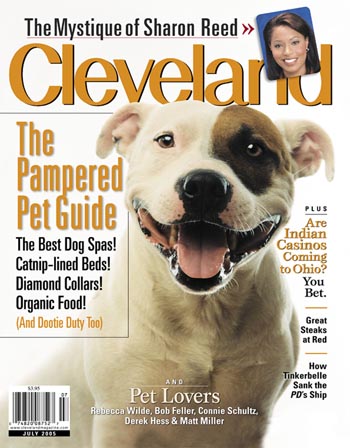 Takes the Steak: Red the Steakhouse

Bark if You're Spoiled

Why would the state of Ohio cut an Indian tribe from Oklahoma in on the potential millions of dollars to be made from gambling? We took a thousand-mile trip to find out the surprisingly short answer: Ohio may not have a choice.

Park Place for Your Pooch

In a town known for its Dawg Pound, would you expect anything less than full fanatic obsession with our furry (or feathered or finned) friends? So to keep your tail wagging, we go in search of the best in organic food, catnip-lined sleeping mats, doggie m

From the Plain Dealer's circus-like '60s era newsroom emerged Robert Manry, pilot of the sailboat, Tinkerbelle, whose unlikely Trans-Atlantic journey led to one of his newspaper's darkest, most entertaining days.

The Mystique of Sharon Reed

The Channel 19 anchorwoman hasn't just reported the news. She's made it. She's been on "Letterman," been seen with De Niro, gotten nude to report on Tunick. Now Cleveland Magazine goes behind the glass in search of Sharon Reed. (She even undre

High Spirits for a NEO summer

We've seen the dream houses they build for other people. But what do they build for themselves? We went inside the $1 million-plus homes of three local builders to show you.

Check out these four high-end home items that'll have the neighbors drooling.

The Call of the Wilds

White rhinos, bison, oryx and other endangered species take refuge in Ohio's heartland -- and you can too.

From simple whitening to advanced neuromuscular techniques that could finally cure those headaches, what advances in cosmetic dentistry mean to you.

For the Health of It

Plastic surgery can improve your physical well-being, whether you want to banish that stubborn beer belly or need to completely reshape the way you look and feel.