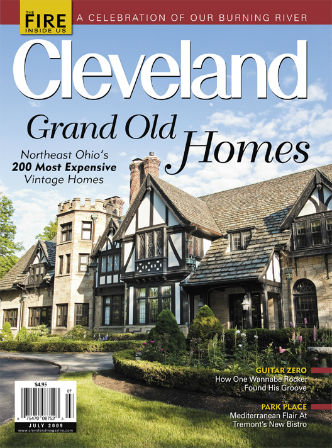 New Kid on the Block: Bistro on Lincoln Park

Dropping 350 Pounds and a Dream

During the summer of 1956, Akron native Peter George prepared to defend his Olympic gold medal in weightlifting. But one heft at a Honolulu high school changed the 27-year-old Army Dental Corps captain’s world.

Maybe asking a 77-year-old environmental reporter to squeeze through a fence and navigate uncut grass in the Flats was a bit much to ask, but Betty Klaric just shrugged: Lead the way. Klaric is considered the first major newspaper reporter to cover the en

Roughly 90 percent of beer is water, so it’s easy to understand why the co-owner of Great Lakes Brewing Co., Pat Conway, is obsessed with making sure it’s clean. Conway, a water preservation advocate, hosts the Burning River Fest, an environme

We asked 11 Clevelanders how they think the fire has changed the city’s view of itself. Here are their tales of shame and perverse Cleveland pride.

Trade the horse for a bike and the mallet for a modified ski pole and you’ve got an idea what the Pedal Republik of Cleveland is all about. Two matches and one bloody thumb later, our writer discovers why the regulars keep coming back.

Let’s clear the air: Hack comedians, bad timing and a healthy dose of myth set our river fire loose on the nation. Forty years later, we’re taking it back.

Louis Stokes was a freshman congressman representing Cleveland in June 1969 when the Cuyahoga River caught fire for the last time. In 1970, he convinced Congress to approve an innovative program to clean up the river: The U.S. Army Corps of Engineers was

Our writer travels back to his childhood in Cleveland’s Cedar-Central Apartments, one of America’s first public housing projects.

A Work of Art

After eight years, Dan Bush has turned 78th Street Studios into an arts mecca for Cleveland’s West Side.

Can a 53-year-old with no musical experience live out his rock ’n’ roll dream? With a little help from an over-the-hill keyboardist, a 10-year-old drummer and rocker Sonny Geraci, our writer makes one last grab for greatness.

Piecing Together The Past

In 1941, the federal government paid artist Elmer Brown to paint murals depicting the men and women who built our city. Years of neglect and countless hours of restoration later, the Depression-era artwork will soon get a second life inside Cleveland Stat

Though it’s a down economy, Northeast Ohioans are looking carefully at details when sculpting the homes in which they dream of spending the rest of their lives.

These are the homes you drive by in wonder. Because you know there’s a story —many stories, actually — inside those walls. And you know there will be details that will delight you. Not a basketball court or a home spa — those belon

The Masterpiece on South Park Boulevard

Get a dose of Sanity with trendy options for men and women.

A down economy and elective dentistry isn’t the best mix. But Cleveland-area doctors are reporting both structural fixes and affordable, aesthetic upgrades among their top picks for what's popular now.

It was a tough 2008 for the cosmetic surgery industry, with the overall number of procedures seeing the first double-digit percentage drop in a decade. But a growing interest in smaller, more affordable options and a tough job market in which people are s