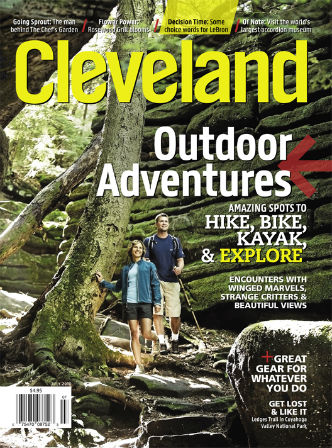 Case of the Mondays

Rosewood Grill packs in patrons eager for a hearty meal at a good price, and it doesn't disappoint.

Landmark moments from our past

Dozens of people may be headed to federal prison in the biggest corruption case in Cleveland's history. Their defense is that everyone else was doing it, so why was it a crime?

First, they made a film about a fictional comic-book junkie. Now, Ted Sikora and Milo Miller are writing a real comic inspired by their main character's alter ego.

George Vlosich wasn't around to see the Etch A Sketch hit the market 50 years ago, but he has transformed the kids' toy into an artistic canvas. The 31-year-old's permanent creations sell for thousands for dollars and have captured the attention off Jerry

Son of the Soil

Lee Jones was 19 years old when his family lost its farm because of high interest rates and commercial competition. Today, his Huron, Ohio-based Chef's Garden is a thriving, "beyond-organic" business that grows niche produce for restaurants throughout the

Look for creative upgrades and improvements along the Theater District's East 14th Street.

Summer in a Jar

The Music of Their Lives

Inspired by history and love, a Rocky River couple operates the largest accordion museum in the world — out of their basement.

A Columbus lawyer's call for a bridge to Canada might not be as absurd as you think.

There's no better way to celebrate our nation's independence than with some patriotic pyrotechnics. Follow our Fourth of July plan, and get your fill of fireworks all weekend long.

HotChaCha takes its fun and feisty rock on the road.

Step into the great outdoors with some fun gear, and enjoy nature whatever way you choose.

B. Lux Boutique brings fun and feminine fashions to First and Main.

Choose Your Own Adventure

The arrival of the hot and sunny heart of summer means it's time to get out and explore. Hit the water, pedal the day away, or set off through the forest on foot. We've scouted out 60 ways to make the most of the longest and most beautiful days of the yea

Misunderstood animals (and insects) are the main draw at these park events.

Trade the flip-flops for sneakers at one of these summer races.

You'll still hear some great tunes at the site of the Richfield Coliseum — but these days they come from a different kind of animal.

Want to know where they're biting along Lake Erie? We sought the wisdom of a 71-year-old who's been casting lines for almost six decades.

How to Pitch In for Our Parks

Our marshes and swamps are prime spots for finding critters. They're also a crucial part of our ecosystem.

Want an up-close look at Ohio in its natural state? All you need is a friend, a sunny afternoon and our advice.

Whether you're taking an afternoon hike or spending serious time in the woods, the right gear is essential.

Sure, the journey may be the most important part, but having a destination makes everything a lot more fun.

City slickers with cabin fever don't have to possess the spirit of Pocahontas or the adventurous streak of John Smith. Our parks have a range of options for overnight visitors whether you want to take in the outdoors settler-style or rough it in a histori

Where to ... Pick Your Own Fruit

Whether you prefer berry-laden American flag cakes or strawberry pies, fruit is a summer necessity. Picking your own is both fun and inexpensive. "There's very little structure," explains Bill Patterson of Patterson Farm in Chesterland. Here are four plac

Great views don't just happen. Mostly, they're a product of time (as in millions of years), flowing water and a well-marked trail. Here are three postcard-worthy vistas to enjoy while you're out adventuring. Don't forget your camera.

Interest in cosmetic dentistry is also picking up again, and there are now more options than ever for getting the smile you've always wanted.

After a difficult couple of years, Cleveland-area cosmetic surgeons are seeing an increase in patientsready to invest in their appearance.