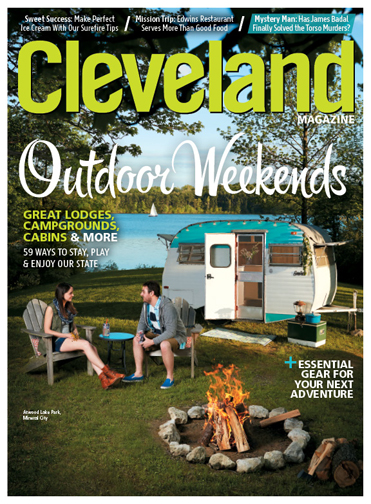 Stay cool with these sweet guidelines to homemade ice cream.

Menu with a Mission

Diamond in the Rough

The $6.3 million renovation of League Park creates a jewel for the city and baseball fans.

Is Johnny Manziel a savoir or just another figure in our history of failed quarterbacks?

If you've always dreamed of owning a bar, two iconic watering holes are for sale.

With interest in urban living on the rise, several new residential options are being developed in neighborhoods surrounding downtown.

The growing movement against Chief Wahoo evokes memories of the 1970s, when militant Native Americans protested the team's logo and took over Mount Rushmore.

Move over, Hollywood. Independent filmmakers take over the city for the 48 Hour Film Project.

Before 24-hour animated marathons, there were cherished Saturday mornings with Bugs Bunny, Road Runner and Tweety. Without a time machine, you can recapture that innocence through Still Looney After All These Years. The five-part program will sho

Urban Home & Garden creates unity between the indoors and outdoors with whimsical accessories.

Prevail over packing for your next camping outing.

We’re going on a camping trip and we are bringing … all of these items.

From pitching a tent to glamping, there's an outdoor adventure for you.

Rough it like a pro with these step-by-steps on building a fire, stargazing and cleaning a fish.

Get moving with activities from hiking to waterskiing.

Achieve a more youthful appearance with these advances in plastic surgery.