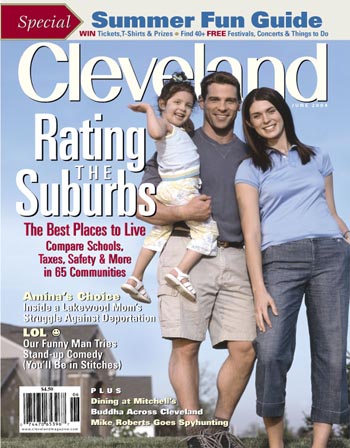 John Balash never stopped playing with blocks. Earlier this year, it earned the 21-year-old Geneva native a chance to compete for the job of a lifetime.

For years, immigrant Amina Silmi battled the government in a desperate attempt to remain in this country with her three children. This winter, she was finally ordered to report for deportation, forcing her to decide the question she'd always been too frig

An editor, a writer and a salmon walk into a restaurant• But this time, the joke's on us. We asked the funniest writer we know (maybe we should get out more, huh?) to try his hand at live comedy. And we discovered that our mothers were wrong: It real

On Nov. 11, 1944, Lt. Henry Francis Minco, a Clevelander in the U.S. Army Air Corps, went missing on a mission over Thailand. Almost 60 years later, a squadron mate's unexpected phone call sends us reaching back through the fog of war to remember Minco's

James M. Wood was always a mysterious and elusive writer. But could he also have been a spy? We do a little investigating of our own.

A new enclave of retail, restaurants and entertainment is taking shape on East Fourth Street at Euclid Avenue.

Upon learning that Cleveland was named one of the nation's 10 best walking cities, we set out on foot with local tour guide Karl Johnson to get a fresh look at our town.

Time for the Change

You gotta know where and how to party.

We examine 65 area communities for schools, safety, taxes, home prices, services and more. Plus, we talk to local families about their living in their communities.

Our annual survey of community services