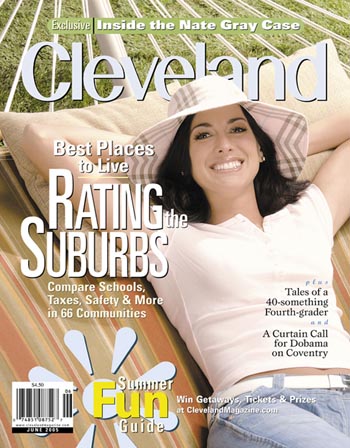 A Taste of Downtown: Downtown 140

Yes, duct tape really can be used for everything. Even making art, as Todd Scott is set to show thousands of people at this month's Avon Heritage Duct Tape Festival.

Inside the Nate Gray Case

He was once the trusted friend and adviser of former Cleveland Mayor Michael R. White. Now Nate Gray faces 45 federal charges. If they prove true, the trial could unlock the biggest political scandal to hit Cleveland in decades.

Tales of a Fourth Grade Nothing

Boy, it seems like school is a lot tougher than it used to be. But we wanted to be sure. So, on his 35th anniversary of being in the fourth grade, our writer tags along with his son for a day of bus rides, math problems, wallball and lunchroom negotiation

There Goes the Neighborhood

Coventry loses Dobama Theatre this month, but what does it gain?

Auteur on a Wire

The value of a tolerant outlook

We all know the suburban stereotype: a boring, cookie-cutter community where everyone thinks alike and buys the same link of picket fence. But if our Sunday-night obsession with "Desperate Housewives" has taught us anything, it's that the stereotype needs

Looking for charm, adventure and relaxation all in one â€” and close to home? We found you neednâ€™t have fly-fishing experience to reel in fun at Sunnybrook Trout Club.