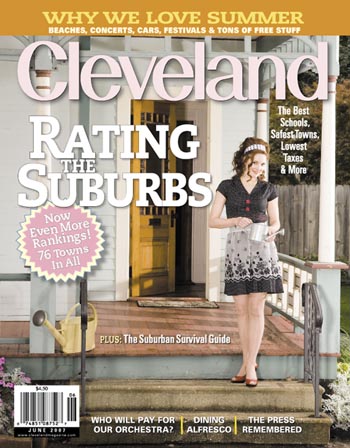 Pairing friendly whites with grilled foods will have your taste buds racing.

It's time for a cold drink.

In a shocking upset, Cuyahoga County elections officials are held accountable for bungling our right to vote.

We have a bumber crop of farmers' markets.

Worth Your Time: Thyme

You can eat your way around the world.

Behind the Lens: At the Cleveland Press feature photo shoot.

The June 2007 issue of Cleveland Magazine features a look back at The Cleveland Press. Associate editor Andy Netzel, who wrote the story, also attended the photo sh

The Cleveland Orchestra is in a financial crisis, and the plan to fix it isn't going as well as anticipated. Can one of Cleveland's most beloved institutions (even by those who've never seen the inside of Severance Hall) recover?

Life According to Eddie Levert

Lord of the Swing

I never thought I’d move to a subdivision in a suburb like Avon. But my kids found community there, and so have I.

Hinckley resident Bob Nieto hated seeing his 1966 Alon Aircoupe sitting unused in its hangar. So he decided to sell the two-seater propeller plane to someone who could use it more and to rely on rentals to take care of his flying impulses. Before parti

When the Press Was News

The Cleveland Press was more than a newspaper. It was Cleveland -- from its emphasis on community to its homegrown staff. Twenty-five years after the final edition, our affection has not faded. Here, reporters, editors, and local leaders share the story behind the stories and remind us why we love the Press.

A Jury of their Peers

Art takes its turn in the sun

Our annual mash up of art and technology

Picknicking with the Orchestra

Promotional photo from the late 1940s of Bill Hawkins (top) on air at radio station WHK. W. Allen Taylor (bottom) portraying his personal alter ego — a DJ named “The Kid,” with a background photo of himself as a youngster.

The best summer movies are shown outside.

The Boys of Summer

A new exhibit brings a rare trove of Beach Boys memorabilia to the Rock and Roll Hall of Fame and Museum.

The cars come out.

The worlds best roller coasters are an hour away

University Circle takes it outside

We have a bunch of home teams to root, root, root for.

Check out your neighbor's open house without looking obvious.

Help! My son's Little League coach keeps flirting with me.

How to keep the coyotes (or other, less scary critters) at bay.

How to throw a great backyard get-together

How to welcome a new neighbor

Is it OK to discipline other people's children?

Keep your family safe in a fire.

It turns out glass, steel and slate aren’t cold at all. They’re inviting and cozy — the perfect backdrop to a Tremont home that is at once a personal museum, entertainment mecca and place of respite.

So your neighbor's fence is on your property. Now what?

The best holiday decorations are inflatable

The Truth is you've seen your neighbor naked

There are Treasures to be found on the tree lawn

Win with the zoning board.

You caught your neighbor cheating.

Your neighbor's hot tub is the coolest

Scattered around Ohio are thousands of little blue markings that can lead you on a Thoreau-esque, 1,400-mile trek otherwise known as the Buckeye Trail.

How many other cities have their own islands?

We have a national park in our backyard.

You can run just for fun.

You can take your workout outdoors.